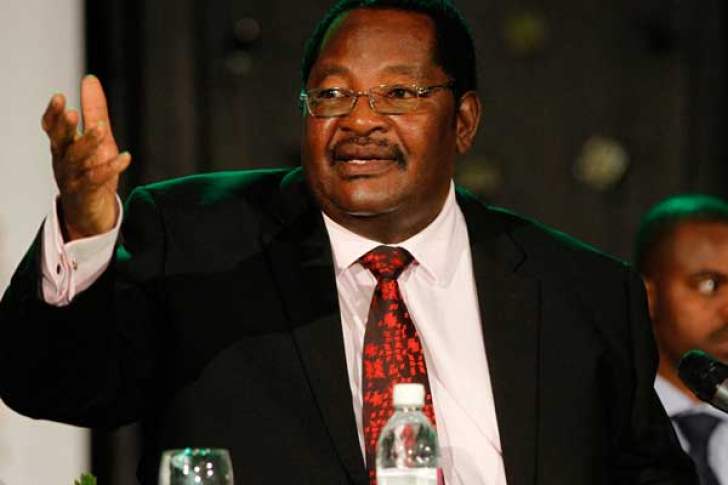 UTTERANCES by Zanu PF secretary for administration Obert Mpofu (pictured) dismissing Gukurahundi as a “thing of the past” and telling victims to forget is tantamount to attempting to whitewash the genocide that killed an estimated 20 000 people in Matabeleland and the Midlands.

The burial of Chief Mabhikwa, born Vusumuzi Khumalo (35), over the weekend in Lupane sparked debate on the Gukurahundi massacres often spoken in hushed tones and behind closed doors.

Mabhikwa, himself an ardent advocate for truth-telling, peace, and reconciliation, according to the Reverend Useni Sibanda, had been working on bringing finality to the issue.

In life as in death, Mabhikwa’s passion to solve the 1980s Gukuruhandi, described by the late Robert Mugabe as a “moment of madness” was topical during the funeral.

While Vice-President Constantino Chiwenga exhibited a reconciliatory tone as he presented his speech, Mpofu was the villain, telling victims of the atrocities to forget about the “past”.

“What I request from you our people is that while we build, we should not be removing sticks from the fire; let us build,” he said.

“There are some people who have time to talk about bad things instead of talking about good things. Something painful does not build. Whenever you remind people about something painful, you are not building but destroying.”

He added: “We are the ones leading people, and we are the ones voted for by the people. People do not want to be always reminded about painful things. They want development going forward.”

Mpofu’s speech betrayed denialism of a dark era in the country’s history, which even the 1987 Unity Accord has failed to address.

Mpofu missed an opportunity to speak out on the issue, highlighting its importance in present-day Zimbabwe where thousands are still reeling from the effects of the atrocities which include trauma, statelessness, and physical wounds.

“Some people now live on criticising things which they don’t even know how they were handled,” he said.

“We are the ones who live where those things happened.  I speak as your child and as a leader in Zimbabwe.”

The Zanu PF secretary for administration forgets that a nation in built on truth-telling and sincere reconciliation.

It is unfortunate that those who are supposed to be vanguards of democracy are complicit in whitewashing heinous crimes.

Rwanda is an example of how a sincere process of truth-telling can lead a nation on a path to recovery and growth.

The 1994 genocide against the Tutsis was treated with the urgency it deserved, as the Rwandan government worked with international bodies to hunt down fugitives indicted in the crimes.

But 35 years after the brutal 5 Brigade killed innocent people in Matabeleland and the Midlands, the government is still skirting around issues of accountability.

No formal apology has been made by the government or those directly involved in the operation that led to the brutal killings.

President Emmerson Mnangagwa, who was the State Security minister in the early 1980s, has also not offered a formal apology to those affected.

However, he has set in motion meetings for chiefs, communities and the National Peace and Reconciliation Commission (NPRC).

The NPRC, led by retired Justice Sello Nare, has somewhat failed to kickstart the process, while traditional chiefs remain muzzled in their quest to bring up such issues.

Despite the efforts by the state to gag individuals and groups seen to be vocal on Gukurahundi, including Ibhetshu Likazulu who had their memorial placard destroyed at Bhalagwe last year, the fact remains that someone needs to account.

Mpofu’s remarks are unfortunate and should be dismissed as reckless, especially by a man who masquerades as a senior statesman.

“Obert Mpofu is offside in his cynical and insensitive request that victims of the Gukurahundi genocide simply forget about what happened and move on. Forgetting and moving on are enabled processes that are accompanied by truth telling and closure for the families some of whom are buried in mass graves and compensation to those who are living. These are some with phycological wounds,” political analyst Rashweat Mukundu said.

“If Obert Mpofu and the ruling party are serious about this matter, they should be transparent in the process of healing and compensation of victims.”

He said whitewashing Gukurahundi would only boomerang on future generations as it breeds anger and resentment among the affected.

“The matter is not going to die because politicians wish it could. Tragedies of such a nature are generationally transferable so frustration, anger, hate and the sense of isolation is transferred from generation to generation,” Mukundu said.

“If the government is serious, they should put a break on its transference. Just politicising this matter and accusing people of stoking tribal tensions and of not being forgetful can only be done by the axe which has cut down the tree. The tree will never forget.”

Bulawayo-based political analyst Dumisani Nkomo said: “There must be a serious, independent truth telling process grounded in a solid legal framework to deal with this issue.

Current processes, including the chiefs’ process and NPRC, fall short due to the fact that they are not fully independent and do not have sufficient legal infrastructure.”

While Mpofu was widely vilified for his insensitivity towards his own people, Chiwenga struck a reconciliatory tone during his speech.

He scored political points by identifying with the people of Matabeleland, claiming he is a nephew of the Khumalos.

The Khumalo clan were also a victim of the Gukurahundi atrocities.

Chief Mabhikwa senior (Vusumuzi’s grandfather) and a group of elders were intercepted by the 5 Brigade on the Bulawayo-Victoria Falls Road. They were frog-marched into the bush and killed. They were on their way to Bulawayo from Jotsholo to bring home the body of Chief Menyezwa Gumude for burial when they met their death.

“I heard the Reverend (Useni Sibanda) talking about unity and people of Zimbabwe uniting as Zimbabwe is a unitary State,” Chiwenga said.

“He raised the issues which happened, which were bad and which we are looking into. The President and the Chief’s Council are dealing with these matters every time and a solution will be found as we are all Zimbabweans.”

Rev Sibanda had said: “I believe it’s time for Zimbabwe to be healed. It’s time for healing for Matabeleland. Time does not heal wounds, but speaking the truth about what happened will heal this nation.”

Related Topics:gukurahundiObert Mpofu
Up Next

Time running out for electoral reforms