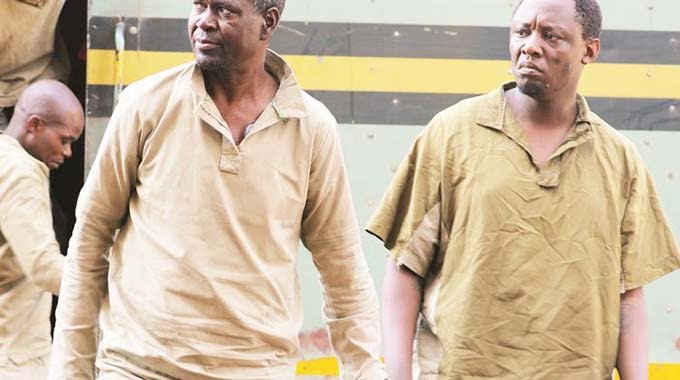 AN incarcerated former senior staffer in President Emmerson Mnangagwa’s office has been moved to Connemara Open Prison nearly a year into his four-year sentence, The NewsHawks has established.
BERNARD MPOFU
Since taking over from long-time leader Robert Mugabe, Mnangagwa has promised to tackle corruption among other reforms. But critics have cast doubt on his anti-graft drive, saying it is mainly targeting political foes and less prominent government officials.
Douglas Tapfuma (pictured left), former principal director of State Residences was last June jailed for an effective four years and had six vehicles forfeited to the state after he was convicted on three charges of criminal abuse of office.
Last week, it was reported that Tapfuma had his appeal against conviction and sentence dismissed.
Security sources told The NewsHawks that Tapfuma, who was serving time at Harare Central Prison, was moved to the Midlands-based holding facility, near Gweru.
“He was moved in early May. It is the prerogative of the member-in-charge of the prison where the inmate is currently detained to decide whether an inmate is eligible for Open Prison. Tapfuma qualified,” a source said.
According to sources, when prisoners arrive at Connemara, they are placed in the “command cell” in groups of 20 per dormitory for easy supervision. Later they are transferred to “single cells” where inmates stay in their own cubicles.
Meya Khanyezi, the Zimbabwe Prisons and Correctional Service (ZPCS) spokesperson, could not be reached for comment at the time of going to print.
Harare regional magistrate Esthere Chivasa had initially jailed Tapfuma for two years on each count before suspending two years. She declared the forfeiture of six cars: a Toyota Hiace, Toyota Altezza, BMW 318i, Nissan Tiida and two Honda Fit vehicles — out of the eight cars he imported.
During his tenure as principal director of State Residences in the Office of the President and Cabinet, Tapfuma imported the eight vehicles using bills of entry exclusively reserved for bringing into the country the President’s personal goods and for the government. By doing this, he avoided paying duty.
Two out of the cars Tapfuma imported were donated to Kwekwe Hospital as ambulances.
To try and complement the non-custodial options, the ZPCS introduced the open prison system, which is anchored on the principles of rehabilitation, counselling and re-integration of inmates.
Connemara was established in 2003 and some of the high-profile inmates who have served time at the facility include former Zimbabwe   Football Association boss Rafik Khan who in 2006 was convicted for breaking into and stealing a car.
Prisoners who benefit from the open prison system are chosen by a selection board and enjoy additional privileges which are not enjoyed by those at closed prisons such as free movement; less supervision during work; permission to visit families upon application; late lock up; television viewing; access to telephone and opportunity to attend lessons at colleges within the vicinity of the open prison.
Related Topics:
Up Next

Judges who ended Malaba’s tenure are no pushovers