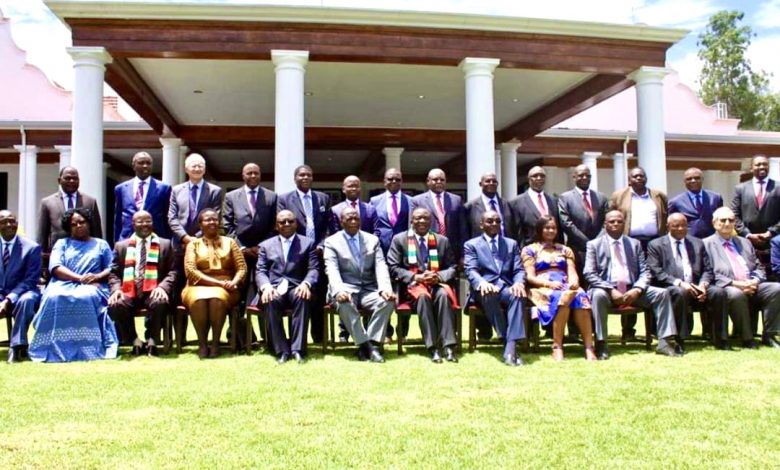 Official sources say Ncube, who quit after he was denied radio and television licences by the government – part of his motivation for supporting Mnangagwa – has been replaced by Professor Lindiwe Majele Sibanda, director and chair of the African Research Universities Alliance Centre of Excellence in Sustainable Food Systems at the University of Pretoria, South Africa. Sibanda also serves as a policy adviser to numerous other African governments and global institutions.

It now transpires that Ncube, who lost control of his South African Mail & Guardian media house in 2017 before rushing back home broke to join Mnangagwa’s gravy train, while battling to revive the shrinking fortunes of his struggling AMH media empire, was frustrated by government’s rigid anti-reform approach and his failure to get radio and television licences, as well as derive financial benefit and influence he had hoped for.

Ncube, who has always shown interest in politics, although poor at political praxis, also wanted to leverage his media group to exert insidious influence at the heart of Mnangagwa’s government Rupert Murdoch-style. His approach openly showed he wanted to become a media mogul and political influence peddler.

The sources say Ncube was further spooked by the murder of his close friend, the banker Douglas Munatsi, who was killed by suspected state agents in November last year.

Munatsi, a close Mnangagwa associate who helped Ncube to buy his newspapers, was appointed Zimbabwe Investment and Development Agency chief in 2020.

Latest information obtained by The NewsHawks this week shows Pac has all but crumbled, with most of its members frustrated, others no longer committed and some contemplating resigning in exasperation.

Ncube resigned in acrimony, hence his bitter tirades saying Mnangagwa was worse than the late former president Robert Mugabe. He said he had initially supported him thinking as Mugabe’s protégé and enforcer he would reform and change things for the better, including addressing past atrocities like Gukurahundi.

“Pac virtually collapsed way before Ncube left. Ncube’s departure months ago, which he confirmed at the beginning of March in South Africa at the BizNews Conference in the Drakensberg, just makes a bad situation worse,” a senior Pac member says.

“It worked at the beginning as most members attended meetings. We were supposed to meet monthly and report to the President quarterly unless there were urgent issues arising that needed emergency attention, but no sooner had we been appointed and settled than it started falling apart.

“It was ill-fated from day one: Some members refused to join and participate such as Zimbabwe Council of Churches secretary-general Reverend Dr Kenneth Mtata, others were not committed like tycoon Kudakwashe Tagwirei who only attended a few meetings and some threatened to resign in the case of clergyman Shingi Munyeza. But Munyeza didn’t resign, he just made noises to that effect.”

After initially quietly disappearing from the body he had joined with hype and fanfare, Ncube recently confirmed that he had quit Pac where he was deputy chairperson to Mnangagwa’s nephew Edwin Manikai. The first chair was business executive Joe Mutizwa, with Manikai as deputy.

Ncube’s departure has been a public secret for months now. The NewsHawks was fully aware of it, but did not write about it as it sought to investigate the reasons behind it. His colleagues say they were informed of his resignation at least six months ago, which he did not voluntarily announce publicly.

That is why Ncube did not attend Mnangagwa, Finance minister Mthuli Ncube and Pac’s 7 December 2021 meeting with business executives at State House in Harare.

Explaining his decision, Ncube recently said: “I was generous in my spirit as a God-fearing man. I believed this man was about to do a turnaround for our country, again was I disappointed. I was actually approached and agreed to serve in the Presidential Advisory Council. I have sat at close range with the President advising him on a number of issues, but I have since retired, stepped down because I have seen this thing is not going to end well.”

He went on to lambast Mnangagwa and to admit that he was naïve to support him.

Ncube had joined Pac in January 2019 when it was launched with trumpet blast and trending media publicity. He even demanded that his AMH editors write prominent stories about it, and put them on their front pages. When some weekly newspaper editors resisted, he was not happy.

At subsequent reviews of newspaper editions that covered the Pac launch, Ncube threw petty tantrums whenever some negative feedback was communicated as he demanded editorial loyalty and a shift towards supporting Mnangagwa’s government.

That was studiously resisted by editors and triggered a fierce battle for the control of the editorial until he intervened and removed the editor-in-chief Dumisani Muleya, making political editorial changes in line with his self-serving power matrix manoeuvres and currying favour with Mnangagwa.

Sources say Ncube was often under pressure to balance interests: As the coup and Mnangagwa’s cheerleader he needed to continue singing for his supper to be at the feeding trough or high table, while also avoiding recklessly ruining his papers’ editorial credibility. He failed to maintain the precarious balance and quit.

AMH, which is technically insolvent, was and still is his key source of livelihood.

Pac comprised business executives, professionals and intellectuals, most of whom were Mnangagwa’s cheerleaders during the November 2017 military coup that brought him to power.

“It is supposed to advise on national energy development strategy which makes Zimbabwe competitive; to suggest blueprints for regulatory frameworks and institutions for a modern, market-driven, business-friendly economy; to advise on strategies for building strong and gainful global partnerships as well as maximising on Zimbabwe’s bilateral and multilateral relations and to proffer ideas of building a Sovereign Wealth Fund and to ensure that national growth and development strategies are built on environmental safeguards for future generations,” he said.

Sibanda said the advisory council was also mandated with organising interactions between the President as well as local and international businesses. It was supposed to have quarterly brainstorming or feedback meetings with the President and ad hoc meetings as and when necessary.

In terms of its composition and character, Pac was supposed to be non-partisan, proffer honest and sincere advice, declaring own interests whenever necessary.

“The Presidential Advisory Council should respect rules of confidentiality and trust and refrain from abusing proximity for unlawful and unethical ends. Members should ensure that all advisory content generated and produced by Pac are a property of His Excellency the President who assumes automatic copyright,” Sibanda said.

Pac members were to hold office for the duration of the President’s term of office.

“The President will chair Pac meetings which are also attended by his Vice-Presidents and by any other invitees, including ministers and officials,” he said.

He said government would fund operations of the advisory council with members drawing some honorarium, although the expectation is that their services are voluntary.

Its coordination was to be done by Mfaro Moyo. Mtata refused to join from day one.

Pac has all but collapsed after becoming dysfunctional due to a number of reasons, including a disjuncture between the appointer and the appointees, and vastly incongruous expectations within the Zanu PF government that has remained unreconstructed and unreformed.

Although desirable and used around the world to help presidents improve their leadership quality and make the right decisions to better serve their countries, the Pac concept in Zimbabwe was fatally flawed from the start due to incongruent expectations among its members.

“Pac practically is dead awaiting burial. The problem was not the concept, but the main reason for its existence, which was for public relations purposes, and incongruent expectations of Mnangagwa and his advisers, at least some of them, and the implementation process that never worked from start to finish,” a Pac member told The NewsHawks. “That’s why it has fallen apart.”