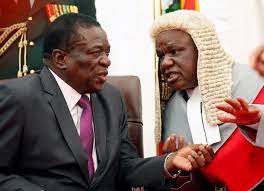 CHIEF Justice Luke Malaba this week retained his strategic position at the helm of the judiciary following a bruising battle culminating in the Constitutional Court setting aside the judgement of the High Court blocking his tenure extension by five years.

This means Malaba, who sits at the apex of the administration of the justice system in the country, will serve a controversial tenure, which was extended for and to him effectively by President Emmerson Mnangagwa through unprecedented constitutional amendments.

The move will further politicise the judiciary, and almost certainly judicialise politics, further undermining the judiciary, rule of law and democracy.

Judicialisation of politics — the reliance on courts and judicial intervention to resolve  questions — is arguably one of the most significant phenomena in Zimbabwean politics, yet under-studied and not adequately analysed.

When a military coup takes place anywhere in the world, as it did in Zimbabwe in November 2017, the pillars of state —executive, legislature and judiciary — are usually shaken to their foundations, dislocated or collapsed.

This mostly has a chilling effect on the fourth estate — the media. Typically, the executive and the legislature become the first victims, as power becomes shared between the junta and judges.

Even if they remain intact, they become pliable to the usurpers; controversial or illegitimate claimants to power.

The judiciary’s role after any coup is particularly critical. That was also the case in Zimbabwe.

Soon after President Emmerson Mnangagwa took over power on November 24 last year — three days after the late former president Robert Mugabe was pressured under house arrest at gunpoint by the army and through threats of a Gaddafi-style execution by angry mobs to resign — he did what usurpers usually do: use judges to ensure legal legitimacy.

Political legitimacy — Mnangagwa’s holy grail — is a different issue and a story for another day.

Some usurpers just amend the constitution, change the law and cashier judges to protect themselves against prosecution for treason, incarceration or execution.

In Zimbabwe it was Judge President George Chiweshe who first handled the coup issue. He ruled that Mugabe’s defenestration of his then deputy Mnangagwa prior to his return to seize power was illegal.

Malaba dismissed an application by two fringe political outfits seeking nullification of Mnangagwa’s rise to power and incumbency which they had argued was unconstitutional and illegal. Malaba said Mnangagwa’s ascendancy was legal and procedural as Mugabe’s resignation was free, voluntary and in terms of the law.

Most judges rely on the dodgy Dosso jurisprudence which can be traced to the judgement of the Pakistan Supreme Court in State v Dosso, a decision that has been termed “a carte blanche for treasonable conduct”.

Local judges almost certainly relied on this and the doctrine of necessity to justify their decisions.

There is a rich history of case law within the Commonwealth, where there have been legal challenges to the unconstitutional overthrow of elected governments.

These cases and incisive commentary on them are set out in an interesting book by Professor John Hatchard and Dr Tunde Ogowewo titled Tackling Unconstitutional Overthrow of Democracies: Emerging Trends in the Commonwealth.

Hatchard and Ogowewo develop a new theoretical construct — “the implicit bargain theory” — to explain the existing jurisprudence on coups.

Their study critically examines the evolution of judicial decisions on the subject. In doing so, it also evaluates jurisprudential theories underpinning these judgements.

The position of the Commonwealth, especially given its strong stance against unconstitutional overthrow of governments, is clearly articulated. Ironically, the Harare Commonwealth Declaration of 1991 and the subsequent Millbrook Commonwealth Action Programme on the Harare Declaration (1995), cite coups as particularly grave violations of their principles. Zimbabwe is going back to the Commonwealth after pulling out over a decade ago.

After the Harare coup, judges were on the frontline of events and debate. Hatchard and Ogowewo explain why.

“To understand the nature of the existing jurisprudence on coups, it is important to understand what in fact produced it,” Hatchard and Ogowewo write.

For this, a new theoretical construct — “the implicit bargain theory” — is introduced to tell the story.