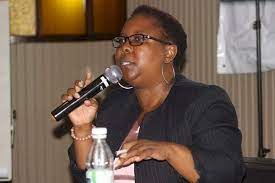 Female participation in governance is generally not being actively prioritised notwithstanding the fact that a progressive Bill on the constitutional amendment has since sailed through the National Assembly and the Senate.

According to Zimbabwe Gender Commission (ZGC) chief executive officer Virginia Muwanigwa (pictured), the country has come of age in terms of gender equality, although more still needs to be done.

“As a country we have done very well in terms of our legislative framework or in terms of ensuring that our constitution is very clear on the need for gender equality and non-discrimination. We have also done very well in terms of setting up what is referred to as the gender machinery, basically meaning that we have set up some institutions to ensure what our constitution says on gender equality and non-discrimination become a reality.  We have a Zimbabwe Gender Commission and the Anti-Domestic Violence Council, Ministry of Women’s Affairs and the Zimbabwe Microfinance Bank. There are so many other institutions that have been set up whose role is to address the gender equality issues,” Muwanigwa said.

However, the road to reform is still arduous.

“Our biggest challenge remains that in practice among the citizens of Zimbabwe gender equality still remains a thorny issue with men believing that when we talk about gender equality we want to fight men, yet basically what gender equality says is that we need a society that is inclusive. And when we have structure in the society, the structures need to be inclusive,” she said.

In terms of governance issues, women in politics are still dogged by traditional problems, with no respite in sight.

A councillor in Redcliff, Makanyara Piki, one of the two female councillors in the town, says although the government is in support of gender equality the situation on the ground is not reflective of this official posture.

“We have to applaud government for supporting gender equality issues. However, the situation on the ground remains a challenge for women in governance. The major challenge that we face as women is lack of funding or enough financial support for those with political ambitions as opposed to our male counterparts. This is notwithstanding the fact that government supports the participation of women in politics,” she said.

There is a need for mindset change, according to the country director of the Women’s International League for Peace and Freedom, Edwick Madzimure.

“On our part, we educate both the local men and women through awareness raising on the need for gender equality.  First, men must do away with the patriarchal system which reserved the place of women to the kitchen and child bearing. Secondly, on women and girls we educate them that they need to start stepping up for leadership positions and they also need to start supporting fellow women in governance,” she said.

Madzimure added that women also have a critical role to play towards the promotion of peace in governance.

“As women, the first role is participation. Let’s participate in all peace processes. For instance, the UN Security Council Resolution 1325 calls for the meaningful participation of women in peace and security. We must make our voices heard and the only way to do that is if we participate, politically and economically because the other challenge limiting women’s participation in politics is lack of financial resources, hence if there’s economic empowerment women can participate in politics hence they can speak with amplified voices,” she said.

The Midlands provincial chairperson for the Women in Local Governance Forum (WILGF), councillor Idiraishe Dongo, said the challenge is the lack of political will to create an enabling environment for women in governance, especially those in grassroots structures.

“In December 2020, we engaged the President of the Republic of Zimbabwe, ED Mnangagwa, at the Great Women Councillors Indaba, the first if its kind, in Victoria Falls, over the under-representation of women at local level both in the law makers and implementors. And I am glad to inform you that, the listening President heard our concerns and awarded us a 30% quota system at local authority. And to us women, that’s a plus and if we add the 10% we have, it may accumulate to 40% women’s representation at local level. To me the challenge is more about the political will to have women in positions of influence and implementation of the legal frameworks because the constitution of Zimbabwe provides for it,” Dongo said.

Although the road to gender reform seems long, a legal expert said the participation of women in issues of governance cannot be understated.

“Women constitute more than 50% of the population of Zimbabwe and the importance of their participation in governance and peace cannot be over-emphasised. Women in leadership influence other policymakers to view things from a gender perspective. Issues that affect women are better understood by fellow women. Although we may explain to men that a woman in her periods needs adequate water to bath, the level of understanding the magnitude of the problem will never be the same. Having women in decision making positions therefore helps amplify issues affecting women which, in turn, helps us get favourable policies and laws,” Sheila Fashu, a lawyer with the Legal Resources Foundation in Gweru, said.

The ZGC boss said women can play an important role in governance.

“By women participating equally within our governance sector, it means that we have a shared vision of what is required in our country. We will also be able to address problems specifically felt by women and will also be informed by the lived realities of not just the men and boys but women and girls. It is important that women participate in governance starting not just from party political governance but even the local governance. We have traditional situations where currently the traditional decision makers are men. In elections we have low participation as not more than 14% of women participate and there is need for an increase in that figure. The low participation of women in governance arises from the governance system, particularly party-political system which tends to have some violence and women will shy away from participating because they want to avoid becoming targeted. In addition, women don’t have resources which are required by our kind of politics. It can also be noted that our society has not prepared women to be leaders, and there are also issues of responsibilities at household level,” Muwanigwa said.