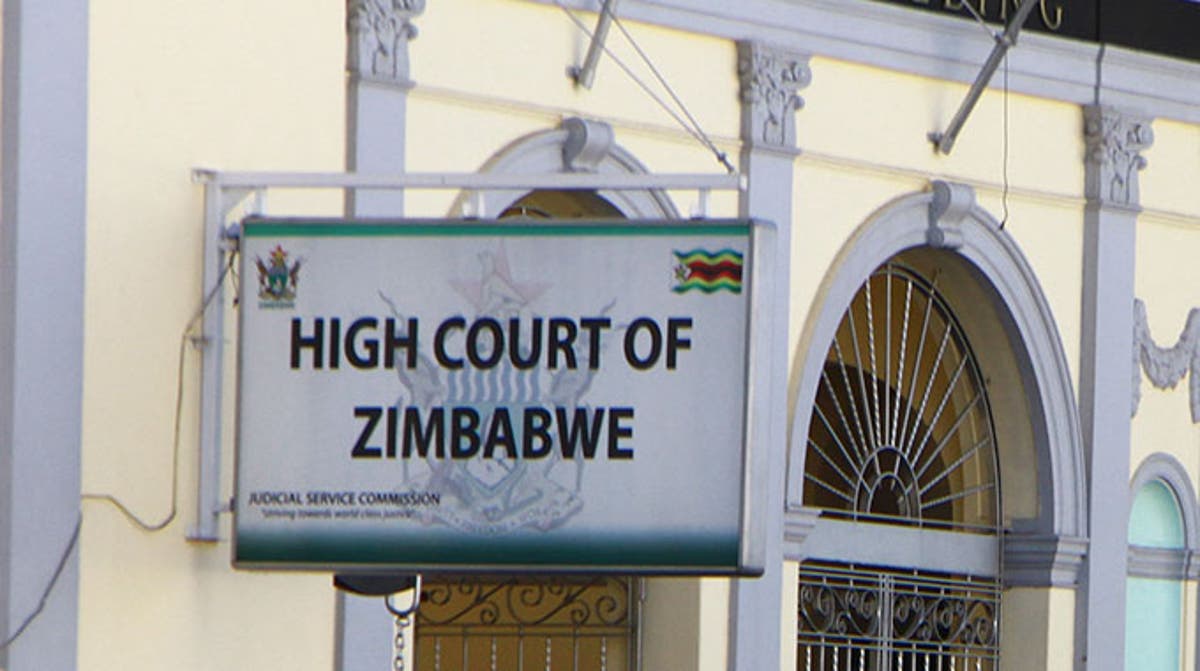 THE decision of the Judicial Service Commission (JSC) to recommend that the president appoints a tribunal in terms of the constitution to inquire into whether or not Justice Erica Ndewere should remain in office as High Court judge has opened a can of worms.

Ndewere has approached the High Court to challenge this recommendation and the decision of the president to set up the tribunal. What is alarming are the allegations that she makes under oath against chief justice Luke Malaba and judge president George Chiweshe.

If these allegations are true, both the chief justice and the Judge President face removal from office for committing some of the most heinous of judicial offences — interference with the impartiality and independence of courts and the fair trial rights of accused persons.

Ndewere alleges that the chief justice and the judge president have interfered with the administration of justice in two prominent cases, namely, the bail cases of ex-minister Prisca Mupfumira and the opposition politician Jacob Sikhala.

In her affidavit, Ndewere details the nature of the alleged interference. She alleges that the investigation is “being
weaponised as a means of attacking not just my independence as a judge, but the independence of the judiciary
as a whole.”

Mupfumira case
Ndewere claims that she was first threatened by the chief justice with a tribunal investigation in August 2019 over her alleged refusal to follow his unlawful directive to deny Mupfumira bail. Mupfumira was arrested in July 2019 and charged with corruption. She appeared in the Magistrate’s Court and was denied bail.

The appeal against the refusal of bail was made to the High Court and the matter came before Ndewere, who was the duty judge in the bail court. The appeal hearing commenced on 2 August 2019. The prosecution raised a preliminary objection based on the production of a certificate by the prosecutor-general which stated that no court had jurisdiction to hear the appeal.

The defence argued that the prosecutor-general’s certificate was inconsistent with the constitution.

Ndewere agreed with the defence. She then postponed the main bail matter to 5 August 2020 to enable the prosecution to call the investigating officer. On 5 August, the matter was argued and she reserved her bail ruling.
Upon her return to her chambers she noticed a number of missed calls from judge president Chiweshe.

She then went to his office to see him. She alleges that the judge president then informed her that he had received information that someone called Belinda had approached her and offered her a bribe on behalf of Mupfumira. She denied the allegation adding that if anyone had done that she would have caused their arrest.

Ndewere further states that on the following day, she was again called by the judge president who asked her how the Mupfumira case had gone in court and she duly explained to him.

She adds that as she chatted to the judge president it became clear to her that he had been given information, which was at variance with what had actually taken place in court. He then advised that there were people who were not in court, but who were misrepresenting what had happened in court. He undertook to tell those
people to leave her to do her work and says she left the judge president’s chambers believing that she would be
left alone to do her work.

On the afternoon of Tuesday 13 August 2019, the judge president once again rang her as she was in the middle of writing the Mupfumira bail judgment. When she asked if all was well, she alleges that he said he could not tell her anything over the phone and directed that she see him in his chambers at 10.00hrs the following day.

That this was coming from the chief justice through my direct boss particularly perturbed me as these are the two people I expected to guard judicial officer’s independence jealously.”

Ndewere subsequently denied Mupfumira bail, a decision she said was based on the merits and evidence of the case. She, however, alleges that it became clear to her that the chief justice was unhappy with her decision “on the prosecutor-general’s certificate as Professor (Lovemore) Madhuku was later invited to lecture judges at their symposium on the validity of the certificate until it is set aside by the Constitutional Court.”

The Criminal Review Case
Ndewere believed that the trauma she had been caused by the Mupfumira case was over until in March 2020, when she received a query from the chief justice over a criminal case review she had done in October 2019. She states that this raised a lot of questions as this in the normal course would not involve the chief justice.

After investigating the issue and taking advice, she decided to apologise as she believed there had been no prejudice and the accused had finished serving his sentence. She says she was then surprised when the chief justice pursued the matter and told the Judge President to advise her that he would be taking her to the tribunal.

This, she says, surprised her at many levels as her understanding was that she could only be taken to the tribunal after all due legal processes, including an investigation in terms of the Judicial code of conduct by the three judge panel whose report would thereafter be considered by the JSC. She says that she asked the judge president why the chief justice had singled her out for this type of treatment, particularly before she had given the full explanation of the review. She gave her explanation in June 2020 and thought that this was the end of the matter as she had
heard nothing further from him until 15 September 2020.

On that day she received a letter stating that the “complaints have been placed before the Judicial Services Commission in terms of section 187 (3) of the Constitution of Zimbabwe.” She learnt that the chief justice had referred the matter to the JSC for consideration of whether it should be referred to the president for establishment of a tribunal, without following the investigative procedures provided for in the Judicial Code of Conduct.

The Sikhala Case
Ndewere alleges that 15 September 2020 is significant in that this was the day after she had reserved her judgment in the bail appeal by Sikhala. She believes that there can be no doubt that the JSC letter was designed to put pressure on her as she prepared her judgment. She further states that the chief justice was the complainant to the JSC which he chairs.

She adds: “Given the threats made against me when I handled the bail application of Prisca Mupfumira, I have reason to believe that the timing of the service of the complainants was calculated to intimidate me into abandoning my independence as a judge and to deny Mr Sikhala bail regardless of the merits of his case.

However, I refused to be intimidated and I considered the bail appeal on the merits and, after determining that it was a meritorious case, I granted Mr Sikhala bail.” Ndewere alleges that given the background to the matter the complaints against her “are tainted with malice and intention to victimise me for refusing to obey the 2nd Respondent’s (chief justice) unlawful order and for standing up to his attempts to undermine my independence as
a judge and the independence of the judiciary as a whole.”

Chief justice and judge president responses
The Chief Justice and the Judge President are both cited in the urgent application. They both deposed to affidavits in response to the allegations.

The chief justice replies: “I have never given instruction to any Judge including the applicant (Ndewere) on how to deal with or decide any matter including the Mupfumira matter.”

In a separate paragraph he further states in general terms: “I deny the allegations made against me, in toto, including the allegations of “malice” or “bias” or “undue influence” set out principally in paragraph 14 of the
Applicant’s Founding Affidavit…as if each and every allegation contrary to the statements made herein had been
traversed seriatim.”

In lay person’s terms, the chief justice makes a general denial covering each and every allegation of misconduct on his part.

Another amazing fact is that the judge president’s response is an exact copy and paste of the chief justice’s response. As articulated above, specific serious allegations have been made against the two senior judicial
officers.

Ndewere has referred to missed calls, telephone calls, trips to the judge president’s office when summoned by him, and the content of the discussions in which he allegedly told her what the chief justice had said. Ndewere details them and includes the dates and times. It is not enough for the Judge President to offer a blanket denial which is barren of counter facts.

As for the chief justice, first, it is remiss of him as the head of the judiciary to permit the filing of identical affidavits in response to serious allegations of judicial misconduct.

This is a serious undertaking and guides the performance of judicial work. The constitution states categorically that the judicial authority derives from the people of Zimbabwe.

Judicial power is exercised not for the benefit of judges but for the people. This is precisely why judicial independence and impartiality are demanded and enforced by the constitution. The constitution affirms that the courts are independent and are subject only to the constitution and the law, which they must apply impartially, expeditiously and without fear, favour or prejudice. It underlines that the independence, impartiality and effectiveness of the courts are central to the rule of law and democratic governance and therefore — “neither the state nor any institution or agency of the government at any level, and no other person, may interfere with the
functioning of the courts.”

The constitution requires members of the judiciary to be guided by, among others, the principle that justice must be done to all, irrespective of status and that the role of the courts is paramount in safeguarding human rights and freedoms and the rule of law.

Members of the judiciary are required individually and collectively to respect and honour their judicial office as a public trust and must strive to enhance their independence in order to maintain public confidence in the judicial system. When making a decision, a member of the judiciary is required to make it freely and without interference or undue influence.

For its part, the JSC is required by the constitution to, among other things, promote and facilitate the independence and accountability of the judiciary and the efficient, effective and transparent administration of justice in Zimbabwe and has all the powers needed for this purpose. It is required to conduct its business in a just, fair and transparent manner.

The constitution further promises every person the right to a fair hearing before an independent and impartial court. This right is so fundamental that it cannot be suspended even during a state of emergency.

This seriously impairs the public confidence in the courts if not properly addressed. It is important that these allegations be fully investigated and dealt with decisively as required by the constitution. The allegations cannot simply be wished away through identical affidavits.

The country deserves to know the whole truth — whatever the merits of Ndewere’s own charges.

The author is a UK based Zimbabwean lawyer and writes in his own capacity.

More children in Zimbabwe are working to survive: what’s needed