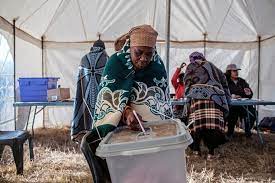 LESOTHO is due to hold national elections in mid-October. The polls were expected to be held under a new constitutional regime resulting from a reform process that started in 2012. But, the process has not yielded much fruit.

There is widespread consensus – locally and internationally – that the constitutional kingdom of about 2.2 million must reform its political system to overcome recurrent political instability. But successive governments have failed to bring about the necessary changes.

Now, with parliament legally required to dissolve by 14 July 2022 and elections held within three months, there is simply no time to undertake and complete the reforms. So, Basotho look set to vote without the much-needed political changes, at least the important ones.

The proposed reforms that have not been passed by parliament pertain to the excessive powers of the prime minister, unprofessional media, politicised security agencies and judiciary, parliament and the formation of government.

The biggest deficiency of Lesotho’s political system is that the prime minister wields excessive powers.

These deficiencies became apparent with the advent of fragile coalition politics in 2012. In 2014 to 2015, the then prime minister, Thomas Thabane, capriciously replaced the chief justice, the president of the court of appeal as well as the leadership of the security agencies.

He also prorogued parliament and changed most of the senior personnel of the civil service. Consequently, calls for reform grew louder while disagreements in the then tripartite coalition became pronounced.

The then deputy prime minister, Mothejoa Metsing’s party, Lesotho Congress for Democracy, withdrew its support for Thabane’s government. The government, which was formed through a hairbreadth majority in parliament – collapsed in 2015.

A new government was elected, led by Prime Minister Pakalitha Mosisili in 2015. It made the reforms its main agenda. But it didn’t have a clear process for executing the reform programme. Instead, it was consumed by the assassination of the then commander of the Lesotho Defence Force, Maaparankoe Mahao, in June 2015 by rogue army operatives.

The country was thrown into instability, culminating in the Southern African Development Community establishing a commission of inquiry in July 2015 to investigate the death and related matters. A key recommendation of the commission was that the country undertake a comprehensive constitutional reform programme.

Mosisili’s government made reforms one of its key objectives. But the government failed to make any meaningful progress until it collapsed in 2017.

A new government was elected in 2017, led by Prime Minister Thabane for the second time. There was renewed vigour to execute the reforms programme. The government proposed the National Reform Commission Bill of 2018 to parliament to establish an executive-based commission to implement the reforms.

The bill never became law as it was greatly criticised by civil society and other stakeholders because government had designed the process unilaterally. A much more consultative approach was taken in 2018 when the first muti-stakeholder dialogue was organised. This resulted in the enactment of the National Reforms Dialogue Act.

The act established the National Reforms Authority (NRA). The NRA was responsible for implementing the broad and often vague decisions of the Multi-Stakeholder National Dialogue.

The process suffered a setback in 2020 after Prime Minister Thabane resigned, following allegations that he was implicated in the murder of his ex-wife, Lipolelo Thabane. A new prime minister, Moeketsi Majoro, was sworn in. The reform programme continued under the stewardship of the National Reforms Authority.

The so-called Omnibus Bill that is now before parliament is not perfect. But it promises to arrest some of the longstanding constitutional problems. These include the excessive powers of the prime minister, a judiciary that is controlled by the executive, politicised security agencies and a weak parliament.

Despite the hype about passing the Omnibus Bill before the election, it is almost certain that parliament will not have passed all the changes by its dissolution in mid-July. It is, therefore, expected that the country will hold election under the old political design.

The main hurdle is that the majority of critical provisions in the bill seek to amend the entrenched provisions of the constitution.

These include changes on the judiciary, parliament and security. These provisions need a two-thirds majority in both houses of parliament – Senate and the National Assembly. Some changes even require a referendum.

Given the improbability of especially the entrenched provisions being amended before parliament is dissolved, what then?

An option is to cherry-pick and pass the amendments that need a simple majority vote. But, that may not make any meaningful impact. Most of the problematic provisions of the constitution are entrenched.

The only viable option, albeit regrettable, is that parliament must avoid tampering with the Omnibus Bill, and wait for the new parliament after the elections to resuscitate the entire reform programme.

Why reforms always fail in Lesotho

This latest false start on reforms indicates that Lesotho is struggling to implement much-needed constitutional changes. The country has had five governments in 10 years. Every time a government collapses, the reform programme follows suit.

The fact that the Omnibus Bill is now held up in parliament is emblematic of a lack of clear process. There was no plan about how different changes, including changes to the entrenched provisions of the constitution, would be undertaken.

Where to from here?

Now that the National Reforms Authority has been disbanded, and parliament has failed to pass the Omnibus Bill, it means the next election will be held under the old legal framework. Then after elections, yet another government will be expected to reinvigorate the reforms.

When the new programme starts after election, the country must pay particular attention to the process as previous attempts at reform were undermined by, among other factors, a poor process.

About the writer: Hoolo ‘Nyane is the head of the Public and Environmental Law Department at the University of Limpopo in South Africa.–The Conversation.

Related Topics:Lesotho elections
Up Next

African Union @20: some reason to cheer, but lots of work ahead