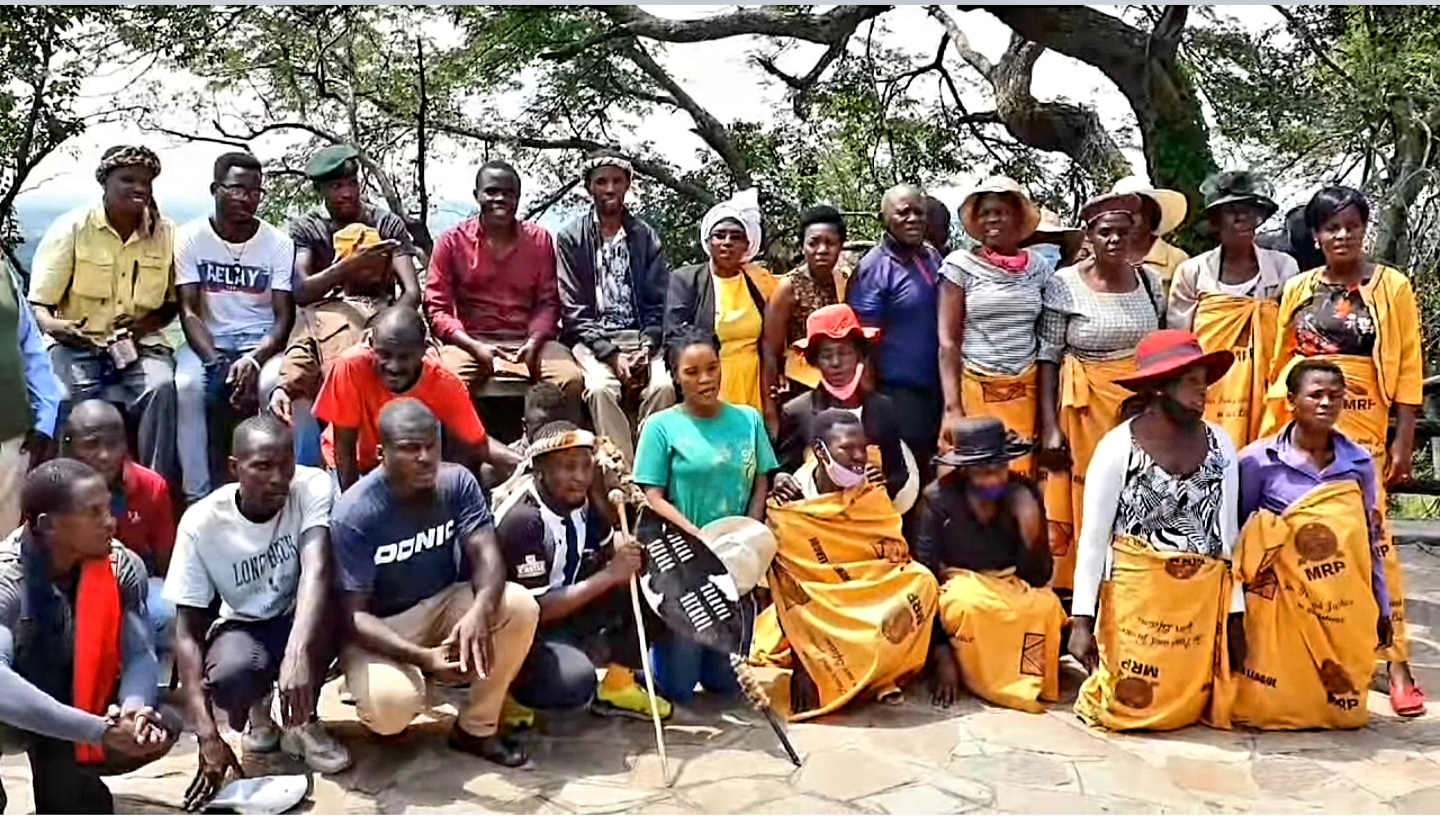 TWENTY years on, the legacy of the late former president Robert Mugabe’s chaotic and oft-violent land reform programme is still with Zimbabwe and its communities – people continue fighting over who occupies which piece of property and on what basis.

LIZWE SEBATA
Lot 15 Tabas Induna Farm in Ntabazinduna – where historical and contemporary interests and grievances explosively intersect  – 40 kilometres northeast of Bulawayo along the Harare highway is the current centre of pitched battles pitting former farm owner Brian Davies and one of the new occupants Floyd Ambrose who says he was given part of the farm in 2004.

Davies, a white farmer, previously occupied the whole farm, but Ambrose, who claims he hails from Stanmore in Gwanda, became part of the new settlers. Ambrose’s claim of being from Stanmore is questionable going by his national ID number 19-020355Y-00.

The applicant should be 16 years of age or above in terms of the National Registration Act Chapter 10:17.

The ID is an 11-character alphanumeric code in which the two-digit prefix denotes the district in which the applicant resides or registered for the national document and the last two digits show where one originates from – the district code.

So in Ambrose’s case 19 means he took his ID from Umzingwane, but the 00 digits mean that he is “alien” or a foreigner.

However, even those people whose families have lived in Zimbabwe for generations after migrating from other countries still sometimes hold cards indicating they were non-citizens – 00.

So Ambrose might be in that category, especially as someone of mixed race or a coloured. Some whites and coloureds, as well as African/black immigrants or their descendants have 00 as the last digits on their IDs.

Davies’ ID was not available for similar examination, although he has not been making similar nativist entitlement claims as Ambrose who speaks fluent Ndebele.

While people have been making claims Ambrose is married to former vice-president Kembo Mohadi’s daughter, he has denied this and actually said it is his brother.

Checks on this established that Ambrose is actually telling the truth. His brother Malcolm is the one married to Mohadi’s daughter Abigail.

They married in August 2014 in a flamboyant wedding attended by top government and Zanu PF officials.

That is why Ntabazinduna communities have previously complained that Mohadi had helped Floyd Ambrose to take over Chief’s Lodge where he had been staying before he went back to rent a house in Bulawayo.

Davies is also now staying in town, although his property is still at the lodge. Ambrose is also back at the lodge.

Davies’ farm was gazetted and divided into 15 plots, while he kept the remainder of the property – effectively Lot 16 – which is 75 hectares. Ambrose got 21 hectares at the farm where Chief’s Lodge is situated.

The lodge is now at the heart of the controversy and fight between the two. It is not clear who actually built the lodge as Ambrose claims both of them found it there.

Ambrose says he once worked for a month or so around 1996 for Davies.

Ntabazinduna communities and activists say Ambrose is occupying an area where Ndebele cultural activities were performed around the sacred mountain. Ntabazinduna holds historical and cultural significance in Ndebele society; it is the mountain where King Mzilikazi – founder of the Ndebele State, Mthwakazi  – and his izindunas (chiefs) settled the issue of his new reign of the new territory and the issue of his son Nkulumane who had been installed king while he migrated from South Africa to Zimbabwe via Botswana and Zambia.

The other migrating party had arrived in Zimbabwe from South Africa across the Limpopo River first with Nkulumane and Gundwane Ndiweni.

When Mzilikazi did not arrive for two inxwala cultural events (tasting of first fruits of a bountiful season ceremony, usually in December/January characterised by song, dance, feasting and rituals), Nkulumane was installed king.

But when Mzilikazi finally came, he crushed the new ruling clique which included Nkulumane and some chiefs, to regain the reins of power.

When the land redistribution exercise started in 2000, Ambrose in 2004 moved into Lot 15 which he was then allocated in 2008. He says he later got the papers, including an offer letter in 2010, to legally occupy the land.

Then the two entered into a land swap deal in 2015 which has now sparked a fierce battle for the control of the property in Umguza district, Matabeleland North province.

Ambrose moved to Davies’ farmhouse and Davies into the lodge where he is now refusing to vacate even if the swap deal fell apart.

The matter is now pending at the Supreme Court after Ambrose filed an appeal against a 4 March 2021 High Court judgement issued by Justice Nokuthula Moyo directing that he vacates the land under dispute.

“The 1st respondents and all persons claiming through and under him shall remove or cause the removal of themselves and all such persons occupying a certain piece of land being Lot 15 Tabas Induna farm, Umguza, within 24 hours of the service of this order,” Moyo ruled in favour of Davies.

However, Ambrose quickly appealed against the “whole judgement” at the Supreme Court the following day 5 March.

Ambrose claims the activists, armed with axes and spears tracked him down for five kilometres out of the disputed land until he fired warnings shots in the air to scare them away.

Davies’ properties had been removed from the lodge as Ambrose moved in and threw out his former boss’s belongings.

MRP activists removed Ambrose’s property and put back Davies’ before Ambrose came back to throw out Davies’ items and occupied the lodge again the following day.

Before the signing of the swap deal, Davies was in charge of his 75ha known as the remainder of Tabas Induna, a stone’s throw away from the Chief’s Lodge situated in Lot 15 where Ambrose resided.

“This letter serves to confirm that Ambrose Floyd ID Number: 19-020355 Y-00 was recommended Plot Number 15, Tabas Induna which also includes the Chiefs Lodge in Umguza district, Matabeleland North province. The farm has an extent of 21 hectares,” reads in part a memo by one R Graham, the Provincial Land Officer – Estate Management on behalf of the Matabeleland North Chief Lands Officer dated 29 April 2008.

“The Ministry of Lands, Land Reform and Resettlement is currently processing an offer letter for his plot. May you kindly render him any assistance he requires in terms of financial and other agricultural inputs and implements to enable him to carry out his farming operations.”

On 16 July 2010, then Lands Minister Herbert Murerwa put a seal to the offer letter that had been given to Ambrose.

“The Minister of Lands and Rural Resettlement has the pleasure in informing you that your application for land under Model A2 scheme has been successful. This offer is made in terms of the Agricultural Land resettlement Act (Chapter 20:01)…” Murerwa wrote.

On 9 July 2015, Ambrose and Davies entered into a Memorandum of Understanding (Mou) to swap their pieces of land, but subject to approval from the Ministry of Lands and Agriculture. The Mou is now the source of a bitter fallout and fight between the two.

“Davies has agreed that Ambrose and family have his full permission to reside and work at the 21 hectare area demarcated as shown on the map within the area known as remainder of Tabas Induna in Umguza district of Matabeleland North province. Davies will have no interest or objection in any project on this piece of land. This hereby gives Ambrose authority to operate on the piece of land as per his discretion,” the Mou reads in part.

“Ambrose has agreed that Davies and family have his full permission to reside and work at the area demarcated as shown in the map as Lot 15 of Tabas Induna in Umguza district of Matabeleland North province. Ambrose will have no interest or objection in any project on this piece of land. This hereby gives Davies the authority to operate on the piece of land as per his discretion.

“Ambrose and Davies to formalise their occupancy through the Ministry of Lands and Rural resettlement to ensure their occupation of the said areas is in compliance with the Provisions of the Agricultural Land Resettlement Act.”

However, the Lands Ministry did not approve the land swap, resulting in a termination of the agreement and a fallout between the two as Davies refused to vacate the lodge and the matter spilled to the court. In an urgent High chamber application filed on 23 February, Davies argued he should remain on the contested land by virtue of the MoU.

“In the founding affidavit, it is contended that this is an urgent application for the eviction of the 1st respondent and all those claiming occupation under him or through him from a portion of a farm known as Lot 15 Tabas Induna… Since July 2015, following a cession agreement with the 1st respondent, I have enjoyed peaceful and undisturbed possession of portion of the farm known as Lot 15 Tabs Induna,” the court papers say.

“Accordingly, the 1st respondent (Ambrose) has no lawful right to evict me from Lot 15 Tabas Induna farm…”

Davies refused to comment on the matter before referring the reporter to his lawyer Josphat Tshuma who also declined to comment, saying the matter was before the courts.

Ambrose denied claims that he acquired the said property through political links.

“It is not a criminal offence to be related to a politician neither is it criminal to belong to any political party of one’s choice as the constitution clearly states that. So being related to the former VP or being a Zanu PF member must not be criminalised,” Ambrose said.

“Rather, it is Davies who is using politics to fight a legal battle by roping in the MRP to fight in his corner. Last time, he politicised the matter after inviting former Chief (Felix Nhlanhlayamangwe Ndiweni). However, on this issue they keep referring to the courts that I am not following court orders.
“Of late, Davies has lodged two chamber applications; the first one the judgement came on 23 February and that case was struck off the roll. That judgement was in my favour. He then lodged another chamber application and the judgement came out on 4 March in his favour and I automatically appealed that judgement through the Supreme Court.”

The battle over Tabas Induna Farm is a microcosm of a wider national problem; a legacy of the controversial and contentious land reform programme whose disputes and ramifications will last longer and deeper into the future – showing whenever property relations fundamentally change there is serious conflict and loud reverberations.

Marry Chiwenga cries out for justice