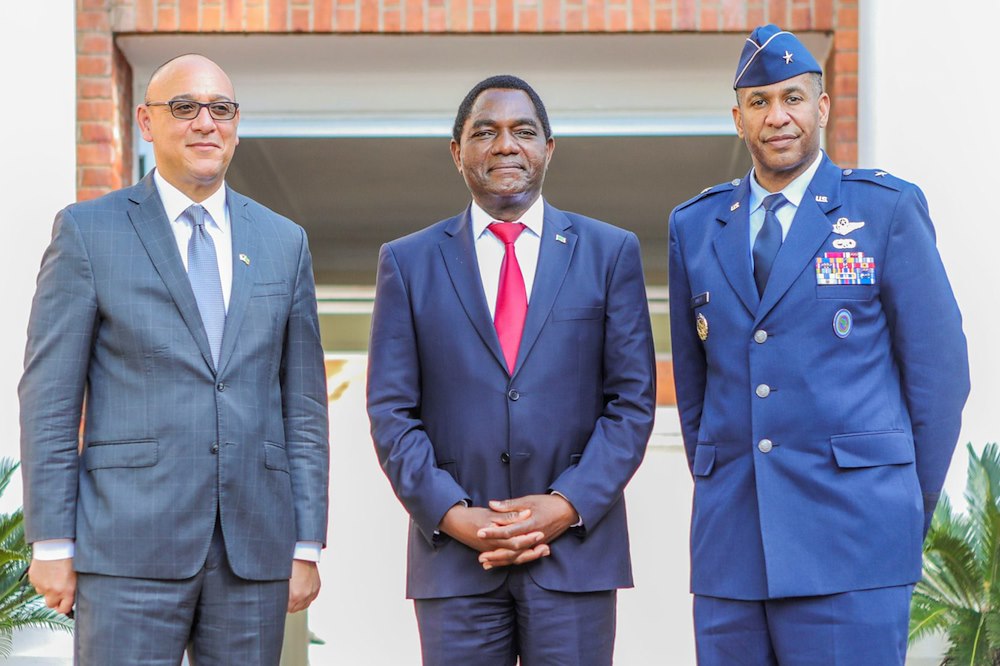 ON 26 April, the United States Africa Command (Africom) announced that it had set up an office in the US Embassy in Lusaka, Zambia.

According to Africom Brigadier-General Peter Bailey, deputy director for strategy, engagement and programmes, the Office of Security Cooperation would be based in the US embassy building.

Social media in Zambia buzzed with rumours about the creation of a US military base in the country. Defence minister Ambrose Lufuma released a statement to say that “Zambia has no intention whatsoever of establishing or hosting any military bases on Zambian soil”.

“Over our dead bodies” will the United States have a military base in Zambia, said Fred M’membe, the president of the Socialist Party of Zambia.

Africom’s Bailey of Africom had met Zambia’s President Hakainde Hichilema during his visit to Lusaka. Hichilema’s government faces serious economic challenges despite the fact that Zambia has one of the richest resources of raw materials in the world.

When Zambia’s total public debt grew to nearly US$27 billion (with an external debt of approximately US$14.5bn), it returned to the International Monetary Fund in December 2021 for financial assistance, resulting in an IMF-induced spiral of debt.

Two months after Hichilema met the Africom team, he hosted IMF deputy managing director Antoinette M Sayeh in June, who thanked Hichilema for his commitment to the IMF “reform plans.”

These plans include a general austerity package that will not only cause the Zambian population to be in the grip of poverty but will also prevent the Zambian government from exercising its sovereignty.

M’membe has emerged as a major voice against the US military presence in his country. Defence minister Lufuma’s claim that the US is not building a base in Zambia elicits a chuckle from M’membe. “I think there is an element of ignorance on his part,” M’membe told me. “This is sheer naivety. He [Lufuma] does not understand that practically there is no difference between a US military base and an Africom office. It’s just a matter of semantics to conceal their real intentions.”

The real intentions, M’membe told me, are for the US to use Zambia’s location “to monitor, to control and to quickly reach the other countries in the region.”

Zambia and its neighbour, the Democratic Republic of the Congo, he said, “possess not less than 70% of the world’s cobalt reserves. There are huge copper reserves and other minerals needed for modern technologies [in both these countries].”

Partly, M’membe said, “this is what has heightened interest in Zambia.”

Zambia is operating as a “puppet regime,” M’membe said, a government that is de jure independent but de facto “completely dependent on an outside power and subject to its orders,” M’membe added, while referring to US interference in the functioning of the Zambian government.

Despite his campaign promises in 2021, Hichilema has followed the same IMF-dependent policies as his unpopular predecessor Edgar Lungu. However, in terms of a US base, even Lungu had resisted the US pressure to allow this kind of office to be established on Zambian soil.

After news broke out about the establishment of the office, former Zambian permanent representative to the African Union, Emmanuel Mwamba, rushed to see Hichilema and caution him not to make the deal.

Is this a base or an office?

Lufuma argues that the “office” set up in Lusaka is to assist the Zambian forces in the United Nations Multidimensional Stabilisation Mission in the Central African Republic (Minusca).

Since 2014, the US has provided around 136 million kwacha (US$8 million) to assist the Zambian military.

Lufuma said that this office will merely continue that work. In fact, Zambia is not even one of the top five troop-contributing countries to Minusca (these are  Bangladesh, Cameroon, Egypt, Pakistan and Rwanda). Lufuma’s reason, therefore, seems like a fig leaf.

Neither Zambia nor the US military has made public the agreement signed in April. The failure to release the text has led to a great deal of speculation, which is natural.

Meanwhile, in Ghana, where a defence cooperation agreement was signed between the two countries in May 2018, the United States had initially said that it was merely creating a warehouse and an office for its military, which then turned out to mean that the US military was taking charge of one of the three airport terminals at Accra airport and has since used it as its base of operations in West Africa.

“From the experience of Ghana, we know what it is,” M’membe told me, while speaking about the American plan to make an office in the US Embassy in Zambia. “It is not [very] different from a base. It will slowly but surely grow into a full-scale base.”

From the first whiff that the US might create an Africom base on the continent, opposition grew swiftly. It was led by former South African president Thabo Mbeki and his defence minister at that time, Mosiuoa Lekota, both of whom lobbied the African Union and the Southern African Development Community to reject any US base on the continent.

Over the past five years, however, the appetite for full-scale rejection of bases has withered despite an African Union resolution against allowing the establishment of such bases in 2016. The US military has 29 known military bases in 15 African countries.

Not only have these 15 African countries ignored their own regional body’s advice when it comes to allowing foreign countries to establish military bases there, but the African Union has itself allowed the US to create a military attaché’s office inside the AU building in Addis Ababa.

About the writer: Vijay Prashad is an Indian Marxist historian.–Mail & Guardian

Related Topics:diplomacyunited states
Up Next

A resurgence of decolonisation: We need to do African studies with Africans