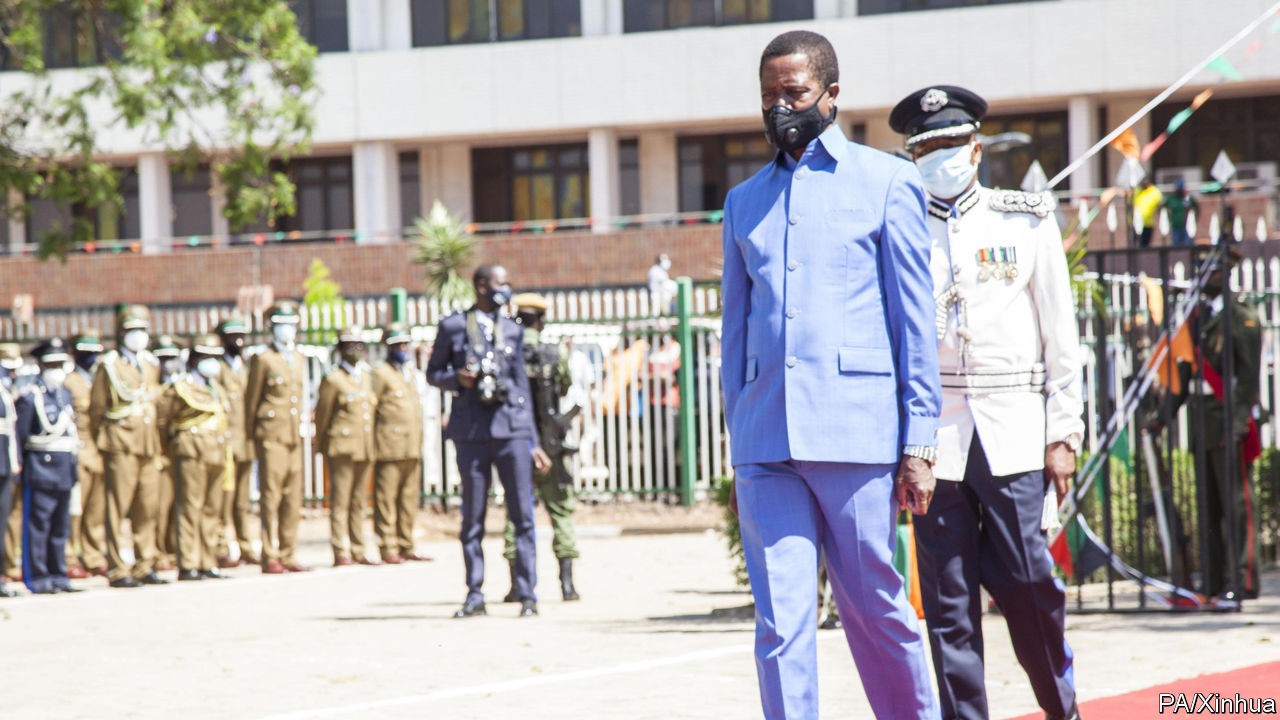 A DECADE ago, as the rich world was struggling with the aftermath of the global financial crisis, much of Africa was surfing a wave of optimism. At the front was Zambia, which in the early 1990s was among the first African countries to ditch one-party rule and socialism.

In 2012, after a decade of stunning economic growth, it joined the small club of African countries borrowing on international bond markets. Demand for its debt was so strong that it was able to borrow more cheaply than Spain.

Now Zambia finds itself at the front of another, less admirable pack. On 13 November it was poised to become the first African country to default since the International Monetary Fund (IMF)’s “heavily indebted poor countries” scheme in 2005 wiped clean the debts of 30 of the continent’s poorest countries.

Zambia is not the only indebted African state that is struggling. Because of Covid-19, sub-Saharan Africa’s economy is expected to shrink by 3% this year, equivalent to 5.3% per person. The IMF reckons that six African countries are struggling to pay back loans and another 11 are thought to be at “high risk of debt distress”. 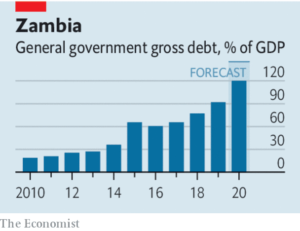 However, Zambia’s economic problems owe more to the disastrous presidency of Edgar Lungu than to the pandemic. When he took office in 2015 after the death of his predecessor, public debt stood at 32% of GDP. After five years of profligacy and theft by the ruling elite, debt has ballooned to 120%. Economic growth has tumbled—to 1.4% in 2019 owing in no small part to his government’s habit of scaring off investors by seizing mines and detaining mining bosses. A central-bank governor who resisted Lungu’s hints that he print more money was fired in August.

Lungu may be economically incompetent, but he is politically shrewd. Before a presidential election in 2016, his regime arrested opposition leaders and shut down the main independent newspaper. He won by the slenderest of margins; eked out by last-minute ballot-stuffing, according to the opposition. When it asked the constitutional court for a recount, the judges (many appointed by Lungu) set a date for a hearing two weeks later. In the hearing they threw out the case, citing a constitutional provision that election petitions must be heard within 14 days.

Lungu is taking few chances ahead of the next presidential poll in August 2021, which he would probably lose if it were free and fair. He has arrested and harassed Hakainde Hichilema, the main opposition leader, as well as journalists, musicians and other critics. The electoral commission is scrapping its voters’ roll and requiring all voters to register again in just 30 days. And if it turns out to be harder to register during the rainy season in the opposition’s rural strongholds than the ruling party’s urban ones, tough luck.

Many Zambians worry that their country is sliding into autocracy and economic ruin, like next-door Zimbabwe. To stop that slide, the region and the wider world need to start paying attention now, rather than just sending election observers a few weeks before the poll.

South Africa, which has the most clout, needs to speak up. So does Sadc, the regional bloc. And Zambia’s creditors should insist on cleaner and more democratic governance before agreeing to a bail-out. They wield a big stick. Zambia’s massive fiscal deficit of 12% of GDP means that it has to win their agreement if it is to keep borrowing in order to pay the salaries of soldiers, teachers and policemen.

Lenders—a disparate group that includes both Chinese construction firms and private bondholders—may object that it is not their job to safeguard democracy. Their main interest, quite reasonably, is to be repaid; or, in the case of the IMF, to help Zambia’s public finances get back on a sound footing. They do not want to be involved in politics. Yet Zambia’s economic crisis is caused mainly by its authoritarian and dysfunctional politics, not the pandemic or the slump in commodity prices. Its debt problem cannot be fixed without facing up to its political problem. Zambia’s next government will have to raise taxes and restrain spending to balance its books and repay creditors any more than a token amount. Only a government which Zambians see as legitimate can do this without sparking unrest.—Economist.