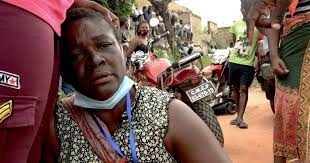 MOZAMBIQUE’S gas-rich northern Cabo Delgado province has suffered violent extremism perpetrated by the Ahlu-Sunna Wa-Jama’a (ASWJ) armed group since 2017. There are several drivers of this violence—in particular, high unemployment, poverty, and exclusion. In some cases, local communities have been uprooted from their land and lost their

livelihoods to make way for the gas industry and export-oriented agriculture.

The drivers do not exist in a vacuum and are steeped in a set of underlying conditions — including lagging structural reforms— all of which help to create the conditions needed for socio-economic grievances to fester, presenting ASWJ fertile ground for recruitment. This has led to an enormous humanitarian crisis.

ASWJ has committed killings, beheadings, mutilation, torture, and mass abductions, among other atrocities, with the insurgency causing over 3 000 deaths and displacing more than 740 000 people since 2017.

On 15 July 2021, the Southern African Development Community (Sadc) deployed its mission in Mozambique (Samim) to support efforts to combat terrorism and violent extremism, in part to prevent the risk of regional contagion.

A January 2022 Sadc Extraordinary Summit of heads of state and government reviewed the mission, and commended the progress made since its deployment —including restoring security to some districts of Cabo Delgado, which has allowed some 15 000 internally displaced people to return home.

However, the security situation in the province remains volatile and many hostages and ASWJ combatants are unaccounted for.

Considering Cabo Delgado’s complex and unstable conflict environment, one aspect that needs to be addressed is the Disarmament, Demobilisation, Rehabilitation, and Reintegration (DDRR) of those ASWJ combatants

that choose to return to civilian life.  Disarmament and demobilisation could contribute to security and stability by removing weapons from the hands of ASWJ combatants and detaching combatants from paramilitary structures. Rehabilitation (including disengagement and deradicalisation) and reintegration should ideally result in the rehabilitated former ASWJ members or associates returning to normal civilian life.

This article aims to advise local and regional policymakers on a potential DDRR programme in Cabo Delgado. Thus far, the government of Mozambique and its regional partners have focused their efforts on offensive operations, with PVE/CT resources dedicated primarily to the Sadc and Rwandan missions. Although the situation remains highly volatile, such a program could be introduced to either help to stabilise the province or to shore up any stabilisation gains in the future.

The complexity of the Cabo Delgado context will require an adaptive approach to DDRR. Cedric de Coning has defined the adaptive peacebuilding concept as “a process where peacebuilders, together with the communities and people affected by the conflict, actively engage in a structured process to sustain peace and resolve conflicts by employing an iterative process of learning and adaptation.”

An adaptive peacebuilding approach to the DDRR of former ASWJ members would engage all stakeholders in a whole-of-society consultative process to collaboratively develop a common understanding of the structural drivers of violent extremism, and to develop and adapt home-grown DDRR programmes together.

The participation of women and youth in adaptive DDRR of ASWJ members can contribute to efforts to address the socioeconomic exclusion driving tensions and violent extremism in the province. It would develop local capacities for sustainable peace by empowering women and youth to play a leading role in peacebuilding.

It would also help to ensure that DDRR programmes are not only context-specific but also gender- and age-responsive to differential needs, experiences, and statuses of individual women, men, and juveniles.

Significantly, Mozambique is already the site of ongoing Disarmament, Demobilisation, and Reintegration (DDR) of Mozambican National Resistance (Renamo) combatants as part of the 2019 Maputo Accord for Peace and Reconciliation between the government and Renamo, which provides for the complete DDR of Renamo’s armed wing as part of efforts to sustain peace in the country.

A Military Affairs Commission (MAC) composed of government and Renamo representatives manages the process, with a concomitant Memorandum of Understanding on Military Affairs. Renamo submitted a list of 5,221 combatants, of whom an estimated seven percent were women, to the MAC. As of October 2021, just over half of the identified former Renamo fighters had been demobilised. Some of the ex-fighters were integrated into senior levels of the national security forces. The outstanding combatants remained at a DDR camp in central Mozambique.

The ongoing collective Renamo DDR effort is distinct from adaptive DDRR, which requires the rehabilitative disengagement and deradicalisation of individuals who have fallen prey to radical ideologies. DDRR thus better caters to the challenges posed by highly ideological 21st-century insurgencies, particularly those connected to al-Qaeda or the Islamic State.

DDRR is also meant to be implemented in more complex environments, where a multitude of actors are engaged, and a peace deal is non-existent and perhaps unfeasible. This burdens would-be DDRR and countering violent extremism and counterterrorism (PVE/CT) practitioners with legal and operational challenges, including when, how, and with whom to engage.

Without a peace process where all or most of the combatants have at least rhetorically agreed to demobilise, DDRR instead aims to whittle away at these groups and their potential recruits by deradicalising individuals and reintegrating them into society. The intricacy of the Cabo Delgado context thus presents an opportunity to use the adaptive approach of DDRR, creating more inclusive, people-oriented PVE/CT programming at the community level.

Despite their differences, six crucial lessons learned from the Renamo process can serve as instructive inputs for future PVE/CT-related DDRR of ASWJ combatants.

First, DDR benefits from a multi-stakeholder institutional framework, that helps build national ownership and increases self-sustainability—though some analysts have been critical of the initially dominant role of the Swiss-led peace process support.

Given Cabo Delgado’s dynamic, complex, and unpredictable violent extremist environment, strong local ownership would be a critical cornerstone of potential DDRR. Significantly, the adaptive peacebuilding approach does not privilege externally imposed international programs over endogenous processes, which creates meaningful opportunities for all stakeholders, and especially for local societies and communities, to co-own and co-manage the process.

International partners’ structured engagement with Mozambican DDRR stakeholders in iterative processes of learning and adaptation could help strike a balance between external support and local self-organisation.

Second, Renamo’s DDR narrowly focused on the combatants in line with the military provisions of the Maputo Accord and did not consider the needs and capacities of their dependents. Nor did it consider the families and communities that were affected by the armed

conflict, and who were expected to absorb the bulk of ex-Renamo fighters. Significantly, a whole-of-society approach to DDRR in Cabo Delgado could learn from these shortcomings and proactively engage the affected individuals, families, and communities in a process aimed at preventing recidivism, mitigating further radicalisation, and strengthening overall community resilience to violent extremism.

Third, the “R” (reintegration) under the Renamo process was still seen as a component of DDR rather than a broad set of socio-economic processes in which the ex-fighters are central actors.

Significantly, reintegration was not recognised as a complex process, influenced by varied factors for different ex-combatants according to their diverse settings. The demobilised fighters were each subjected to a uniform two-component reintegration support program:

(1) a reinsertion package of an estimated value of US$1 000, consisting of tools, clothing, seeds, and other items for personal use and

(2) severance payments totaling US$1 000 for a year regardless of age, gender, and status. An adaptive DDRR process in Cabo Delgado should be sensitive to the heterogeneity of the former ASWJ combatants likely to be engaged in such a process.

Fourth, the Maputo Accord neglected to link DDR with transitional justice and reconciliation. For example, the name of the 2019 pact — Maputo Accord for Peace and Reconciliation — implies the necessity of reconciliation between the signatory parties and the population, which bore the brunt of the armed conflict.

However, in practice, the “Mozambican Solution” of a blanket amnesty for atrocities by both sides, without substantive reconciliation and restorative justice initiatives, perpetuated the deep-seated fear, trauma, and hatred of the victims and witnesses of human rights violations toward former combatants.

Against this backdrop, an adaptive DDRR approach in Cabo Delgado can capitalise on the complementarities between DDRR, transitional justice, and reconciliation processes to help reconstitute trust between former combatants and communities.

Fifth, another lesson from the Renamo experience is that DDR must not be time-specific and rigid, and the process should allow for enough flexibility to innovatively find solutions to context-specific problems.

In the Cabo Delgado context, adaptive DDRR should invest in a proactive monitoring and feedback capacity that can generate the information the stakeholders need to continuously innovate and resolve new emerging setbacks and challenges.

Sixth, political and economic inclusion is required to address the structural inequalities underlying mobilisation, demobilisation, and reintegration of RENAMO, and ASWJ, combatants into civilian life.

About the writer: Gwinyayi Albert Dzinesa is an independent research and policy consultant.

He is author of, among several strategic books, Disarmament, Demobilisation and Reintegration in Southern Africa: Swords into Ploughshares?  published by Palgrave Macmillan.

Related Topics:MozambiqueSadcViolent Extremism
Up Next

Education in Zim at a crossroads