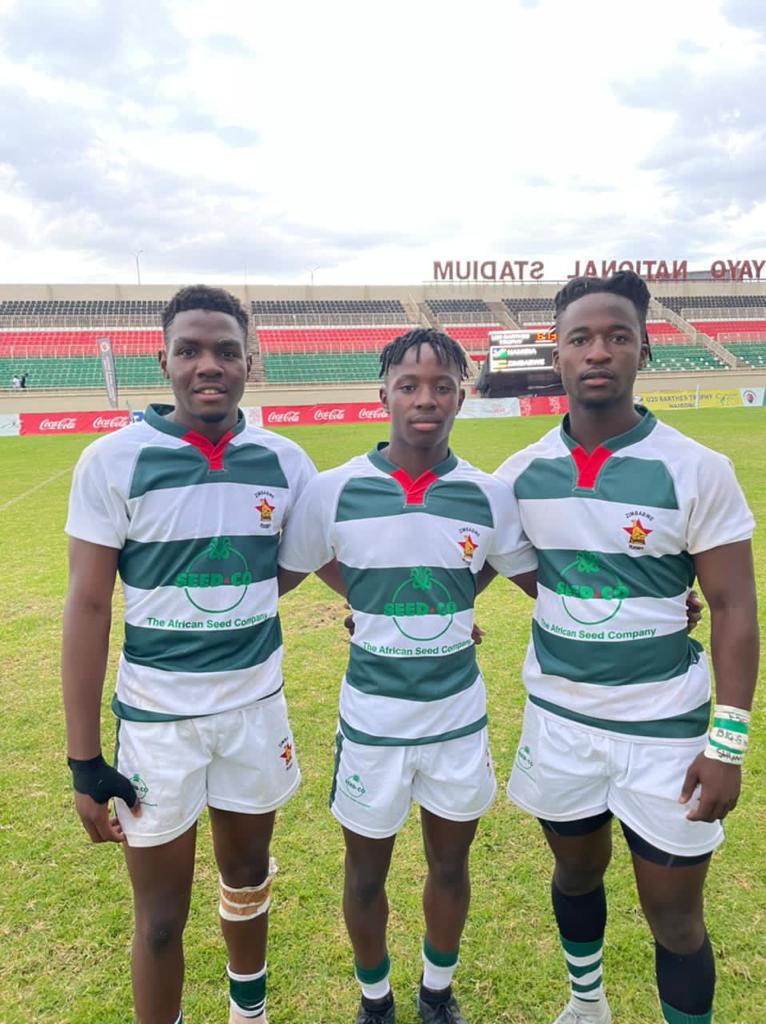 IN a thrilling see-saw final that swung this way and the other, the crowd came to life in the dying moments – baying for a local winner – after St Andrew’s College of South Africa had appeared to snatch the win from the jaws of defeat.

Maybe some of their Zimbabwean rivals would rather have seen Peterhouse College lose than have them get the home bragging rights – totally understand if you understand school rivalry.

But the majority of the crowd, in fairness, rallied behind the boys from Marondera in a match that had ended in a tie, final of the CABS St George’s Invitational T20 Tournament earlier in September.

He got off to a bad start, being smashed over deep-midwicket for a flat six. But Mataranyika maintained his cool admirably to concede just seven more runs in the rest of the over to leave St Andrew’s requiring 13 runs to take the trophy with them back home to Grahamstown.

Campbell McMillan turned Peterhouse’s batting super-over hero with 11 runs. He finished with a flourish after lofting a six over covers, ‘House’ winning on the penultimate ball.

Earlier on in the match, McMillan had massively entertained the crowd with his 65 runs off 41 balls as Peterhouse totaled the equaled 157 runs.

Quite interestingly, both Peterhouse super-over heroes are all-round sportsmen who will have a difficult choice to make between cricket and rugby, post-school days.

South Africa. The Academy Week is a South African inter-provincial schools rugby tournament a rung below the iconic Craven Week. Zimbabwe every year sends a national select side made up of the country’s best schoolboy players.

Mataranyika might find rugby more attractive on account of his imposing physical attributes. He is still only 18 and under a more professional fitness regime, he has potential to develop into a real menace out on the park.

But then he was in Zimbabwe’s squad at the Under-19 Cricket World Cup in the Caribbean earlier this year, the biggest youth tournament in the game. Most cricketers who are good enough to make the Under-19 World Cup side for their countries are a step away from professional cricket and Mataranyika should be no exception.

There have been a few exceptional cases though, a more recent example being that

of Roland Benade – a member of Zimbabwe’s 2006 Under-19 Cricket World Cup squad in Sri Lanka – who ended up starring at fly-half for the national rugby team, the Sables.

Alongside Mataranyika and McMillian is another star from the St George’s T20 event who could have a similar dilemma: Daniel Erasmus of St John’s College.

Erasmus is a hugely exciting talent in a variety of disciplines at St John’s, and his only highest level of representation was this

year with the Zim Schools rugby side at the Academy Week.

“They are both very good rugby players who would benefit from further development on their skills and tactical awareness to become complete players,” says Chirume.

“So I would obviously say rugby

as I have only ever seen them play rugby. But with their natural athletic ability, I would not rule out cricket neither. They should follow their passion.”

Hosts St George’s College were the defending champions of the CABS T20 tournament going into this year’s edition, but didn’t come close enough this time around.

They suffered a few derailing defeats, one of them at the hands of Churchill, who were powered by an explosive

batsman in the true sense of the term, named Shadreck Mandaza.

On Weaver Field – where St George’s has fought many fierce rugby battles with Churchill and Mandaza being involved in recent ones – the diminutive batsman really hammered the hosts’ bowlers to all corners of the ground in a scintillating innings that had his side easing past Saints’ seemingly challenging total.

Hearing of the Mandaza blitzkrieg, dozens of spectators

at the adjacent fields quickly moved across to Weaver to catch the last bits of entertainment. The little Churchill blaster was duly named best batsman of the St George’s tournament.

Mandaza’s approach to batting should not perhaps surprise, he is under the wing of somebody who modelled his own game along those lines. Churchill is coached by Johnson Marumisa, who had a short international career with Zimbabwe but acquired quite a reputation

domestically for an aggressive style of batting, which earned him a place in Zimbabwe’s squad for the inaugural T20 World Cup in South Africa in 2007.

With rugby, Mandaza is no slouch in that sport either. He was in Zimbabwe’s Under-20 Africa Cup-winning side in Kenya in April, a nippy half-back with the team-man qualities that make them one of the first players on every coach’s squad list.

And he is fortunate that at this stage in his young career, he has been coached by two ex-internationals in both his sports.

Zimbabwe Under-20 rugby coach Shaun De Souza, who he is also in charge at Prince Edward School, his alma mater, knows of Mandaza’s all-round gifts so well. Mandaza began his schooling at Prince Edward on a government bursary before circumstances beyond his control resulted in him moving to Churchill, his father’s workplace.

“He is PE blood, and a good all-rounder,” De Souza, the ex-Sables star and one-time captain, says.

“He’s a brilliant cricketer, I’ve watched him play. He has a good eye for the ball, as much as he is a good rugby scrumhalf.”

Because of other commitments, including examinations, players like Mandaza were omitted from De Souza’s squad for last August’s Canada International Rugby Series, organised by global governing body World Rugby to help qualified teams

De Souza reveals that Mandaza is firmly in his plans for the World Rugby Junior Trophy, further remarking that the Canada rugby tour omission presented an opportunity for the versatile teenager to also stake a claim in cricket.

“The thing is, a lot of people would not have seen him if he didn’t win that award in cricket,” De Souza comments.

“I know him as a cricketer and a rugby player. Sometimes when one door closes, other doors open. As much as that was not the reason of me leaving him out of the (Canada tour) squad, it also got him to look at his cricket.”

Before settling for rugby, De Souza was himself a multi-talented sportsman as a schoolboy – a record-breaking sprinter and basketball player.

A rugby man through and through now for the past 26

years, the 44-year-old mentor prefers to give Mandaza the freedom to make his own decision.

“For me, I would actually say he should look at both options,” De Souza says.

“He shouldn’t just jump into one basket, which is rugby. But ja, he can actually go to any code, he is that talented. I just think that he is a good cricketer, and if he puts as much time into it as he does in rugby, he can actually take his cricket to another level. But it’s

up to him, whichever codes he decides. I think he is a hard worker and he can actually excel at either code. So ja, he is a brilliant laaitie [young man], I like him.”

Some casualties in World Cup squad, it can’t be business as usual