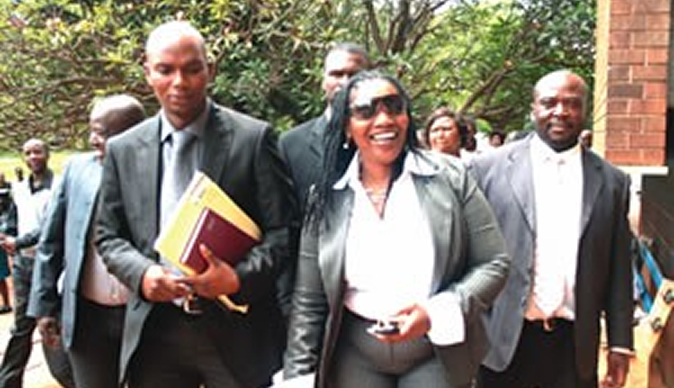 ZIMBABWE Miners’ Federation (ZMF) president Henrietta Rushwaya has been arrested at Robert Mugabe International Airport in Harare for allegedly attempting to smuggle six kilogrammes of gold worth US$400 000 to Dubai.

According to a police internal memo, Rushwaya (52) was charged under section 182 of the Customs and Exercise Act (Chapter 23:02).

She was arrested at on Monday afternoon.

The memo says on 26 October, information was received by detectives to the effect that Rushwaya intended to smuggle gold to Dubai through the airport.

“The detectives identified the accused as she commenced check-in processes and immigration formalities. The detectives immediately alerted the Civil Aviation Authority of Zimbabwe (CAAZ) scanner operators to thoroughly examine the accused’s bag,” the memo reads.

“Gold was detected by the scanner in the accused’s bag which formed part of her hand luggage. The bag was searched in the presence of the accused by CID (Criminal Investigations Department) MFFU (Minerals, Flora and Fauna Unit) detectives whilst other stakeholders at the Airport witnessed the search.

“A total of approximately 6kg of gold whose value is yet to be determined was recovered stashed in the accused’s personal luggage in her bag.”

The memo says Rushwaya was questioned about the origin of the gold and she indicated that she obtained it from one only identified as Ali of number 32 Lanark Road, Alexandra Park, Harare.

She indicated that Ali is a licenced gold buyer using the name Ali Japan 786 Private Limited. She alleged that she had been instructed by Ali to leave the gold to an unidentified person at Dubai Airport.

“The accused was asked to supply export documents in respect of the gold and she failed leading to her arrest. The recovered gold will be taken for assay to determine quantity and value. It will be lodged at Fidelity Printers and Refiners for safekeeping,” the statement said.

Rushwaya is expected to appear in court tomorrow.