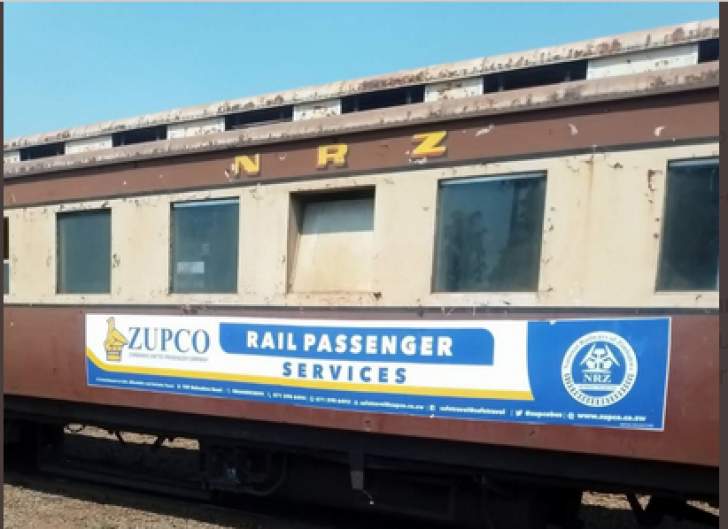 WHAT catches one’s attention upon arriving at Harare’s main train station along Kenneth Kaunda Street are the large Zupco stickers plastered on the sides of the old carriages.

To long-suffering commuters who struggle to find affordable transport daily, the newly introduced train service is a bargain. Surprisingly, there were no queues for the Zupco trains despite the unusually attractive ZW$40 fare for long routes such as Town-Mufakose.

To the average commuter, affordability does not get better than this. The process of securing a seat aboard the “people’s train” entails buying a ticket from the conductors who are stationed outside the carriages.

Once aboard, it becomes clear that the passengers are a mix of the young and the old. As the 5.30pm departure time of the Town-Mufakose route approaches, the seats within the ancient carriages are mainly filled by both the younger generation who have never been on a train before and old timers who still remember the efficiency of the “old” National Railways of Zimbabwe (NRZ).

“I remember back in the 1980s I used to travel regularly from Gweru to Harare by train. In those days the train was a very reliable mode of transport as it was used by a lot of people. The trains back then used to follow a very strict time schedule, for example if the departure time was 5.30pm, then the train would leave at exactly that time.

“This is my first time aboard a train after many years and I am hoping that I see the same professionalism by NRZ that we used to see way back. This (Zupco train) initiative is very good as it will help people travel to their various homes on an affordable fare, but as you saw out there the trains are not plying many routes and this is something that the government has to rectify,” said Godrey Karonga, a Mufakose resident.

A public address system announces that the train is due to depart in 10 minutes. This attracts some excited chatter from the young generation, which has not experienced this before. As the train conductors enter the carriage for a last ticket check, everybody glares at them.

For many, the novelty of a train ride is interesting. the younger passengers are particularly fascinated, frequently asking the conductors for more information about the train.

Some older passengers are curious to hear from the conductors whether the NRZ’s train service standards of old will be matched by this new “people’s train”.

At exactly 5.30pm, the train finally snakes its way out of the station, sparking cheers from the youths aboard, who excitedly wave at everyone as the train passes through the outskirts of Mbare right beside Lytton Road.

Minutes into the journey, after they have settled in their seats for the trip, some of the passengers begin examining the cabin, remarking that the train looks very old. The seats, though intact, have seen better days.

The windows remain open throughout the journey; owing to disrepair, the window mechanism is no longer working. And even a look at the yellow locomotives which pull the carriages shows that they have probably been around since the time Zimbabwe was officially called Rhodesia. Clive Ndemera, a commuter, said despite the trains being old, the saving that comes with paying just ZW$40 for a trip, which usually costs between ZW$120 and ZW$180 by road, plus the added advantage of avoiding traffic congestion, mean the train is a far better mode of transport.

“This is my first time on a train and to be honest it is quite obvious that these trains are very old and are probably the same trains which were used by our grandfathers, but they are very affordable. From town to Mufakose, I pay between US$1 and US$1.50 per trip using private cars.

I cannot use the Zupco buses at Copacabana (central bus terminus) because the queues there are very long,” Ndemera said.

“Now with an alternative like this, it means I can save a lot of money in transport costs and this is money which can be channelled towards other important things such as rent and groceries. An added advantage I have seen today is that we do not have to worry about the serious traffic congestion which occurs during peak hour,” he said.

The timetable at Harare Train Station says the train departs the central business district (CBD) for Mufakose at 5.15am and arrives at 6.10am, before departing again for the CBD after collecting passengers. In the evening, the train leaves for Mufakose at 5.30pm, arriving at 6.10pm.

On each trip, the train makes stops at Lochinvar, Rugare and Kambuzuma on its way to Mufakose.

Despite being the cheapest mode of transport available, some commuters complained about the time it takes for the train to travel from one place to another, especially those travelling to relatively distant destinations such as Ruwa.

“I have no choice except to come here at the National Railways of Zimbabwe (NRZ) looking for a train to go home. As you can see, these trains are dirty, rusty and they are slow. We are going to leave the railway station at 5.30pm and then we will arrive at 6.30pm. It takes a lot of time to reach our destiny,” Tinashe Maburuse, a Ruwa resident, said.

“As a vendor l can’t manage the fare which is charged by private transport, that’s the other factor which pushes me to come here. At the 4th Street (Simon Muzenda Street) bus terminus where we are supposed to find buses, people are overcrowding, waiting for the buses to ferry them.”

Another commuter, Miriam Chigebeza, said the train was not convenient for someone who catches two lifts to work. “I woke up early at 4am so that l will have time to go to the railway station. At 6.45am the train will depart for town, it has a timetable to adhere to.

“The challenge that we have with these trains is that it takes an hour to reach town, whereas I’m supposed to be at work at 8am. I work outside the city centre, so I’m supposed to look for further transport to my workplace. These trains are also old. The same trains they inherited from (Rhodesian prime minister) Ian Smith years back ago, today they are re-naming them Zupco buses. Instead of moving forward as a country, we are going backwards,” she lamented.