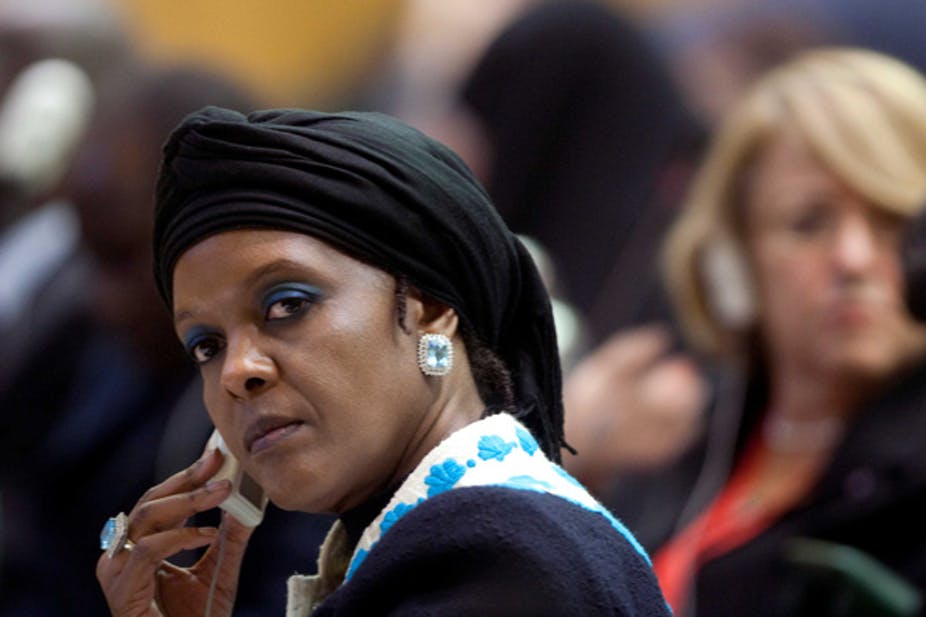 PRESIDENT Robert Mugabe’s widow, Grace, is fretting over her son Robert Jnr’s newfound acquaintances who have nudged him into embracing his father’s “tormentors” in Zanu PF, amid fears he is being exposed to danger.

Robert Jnr hit the headlines after appearing at the Zanu PF St Mary’s rally two weeks ago in the company of self-proclaimed prophet Passion Java and other socialites.

This has seen the former First Lady fearing that her son is being dragged into the dangerous internecine fights, given how she and Mugabe were hounded out of the ruling party.

Mugabe was ousted via a military coup plotted and orchestrated by President Emmerson Mnangagwa and Vice-President Constantino Chiwenga who was then Commander of the Defence Forces. After he was hounded out of the party, Mugabe declared he would not vote for his tormentors ahead of the July 2018 national elections.

The ousted leader added that upon his death, he would not want them pontificating at his funeral. This signalled his deep-rooted anger against Mnangagwa and other loyalists in the military and government who had betrayed him.

“She is worried and very angry with him at the same time,” a Mugabe family source told The NewsHawks this week.

“The former first lady only learnt about the Passion Java, Robert Jnr links a few weeks ago and she is not happy with that. Not only Amai is unhappy about that, but the whole family,” the source said.

It emerged that although some of the Mugabe family members are said to be struggling to access their money, part of the US$10 million left in a nostro account at a local bank, Robert Jnr had his money facilitated easily, with sources saying the former first lady was even called to block the transaction, but refused, grudgingly saying her son was old enough to handle his life.

“Some officials called Grace for her to stop the transaction, but she refused. She said he was a grown up and should not be taught about his life. She said that out of anger and she is still angry with him,” the source said.

In an interview with a local online platform, Robert Jnr confirmed his relationship with Java, whom he described as “a spiritual figure in my life”.

“Our relationship is just natural,” Mugabe’s first son with Grace said. “I first saw him on social media and thought he was a funny guy. He is smart and I always wanted to meet him and it so happened we were in Zimbabwe at the same time. One of my friends who knows him linked me and we linked up and we now spend a lot of time almost every day.”

“He is a spiritual guy, a decent and straight per[1]son and I look at him as a mentor. He is like a spiritual figure in my life. He is wise, a wise guy,” Robert Jnr said.

It remains unclear how Java has amassed the riches he often flaunts on social media, raising suspicion he could be involved in illicit deals, hence the source of Grace’s fears about her son, who says he has interests in mining, agriculture and other businesses.

Robert Jnr made a surprise showing at President Mnangagwa’s St Mary’s rally recently, where he took the opportunity to greet his father’s former deputy, who then asked him how his mother was doing.

He received a rapturous welcome by thousands of Zanu PF supporters when he was introduced by his uncle, the ruling party’s national political commissar, Mike Bimha. Mnangagwa, however, did not mention him in his address.

Affirmative Action Group (AAG) sources told The NewsHawks on Thursday that the sacking of Java and his executive, including the grouping’s president Mike Chimombe and his whole presidium followed alleged attempts by unnamed individuals to extort money from Robert Jnr, amid promises to protect his business ventures and lining up a meeting with Mnangagwa.

AAG founding president Philip Chiyangwa, who on Monday announced the new AAG team led by Scott Sakupwanya, was not immediately available to comment, but indicated this week that his organisation deserved people of integrity, who do not solicit money from individuals.

Commenting on the late former President’s last days, Robert Jnr said: “My dad was sick for a long time, for like 10 years, so it was just like a matter of time, so for those years we knew as a family that anytime the doctor would tell us he has a couple of days or months to live, but that day never came.”

“When 2017, 2018, 2019 came, when I went to Singapore, he came for his treatment and stayed a couple of months, but those five to six months he was there, he was very ill, he was not coming out of bed, didn’t want to eat and we would push him in a wheelchair. It’s a lot, seeing someone who used to take care of you, they are vulnerable, it is painful.”