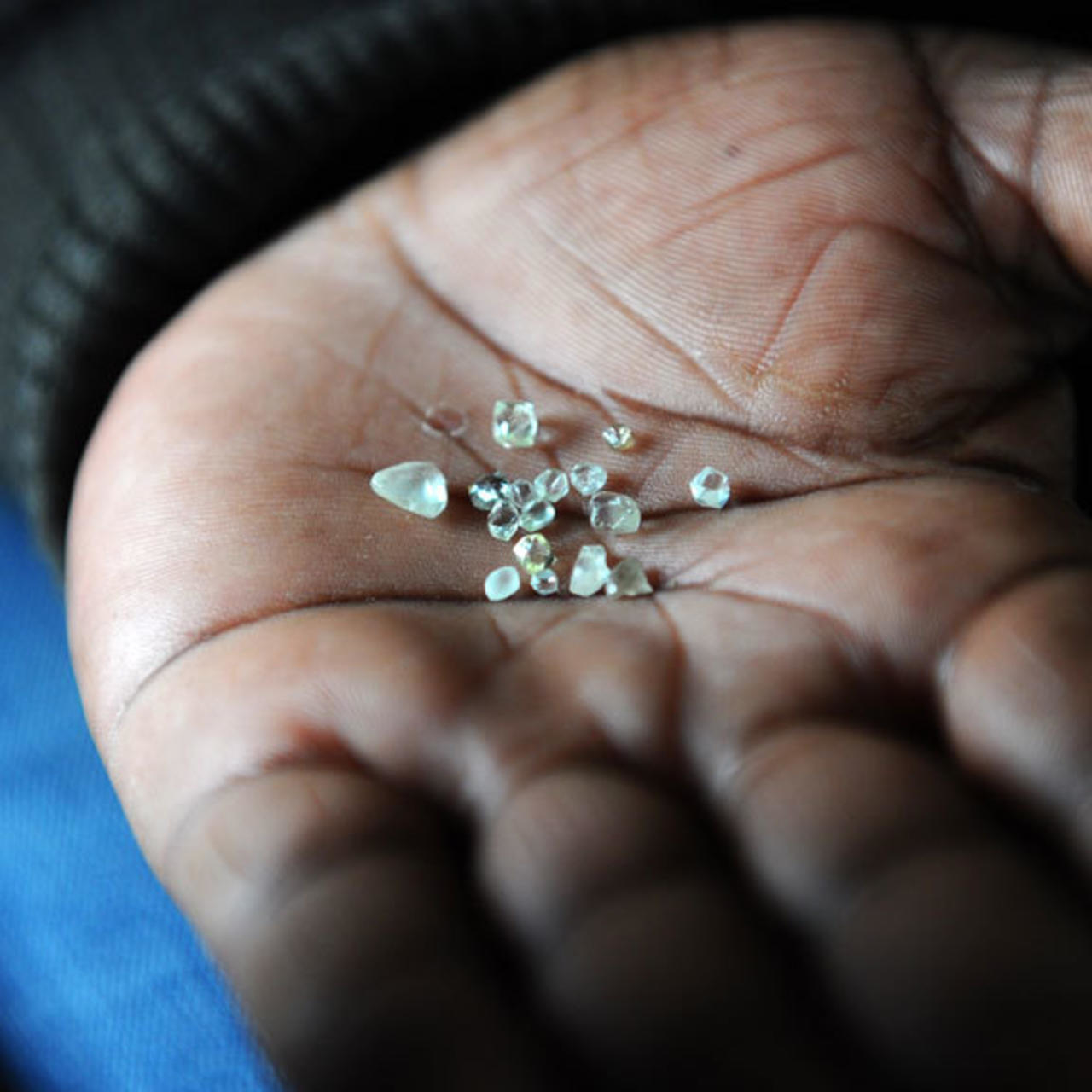 GOVERNMENT, through the Reserve Bank of Zimbabwe (RBZ), has robbed the state-owned Zimbabwe Consolidated Diamond Company (ZCDC) millions of United States dollars by buying five million carats of gems using the depreciating local Zimdollar currency (or RTGS) without fair value in a murky deal, The NewsHawks has been told.

Information gathered shows that while diamond buyers have been anxiously awaiting a public auction for Zimbabwe’s diamonds since April, when ZCDC announced it would start monthly sales of gems through competitive bidding, the RBZ last month quickly moved to mop up some precious stones behind the scenes.

RBZ bought diamonds from ZCDC using RTGS, goods and services through a process which prejudices the company of millions, particularly due to the controversial foreign currency retention policy. Under the RBZ’s forex retention policy, exporters get 60% of their earnings in US dollars.

Authorities say the diamonds are part of reserves, but there are fears they could be resold clandestinely in the local or international markets to benefit corrupt officials rather than the nation. There are also fears the diamonds are being used to fundraise for Zanu PF campaigns ahead of the 2023 general elections.

Taking the minimum price of US$939.41, it means five million carats cost US$4.7 billion if they are of high quality. However, if the parcels are of low quality, which is largely the case in Zimbabwe, as most of the production is industrial diamonds, the figure becomes much less than that.

“There are three important issues that arise out of this deal. Firstly, there is a problem of transparency and accountability with the transaction. Secondly, there is a fair value gap involved in the process due to inefficiencies and imbalances created by government policy,” a mining executive in the diamond sector told The NewsHawks.

“The third issue is where are those diamonds going? Are they going to be part of state reserves, or they will be resold at international market prices? If so, who benefits out of that arbitrage? These things need to be explained openly and properly for the public to know what’s happening. Diamonds have previously disappeared in the custody of state institutions. The whole situation is disturbing.”

ZCDC, struggling to establish itself as a mining giant, was formed following the 2015 government decision to consolidate all diamond companies in Chiadzwa to form a wholly-owned state entity. It currently has operations in the Chiadzwa area, while it is conducting extensive exploration and evaluation across Zimbabwe in search of economically viable diamondiferous Kimberlite pipes.

Sources said the dodgy deal has alarmed the company’s executives who are desperate to boost revenues and expand operations. It has also brought into sharp focus how natural resources are being managed in the country — raising transparency and accountability issues — and their limited impact on the economy and development. Some now talk of a resource curse in Zimbabwe, also called the paradox of plenty or poverty paradox.

Sources told The NewsHawks that RBZ bought diamond parcels using RTGS — paying 40% in Zimdollar, while 60% would be paid in goods and services. Paying 40% of the cost through RTGS effectively robs the company of fair value.

It rips-off ZCDC as the official exchange rate is much lower than the parallel market rate. RBZ governor John Mangudya confirmed the central bank had bought diamonds from ZCDC, but denied the parcels amounted to five million carats as indicated by mining sources.

“For starters, RBZ didn’t buy five million carats of diamonds from ZCDC. We bought the excess diamonds that ZCDC had in line with Statutory Instrument 187 of 2022 wherein the bank can purchase excess diamonds for the purposes of building reserves in kind,” Mangudya said.

“The diamonds purchased were in excess after ZCDC had met its export demand or diamonds auctions. The arrangement is at best very beneficial to ZCDC as it is able to meet its export demand, with the excess bought by RBZ assuring the company income.”

ZCDC officials however said the deal was not helping the company, as the prejudice ran into millions.

“Point number one; the diamonds were bought through a reserve price which brings in low revenues to company, as compared to what could be realised in a competitive auction where foreign traders bid.

“Number two, the RBZ imposed a clause in the trade agreement, whereupon it pays 40% in RTGS, while 60% is paid in goods and services like fuel or mining machinery spares under a draw-down arrangement involved. This is not helping ZCDC at all.”

However, Mangudya insisted that there was nothing wrong with the arrangement.

“Payment of 40% in local currency is in line with the current export retention policy,” he said.

Sources said the diamonds parcel bought by the RBZ consisted of fine gems and industrial quality diamonds which could earn the country more revenues if sold transparently at international market prices.

“The suspicion in the mining sector is that those diamonds bought for peanuts would be resold for a fortune in the international market and the money channelled towards Zanu PF’s 2023 election campaign. It could be a way of fundraising for Zanu PF using public resources,” a source said.

Zanu PF previously used Marange diamond revenues from Treasury and mining companies to fund its political and electoral activities, taking advantage of lack of transparency and accountability in the sector.

“I cannot discuss the matter over the phone because issues to do with diamonds are very sensitive; I would prefer a physical meeting to explain the context of the sale of the diamonds, but right now I’m busy; as we speak, I’m driving,” he said.

Parliamentary portfolio committee chairperson Edmund Mkaratigwa said he is not aware of the transaction. His committee plays an oversight role on mining activities.

“It is our expectations that all is on record and upon our request we will get full details of whatever transaction that might have happened. These are national public resources, and we continue to represent the people, ensure oversight and legislate for the good of our country. Transparency is a key requirement in our constitutional democratic tenets,” he said.

Zanu PF spokesperson Christopher Mutsvangwa did not respond to WhatsApp messages sent to him. Asked to respond to claims that the diamonds were part of a process to raise money for the Zanu PF for election campaigns, Mangudya said: “How does buying a product by RBZ help anyone in this regard when it is RBZ parting away with money? I don’t get it?”

Leaders of civic society organisations working in Marange said the transaction raised eyebrows and must be publicly explained. James Mupfumi, Centre for Research and Development director, said this issue highlights how Zimbabweans are not benefitting from their natural resources being looted by elites.

“Minerals in Zimbabwe are better reserved below the surface than in the hands of our government. There is a community of 26 000 people in Marange, where these diamonds are being extracted, which is living in abject poverty,” Mupfumi said.

“Against a background of Zanu PF being broke and an election ahead, it becomes clearer where those captured diamonds are going. Needless to say, diamonds are known to disappear in custody of state institutions as confirmed by auditor-general’s report on parastatals of 2019, where 41.699.85 carats of diamonds disappeared at MMCZ (Minerals Marketing Corporation of Zimbabwe).”

Mupfumi also said it “is evidently clear that government has failed to combat rampant corruption in the mining sector, where political elites are actively involved”.

“Besides corruption, there have been terrible state-orchestrated human rights violations in Chiadzwa. Government repression is suppressing the community from expressing itself and protesting against those pillaging the resources,” he said.

Amalgamated Chiadzwa Development Communities Trust leader Jay Kasakara said villagers were promised proceeds from diamonds will be partly used to develop their area, but nothing has happened.

“We are surprised RBZ is buying diamonds instead of leaving that to the market. Diamonds should be sold openly in the market to ensure that we make the most of it and use the money for development,” Kasakara said.

“There is nothing communities are getting from these diamonds, except food hampers.”

Zimbabwe last month assumed the chairmanship of the Kimberly Process Certification Scheme for 2023. It says it wants to build a US$12 billion mining sector by next year.

Used clothes salvage Xmas for many

Singing the blues as hunger blights the festive season