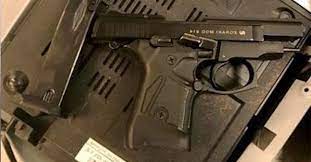 FORMER United States soldier Ronald Leon Johnson, accused of unlawful possession of a firearm and boarding an aircraft with the weapon without permission in Zimbabwe, faces 20 years in prison.

Johnson was arrested at Robert Gabriel Mugabe International Airport in Harare enroute to Victoria Falls on 15 February. He had been in the country on a month-long tourist visa with his Zimbabwean girlfriend since 5 February.

The state says Johnson may have harboured ulterior motives in carrying 45 rounds of ammunition on holiday.

Johnson reportedly refused to grant law enforcement agents access to his mobile phone when they wanted to check his communication for the duration of his stay in the country.

A court ruling on the matter is set for tomorrow at 10.30am.