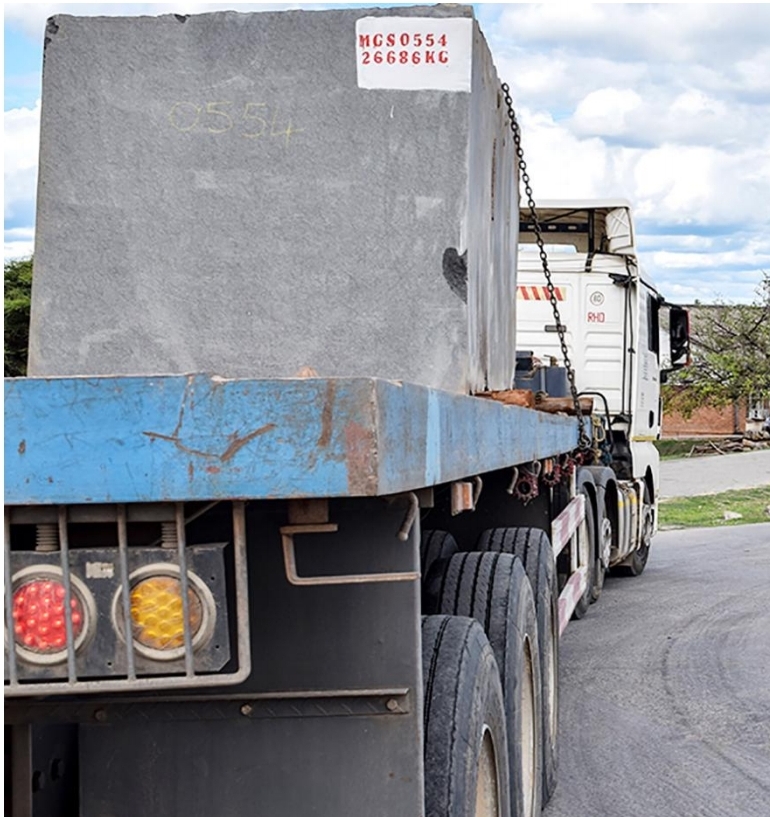 FOREIGN mining companies supported by local entities, government and administrative officials are plundering black granite from Mt Darwin, Murehwa and Mutoko, making millions of US dollars in the process while leaving villagers in the depths of poverty and despair.

An investigation into granite mining operations in Mashonaland East and Mashonaland Central reveals negative social and economic impact on the life and livelihoods of communities rather than an improvement of their welfare.

The bulk of the granite is then exported to Europe, particularly Italy and Spain, but the proceeds hardly tickle down to affected communities.

Among the negative consequences of the granite extraction are large-scale violations of land rights, environmental degradation, forcible relocations and evictions, discrimination, labour rights violations including perpetual short-term contracts, denial of the right to organise and the right to collective bargaining, corruption, failure to comply with health and safety standards for employees, exposure of communities and workers to pollution, and pollution of the living environment. This includes pollution of the air, soil, water and noise pollution.

According to a report titled “From Mountains of Hope to Anthills of Despair: Assessment of Human Rights Risks in the Extraction and Production of Natural Stone in Zimbabwe”, by mining law experts James Tsabora and Darlington Chidarara, granite extraction involves huge tracts of land, resulting in the disruption of livelihoods. This includes disturbance of small-scale agriculture and livestock ranching, among others.

The report was launched at a local hotel last week.

“Massive disturbances are induced on community lands by granite mining companies. The extreme noise from blasting disturbs both humans and livestock. Extreme levels of dust make habitation in the vicinity of these operations impossible. The vibrations from the trucks transporting tonnes of granite cause cracking on the houses located by the roadside,” the report reads.

“Mining activities are therefore difficult to co-exist with other community activities. A study of the legal framework, conducted in this research, illustrates that the existing mining legal regime does not address human rights risks inherent in granite mining operations. The laws are dedicated to ensure effective and optimal extraction of natural stones, and this also applies to other minerals in Zimbabwe.”

The report notes that the natural stone industry, which includes the granite mining sector, has grown rapidly in the past three decades to become a key economic sector in Zimbabwe. It is constituted mainly by quarrying or extraction companies. There is very little processing in the country.

The industry was initially dominated by European-based companies from Italy, Spain and other nations, but in the last 10 years, Chinese companies have also gone into the sector.

There is also Zimbabwe International Quarries, which has Zimbabwean and Spanish shareholders.

Quarrying Enterprises has been mining since 1986 and has a shareholder mix of Italians and Zimbabweans.

Ilford Services Mining Company has been in business since the mid-1980s.

Granite mining is generally given the term granite quarrying. A quarry is a place where rocks, sand, or minerals are extracted from the surface of the earth. It is also usually a type of mine based on an openpit mining approach because it results in massive digging, blasting of rock surfaces and creation of huge holes, pits and enclaves in mountains. Other forms of quarries are sub-surface mines, consisting of underground tunnels or shafts.

“By their nature, quarries change the physical environment. They displace huge amounts of soil and plants and force people and animals out of their areas. Abandoned quarries rarely leave enough soil to allow life to return to the area; they become dangers to life and limb of livestock, wild animals and human beings,” the report reads.

The most common natural stone that is extracted through quarrying in Zimbabwe is black granite, which is mainly used for construction, tiles and tombstones.

“In recent times, a domestic market has arisen in Zimbabwe, though it is clearly dwarfed in significance by the export market. The mining of black granite in these districts has a long history. Local granite is exported to South Africa, Mozambique, European Union countries, and the United States, among other markets. It has been mined in some parts of the Mutoko district since 1972, and more than 10 companies are mining black granite in this area alone.

“Villagers, as the community members, double as employees in quarry mines in most cases, but most are restricted to basic casual labourers. Currently, the contribution of granite exports is relatively small, being less than 2% of the national export value.”

Mozambique is the biggest importer  of Zimbabwe’s granite at 43.2%. However, Mozambique proceeds to export over 90% of its granite to Italy and Spain.

“Most probably 95% of mined granite is shipped in raw blocks. There are few cutting and polishing factories in Zimbabwe that supply the local market. Some of these factories are subsidiary companies of the mining companies,” the report says.

The report reveals that profits are concentrated in the hands of the few and have no multiplier effects.

Operations do not adhere to minimum labour standards, environmental regulations and have caused considerable damage in the form of air, land, and water pollution, land degradation, deforestation, and lowering water tables.”

The report highlights that corruption is rampant in the sector, particularly in the awarding of mining licences and in the inspections and monitoring by inspectorate bodies.

“State institutions are complicit in the corruption; the research found that senior government administrators, licensing authorities, governing political party functionaries and law enforcement agencies create a network of corruption. This network benefits in the awarding of mining claims and are not subject to serious monitoring and inspections by regulatory bodies. The consequence, as the research observed, is that as a human rights risk, corruption is not being dealt with,” the report reads.

“It appears from the research that corrupt activities in the sector are exacerbated by the government’s political slogan ‘Zimbabwe is open for business’. Under this programme, local authorities, traditional leaders and community leaders are urged by the government to support investment, and not be obstacles. These persons are thus central to spreading the message of investment for development, and implicitly urge consultative processes to support establishing of operations, in lieu of submission of objections.”

“The environmental impact of granite mining is physically evident in most parts of Mutoko and Mt Darwin. Mountains and hills have been cut, huge swathes of forest and bush have been cleared, temporary pathways have been created in the forests for movement of heavy vehicles, and boulders of waste rock, or unsuitable rock lie scattered in the foot of the mountains, fields, forests and grazing lands in these two districts,” reads the report.

“Gaping holes are also evident, with few, if any, granite mining interested in rehabilitation.”

The report highlights that other than physical degradation of the natural environment, the destruction of forests, hills and mountains, granite mining has led to: siltation and diversion of rivers; decrease in the water table; exposure of soil and land to erosion; increased amounts of dust; boulders scattered over land and fields and huge pits and open surfaces on land previously undisturbed.

“Those interviewed decried the massive water abstraction and use by mining companies which led to a decline in the water table. Some members pointed to massive air pollution caused by dust from mining as well as increased soil erosion.”

“Further, mine vehicles require flat roads, and not the hunchback roads we have in Zimbabwe. The movement of these vehicles gradually flatten these roads, leaving gaping potholes, and making roads unsuitable for motor traffic movement. When companies leave the place, the dust roads they would have created end up as temporary streams that develop into huge gullies for run off. The end result is destruction of fields, flooding of silted rivers, temporary flooding, increased erosion and removal of the fertile topsoil,” the report reads.

The report noted that granite mining operations consume large pieces of land which is usually occupied by communities.

“A general physical survey testifies to the large area of land that is required in granite mining. It was pointed that for a granite mining licence, the minimum area that must be pegged under the law is 50 hectares,” the report reads.

“On most occasions, this land is communal land that is used by communities for subsistence agriculture, residential settlement, firewood and pasture lands, movement, water abstraction, grave sites and other community rituals.”

“Most villagers interviewed lamented the ease with which they can be evicted, forcibly relocated and given alternative lands elsewhere by mining companies, with government authorities supporting such forcible evictions and relocations,” the report says.

In addition, villagers decried that there are no clear compensation regimes established under the law.

Communities pointed out that they were at the mercy of mining companies, and government departments at district or provincial level were unable to assist.

“There were few cases of compensation for relocation from interviews with community members. According to one councillor, the highest amount of compensation paid was US$5 000 and the councillor was involved in the negotiations,” the report says.

“Interviews with a representative of the Black Granite Workers’ Union indicated that there is high job insecurity in the sector. Further, the union’s estimation of workers on three months or shorter contracts was more than 80%,” the report says.

“The use of short-term contracts for an unlimited number of times is clearly illegal under Zimbabwe’s labour law. The relevant provision is section 12 (3) (a) of the Labour Act. In terms of this provision, a fixed contract can only be renewed two times. Any renewal or granting of a short-term contract for a third time means the contracted worker is now a permanent employee. Accordingly, mining companies are in violation of section 12(3) (a) of LA. Workers do not receive contracts when they are contracted for a month – they just sign in their details in a company register.”

Related Topics:Black granite ZimbaweEnvironmentMining
Up Next