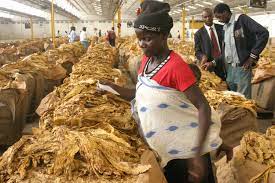 VARIOUS empirical studies done by different researchers on contract tobacco farming and its viability among smallholder farmers in Zimbabwe have found that most of the golden-leaf producers are reeling from debt and poverty.

This is contrary to the popular narratives that since the tobacco industry is a money-spinning sector, whose market value is about US$1 billion annually, farmers, who do all the dirty work, are also minting money in the process.

However, different research show that farmers are drowning in a sea of debt and poverty, while tobacco big merchants make megabucks. There are 31 tobacco merchants in Zimbabwe currently.

A study, titled Tobacco farming and current debt status among smallholder farmers in Manicaland province in Zimbabwe, published last year by three local researchers based at the University of Cape Town School of Economics, Rutendo Chingosho, Chengetai Dare and Corné van Walbeek, shows that farmers are getting a raw deal from tobacco buyers and government.

“There is no evidence to suggest that tobacco growing, in its current state, has benefitted the tobacco farmers in Manicaland province. Tobacco farmers are largely victims, rather than beneficiaries, of the sector. There is a strong case for government intervention to improve the conditions of tobacco farmers, either through direct intervention in the tobacco-growing sector, or by encouraging and promoting crop substitution,” the study says.

“The results of our study indicate that while most farmers in Manicaland province in Zimbabwe operate under the contract system, an overwhelming majority of them are unhappy with the returns that they get from producing tobacco. Nearly 60% of farmers indicated that they are in debt.

There is no evidence from this study that suggests that tobacco growing, in its current state, benefits tobacco farmers.

“The obvious policy implication of this study is that the government should intervene to improve the economic conditions of tobacco farmers. For example, imposing some ‘meaningful’ price control on tobacco leaf would allow farmers to get more revenue for their tobacco crops and would improve their chances of breaking out of the cycle of poverty.”

Since most tobacco farmers have limited options to shift to other crops, government support may include facilitating improvements in the markets for these alternative crops,  it says.

“Considering that Manicaland province (particularly Odzi, Shamhu and Headlands) has large swathes of arable land, which are suitable for a variety of crops, farmers are likely to improve their livelihoods by switching to other crops,” the study notes.

“Changing the structure of the Zimbabwean agricultural sector will require political will and resources. Sadly, both are missing in Zimbabwe at present. The fact that China plays an increasingly important role in Zimbabwe, also in the tobacco sector, makes it politically difficult to reduce the country’s dependence on tobacco production.

“Also, the country is in a dire economic situation and considers tobacco-leaf growing an important economic sector. What this paper has shown is that the tobacco farmers in Manicaland province are, largely, the victims, rather than the beneficiaries, of this sector.”

Another research, Tobacco contract farming in Zimbabwe: power dynamics, accumulation trajectories, land use patterns and livelihoods, done by Freedom Mazwi, Walter Chambati and George T Mudimu, says despite the “tobacco boom” in the aftermath of Zimbabwe’s chaotic and violent fast-track land reform programme, which resulted in a massive growth of the country’s tobacco sector, there is a downside to the positive story that is often ignored.

“Some authors have labelled this, the ‘tobacco boom’. The effects of this growth are variegated across space and time. This study explores the growth of tobacco contract farming in Goromonzi and Zvimba districts and the resultant effects on land use patterns, accumulation, power dynamics and livelihood outcomes,” it says.

Another research, Contract farming arrangement and poor resourced farmers in Zimbabwe, by Mazwi, Chambati and Knowledge Mutodi says: “This study sought to understand the impact of contract farming on livelihoods among the small-scale farmers in two study districts of Zvimba and Goromonzi which are located in the Mashonaland Provinces.

“This was done through examining different levels of income earned between contract and non-contract tobacco growers, food consumption rates, land use patterns and asset accumulation among other indicators. The asymmetric power relations between farmers and buyer firms was as well examined. Evidence shows that contract farming has improved access to high-yielding input, better extension service, incomes, while also contributing to asset accumulation when compared to noncontract farming households.

“However, lack of platform in the contract design process disadvantages farmers and exposes them to different forms of buyer firm exploitation such as the charging of high interest rates on inputs.”

Most of the tobacco small-scale farmers in different farming areas are drowning in debt, impoverished by big merchants who lure them into liabilities through contract arrangements and incentives — credit and inputs.

Before each farming season, farmers get inputs and after harvest and sales, the contract growers — entangled in debt — see all their proceeds deducted to pay off arrears, leaving them with little or worse off.

To make matters worse, farmers get 40% of their money at the official bank rate (US$1: ZW$85), while some of their inputs and goods for consumption are sold at the black market rate,  now scaling US$1: ZW$160.

This means farmers are exploited by tobacco buyers and also mugged by government which seizes their hard currency and gives them local units at the official exchange overvalued against the United States, hence depriving them of real value.

China’s state tobacco company is massive at home. Now it’s ready to take over the world