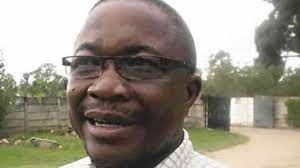 THE Zimbabwe Commercial Farmers’ Union (ZCFU) is embroiled in a factional fight, with members aligned to the former executive led by Wonder Chabikwa (pictured) accusing the Shadreck Makombe management of turning the union into their personal property.

But the Makombe executive has hit back, accusing the Chabikwa administration of misappropriating €86 000 (US$101 916), two vehicles and computers, among other allegations.

Makombe, the former secretary general of ZCFU, was elected president of the union in November 2018, succeeding Chabikwa.

The NewsHawks understands that Chabikwa, who lost the position to Makombe more than two years ago, has been challenging the polls.

Some of the members aligned to Chabikwa have reportedly formed a splinter group led by former ZCFU vice-president Maivepi Jiti.

“A small team of leaders of a union led by ZCFU president has gone on a looting spree. Babbage (Winston) heads the Matabeleland region and he is part of the stealing gang. The elected officials, led by Makombe have personalised union property, including a building supposed to be an office,” one of the disgruntled members told The NewsHawks.

“They have formed a company and appointed themselves as directors, without consulting membership. They continue to collect levies from farmers despite the fact that they are no longer a union. The union is almost dead now . . . members are leaving.”

In an interview with The NewsHawks, Makombe, however, said when he came into office in November 2018 he ordered an audit to be done. He said he is being fought because of the audit.

“Right now, as I talk to you, the people who are saying that formed their offshoot and like my predecessor, the former president (Chabikwa), took two union vehicles and that’s a criminal offence,” he said.

“He had his reasons to say the union owed him, but that has got nothing to do with the vehicles which were donated by the European Union. Going back, he misappropriated
€86 000 which is just as good as the United States dollars in terms of strength,” Makombe said.

Chabikwa denied the allegations, saying they were false. Makombe, however, maintained that Chabikwa’s administration even went to the courts, trying to eject them from the office, with little success.

“They went to the courts and applied for a court order where they thought they would eject us because what they did, the then director who was meant now to give us information did not do so, they connived and when they got a court order that was a default judgment,” he said.

“Then we went to court and due process was done, they lost everything. It’s an issue of sour grapes because my executive is a professional executive. The house they are talking about is under a company called Savanna Exports and by virtue of me being the president and the secretary-general we are the people who are responsible for that trust because it’s a trust.”

From the onset, Makombe said the president and the secretary-general became the directors of the company which was formed many years ago “because it’s owned by the union and there is nothing wrong about that.”

“Savanna is our investment vehicle that owns that house and it’s into exports. Everything being equal, when farmers export they should export through Savanna and that’s why when this house was bought, it was bought along the airport road because the understanding is by then we were sending through airfreight and when you go to the airport that’s where you get most of these companies which export fresh produce. That’s where they are located.”

Makombe said his executive had started taking people who “ransacked the union property” to court.

He said the European Union had capacitated them, from provinces to districts, with computers and everything but “these ones who left office took that property.”

“Even one of our former lawyers when we were having challenges in paying his legal fees we had made an arrangement to give him a vehicle. Every time he used our vehicle, he would cost us and it was going towards the legal fees but what we have since done is we have paid that lawyer but he still has our vehicle.

“We have nine vehicles, but only one is there. So you would find these people, the malcontents we are talking about, thought they were going to benefit scrupulously. So the house they are saying we have personalised is a union property and it has got nothing to do with the day to day of the union and this is the same thing if you check will all unions,” Makombe said.

Makombe said the investment vehicle was meant to run the union financially so that they do not resort to membership for financial bailouts.

“It’s only an issue of sour grapes because they know the net is closing in on them. As they talk of me, I am not apologetic; I am a board member of a company called Savanna Exports. So on that one there is no apology to make,” the ZCFU boss said.

“For sure, we have got a building which was meant for our offices but relocated to the Zimbabwe Agricultural Society show grounds because at the show grounds that’s where all agriculture activities are happening and that house is meant for exports and it’s strategically located along the airport road because it’s meant to export perishables through the air.

“These are people who are looking for problems where there are no problems. What’s wrong with me, as the president, becoming the director like what my predecessors were doing? It’s not me who reinvented this thing and it was as a result of a council resolution.”

“They forged a document without the knowledge of the union . . . for example Tichafa Mbiriyakura is not known to other members. Ask Makombe Shadreck, the president, who this Tichafa is, he won’t explain,” one member said.

But Makombe said the secretary has “nothing to do with companies because they are the ones who are responsible for the change of shares as they are registered. That one by his own right, he is a member of the union of course.”

“However, it’s not obligatory that the secretary should be a member of the union. A secretary is responsible for filing papers,” he said.

“It was done long back and that company was not formed by me when we were still Indigenous Commercial Farmers’ Union. So those malcontents, ask them about a union which is led by Mai Jiti (former ZCFU vice-president Maivepi Jiti) and how it came into being,” Makombe said.

“Actually the route we are taking through that company, we are saying why we don’t also open offices to where we sell our things. That’s what we are doing. So you find my predecessors were squandering money and not investing or doing anything. The union was in the papers for the wrong reasons but us we said we must be seen to be producing and performing.

“I am the president and by virtue of my office I become the director and the secretary-general by virtue of his office becomes the director. We are the people who are meant to interact with the outside world. Actually, we will be forming such companies differently when we have got our export markets and we will be engaging our youngsters who have got no employment to run such companies.”

ZCFU vice-president Winston Babbage said: “They’re lying. Here in Matabeleland we are okay, there is nothing wrong. We have our office running. We have some splinter group that left I think a couple of years ago.”

The ZCFU is a registered farmers’ union, in terms of the Farmers Licencing and Levy Act, CAP 18:10. The union was established by large-scale indigenous commercial farmers who entered the business of commercial farming after independence.

Some of the founding members are Teererai Mugabe, Patrick Paradza, Rodger Boka, Thomas Nherera, Davison Mugabe, Zabron Mushore, and Thomas Chingwaro among others.

Initially, it was registered as the Indigenous Commercial Farmers Union in 1996, but was later changed to the ZCFU, with a mandate to serve commercial farmers irrespective of the size of the farm.

To date, seven presidents have been on the helm of the organisation and these include Thomas Nherera, Teererai Mugabe, Davison Mugabe, Wilson Nyabonda, Donald Khumalo, Wonder Chabikwa and Makombe.

Plans for a US$5bn tobacco industry