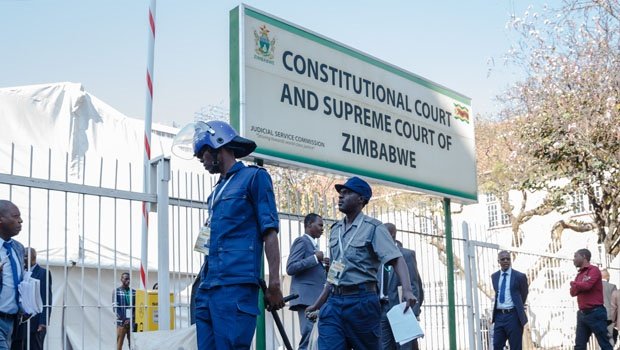 IN the Senate on 6 April, 77 senators were present, four of them virtually, according to the official attendance register. This exceptional turn-out was requested because of the scheduled Third Reading of the Constitution of Zimbabwe Amendment (No. 1) Bill, 2017.

Constitution of Zimbabwe Amendment (No. 1) Bill, 2017 – Third Reading
The minister of Justice, Legal and Parliamentary Affairs briefly outlined the reasons for the re-submission of this Bill for its Third Reading by the Senate nearly four years after the original Third Reading. [He was obliged to repeat his contribution because at first he had not been audible to all attending]. He mentioned the importance of a valid affirmative vote:
“I cannot reiterate enough what a legal and constitutional quagmire you honourable senators will help our country avoid if you secure the validity of the Constitution of Zimbabwe Amendment No. 1 Bill by your vote in the Senate today. You will be aware that already another amendment to the Constitution has been published and is pending before Parliament. The second amendment somewhat assumes the validity of the first amendment before you today”.

He was followed by several senators, all of whom spoke of the new mood of unity and harmony in the Senate. Senator Chief Charumbira reminded his colleagues that there had been three attempts during the previous session to “get the numbers right”, all of which had failed; he was sure that today the numbers would be right.

When the votes of senators were recorded, the result was 70 ayes to one no. The single no vote was cast by Senator Komichi of MDC-T. The President of the Senate then declared the Bill to have been duly passed in accordance with section 328(5) of the Constitution.

On 8 April, Parliament transmitted the Bill to the Government Printer for production of the printed version that will be submitted to the President for his assent and gazetting as an Act. The Act will be an Act of 2021.

But was the minister correct when he said this vote will avoid a legal and constitutional quagmire? Uncertainty persists, and a new constitutional point has been raised.

Uncertainty over Validity of Constitution Amendment (No.1) Bill
The Bill has now had a successful Third Reading and looks set to be regazetted as an Act of 2021 [see above]. But last week’s Third Reading by the Senate was the only aspect of this Bill that was dealt with by the present Parliament.

It was the previous Parliament that dealt with everything else and that previous Parliament came to the end of its constitutional life when it was dissolved immediately before the 30 July 2018 general election by operation of section 143(1) of the Constitution [‘Parliament stands dissolved at midnight on the day before the first polling day in the next general election”]. The interposition of this dissolution brings section 147 of the constitution into play: “147.

On the dissolution of Parliament, all proceedings pending at the time are terminated, and every Bill, motion, petition and other business lapses.”

Section 147 was not referred to in Chief Justice Luke Malaba’s Constitutional Court judgment of 31 March 2020 invalidating the first Third Reading in August – perhaps because it was not directly relevant at the time the case was argued before the court in January 2018, some six months before the dissolution of Parliament. But it was the main point raised in the Constitutional Court on behalf of legislator Innocent Gonese when resisting Parliament’s September 2020 application for an extension of the grace period allowed by the Chief Justice.

The reaction of the three Constitutional Court judges to section 147 varied.

Justice Gowora was in favour of refusing the extension because to do so would involve the court in a breach of section 147. Justices Makarau and Patel granted a 90-day extension but were both very conscious of the problems posed by section 147.

The judgments of Justices Makarau and Patel also carry warnings of potential legal trouble ahead in the event of a “successful” Third Reading vote:

Justice Makarau
While adamant that the court could not question the constitutionality/correctness of the court’s 31 March 2020 order in the application before it, Justice Makarau added: “Only this court can depart from its previous decisions, rulings or opinions. I venture to add for emphasis that only this Court, in a future and appropriate constitutional matter, may depart from its previous order” [bold text in the judgment] I take solace from the fact that the constitutionality of the order of 31 March 2020, whilst not debatable in this application, may be debated in an appropriate matter in the future, where the interpretation of section 147 of the Constitution is the cause of action. The order of 31 March 2020, whilst final, is not binding on this Court.”

Justice Patel
Justice Patel was more direct: “I am nevertheless constrained to caution that their (i.e., Parliament’s) success in this application does not constitute any licence for the applicants to violate the requirements of the Constitution or to disregard any of its provisions … anything done in contravention of the Constitution is a nullity.

Therefore, any act or conduct by the applicants in direct violation of the Constitution will remain a nullity, even if carried out purportedly in compliance with the order of this Court. Consequently, in the event that they decide to proceed with the Constitution Amendment Bill (No. 1), they would be obligated to do so, not only in accordance with the voting requirements prescribed in section 328 of the Constitution but also in conformity with any relevant and applicable constitutional injunction, including the legal ramifications of section147 of the Constitution.”
— Veritas.

Nothing to celebrate on Independence Day