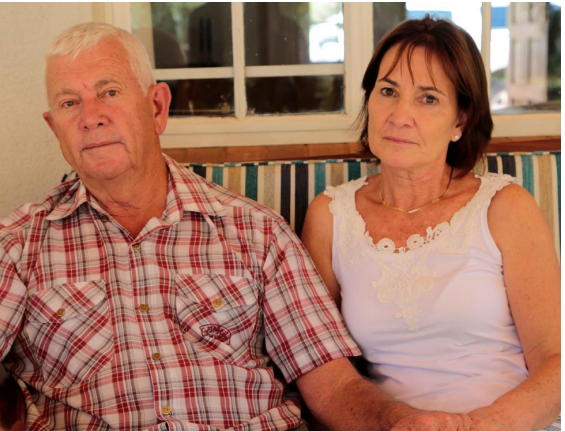 Martin Grobler and his wife Debbie

IT is 11am on a Friday mid-morning and Martin Grobler is sitting by the poolside, lonely gazing blankly at the generally cloudless azure sky, with streaks of cloud dotted across the cosmos above.

The gentle summer breeze blows across the expansive yard in Pomona, a leafy suburb north of Harare’s central business district; a welcome cooling effect in the sweltering heat. It has not rained that much of late despite recent showers that cooled the soil baked dry by the fierce heat of the sun. The oasis that the swimming is helps to
cool down the temperatures and Grobler’s emotional rollercoaster.

This is where the 63-year-old farmer and his wife, Debbie, have been staying after they were recently evicted from their farm in Ruwa by dozens of policemen acting on a Supreme Court order and at the behest of a politically connected civil servant.

Far from the farm life and its rustic simplicity, where Grobler was running a profitable business at Protea Valley Farm, he looks lost in the plush suburbs. Every morning, Grobler wanders about, looking for what his hands can do, his wife says with a sympathetic and touching tone.

“I am very concerned about him, he has taken it very hard,” says Debbie as she narrates the couple’s experiences after the eviction.

The 63-year-old third-generation Zimbabwean commercial farmer stammers as he recounts his ordeal.

“What will it achieve, if you write it in the papers? Nothing,” a visibly agitated Grobler says as he
appears poised to abruptly end the
interview.

All along, Grobler has been fine enjoying what he knows best- farming. But about a month ago, his life took a nasty turn. He was evicted from his farm in Ruwa by a dozen of police officers acting in the interest of Ivy Rupindi, a civil
servant in the Ministry of Agriculture.

The Groblers were originally leasing Protea Valley from the previous title deed owner and, with the owner’s approval, they applied for an offer letter from the government when the fast-track land reform began.

Although the offer letter was printed, they could not collect it after officials allegedly demanded a US$100 000 bribe.
Rupindi also applied for the same farm and received an offer letter.

Grobler told The NewsHawks in an interview that his offer letter had been conveniently removed from the records at the Ministry of Lands.

Now living on the benevolence of his sister-in-law, Grobler still believes he can at least find grazing land for his cattle.

Clad in typical farmer’s regalia comprising khaki shorts and shirt, he looks deep in thought as he begins to narrate his ordeal.

“We do not own a house in town. All our money is invested in the farm,” he said. In a hushed voice, the 63-yearold says he hoped he would have security at his farm following former President Robert Mugabe’s ouster in 2017 and President Emmerson Mnangagwa’s rise to power.

“I thought that when the new dispensation came this would come to an end. We were invited to Mashonaland East and the minister said congratulations, you have survived the land reform, it is now over. But it is not over, it depends on who is powerful enough to do what they want to do,” Grobler said. “So, let it be what it is.”

His wife threads into the conversation, saying: “They want people back on the land, but now they
are kicking people off that are producing.”

“But that has been ongoing. It doesn’t apply to the hierarchy, to the chefs. This lady is obviously very powerful and high up in government so she can do what she wants,” Grobler replies.

The two pause for a second before Grobler further recounts how he was evicted. “It was a shock to us, but we had to do what they wanted,” he said.

“We did not know and our lawyer said that it would never happen because it was still in the Supreme Court. So there was no court case or anything that had come about that the eviction was going to take place. We had no warning whatsoever,” Debbie weighs in.

The couple explains how two trucks, with police officers, arrived at their gate that morning in the company of Rupindi.

The officers used bolt cutters to open the storerooms, while the rest moved the property out of the Groblers’ farmhouse.

Debbie explains how she begged Rupindi for two days to enable her to pack properly. “She said no, you are out today,”

Debbie adds with a teary voice. “When you’ve been in a place for 22 years, you can’t move out in an afternoon. So, I pleaded with her. I said please give me two days. She refused.”

By 3:30pm the following day, the Grobler family finally moved out of their home. With nowhere to go, a well-wisher offered to keep their property in a shed in Ruwa before they moved in with Debbie’s sister.

The 63-year-old is not pursuing legal action against his evictors. “We realise these people are too powerful. So, we are not pursuing anything to try and get the farm back,” Grobler said.

He however said he desperately needs land for his 250 head of cattle. Grobler’s eviction happened after the government announced a plan to compensate former white farmers, while allowing some commercial farmers, who lost land, to apply for their land.

The government says this would boost the agriculture sector which has been in chaos since the violent land seizures in 2000 by Mugabe’s government.

Since the chaotic land reform programme, Zimbabwe, once the breadbasket of Southern Africa, is now heavily reliant on grain imports and donor aid for survival.

After assuming power through a military coup, Mnangagwa first appeared progressive, but continued land seizures, corruption and human rights violations have intensified under his watch.

“We were very relieved that all our troubles would be over and especially that we would be secure on the land. But we have lost it all,” Grobler said.

Grobler says he lost US$400 000 of investment into a tobacco curing plant, crops valued at US$600
000 and irrigation equipment estimated at more than US$70 000 as a result of the eviction.

Grobler said he has forgiven his evictors and looks to God for his next move. “So we just forgive them and
move on. So many other farmers have had to do the same thing,” he said.

He is also contemplating relocating to another country with his cattle and farm equipment if the government does not give him land for his cattle. Many Zimbabwean farmers left for countries like South Africa, Zambia, Mozambique and Nigeria to farm.

Some gave up farming and went to South Africa, Britain, Australia, Canada and New Zealand, among
other countries.

“I need to find a place for my capital and there is no way I can move them to a place if it’s not secure. If I don’t get a 99-year lease, this thing will happen again. I have to be secure on the land in order to
farm,” Grobler said.

Let’s not normalise the abnormal