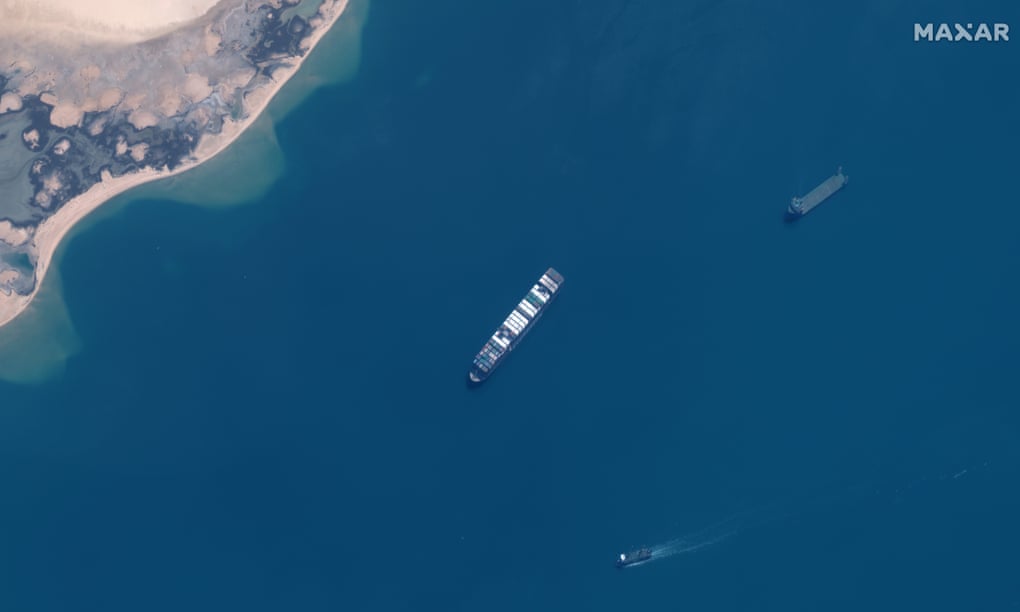 LEMONS, bamboo shoots and tofu sit in the sweltering heat, alongside goods from Lenovo, Ikea, Dixons Carphone and dozens of other brands – including barbecues, sun loungers, swimwear, lawnmowers and camping equipment – and will arrive at their intended destinations long after summer ends.

Since the successful operation to dislodge the 220,000-ton Ever Given from the Suez canal, where it was stuck for six days, the cargo ship has been grounded again – this time by a fierce legal battle between the ship’s owners, insurance companies, and the Suez Canal Authority (SCA).

In late April, Egypt declared that authorities were detaining the ship, her 26-person crew and millions of pounds in cargo, until its owners paid compensation for the blockage.

The ship is unable to sail out of Egyptian waters until the problem is resolved. “We’re frustrated. Some of our clients are outraged,” said Jai Sharma of the insurance company Clyde & Co, which represents producers of more than US$100m worth of cargo onboard the Ever Given. Although the cargo remains officially detained, physically removing it from the gigantic ship is unlikely to become an option as it requires equally gigantic cranes to move it, at a port deep enough to accommodate such a large vessel.

Dixons Carphone, the Chinese technology manufacturer Lenovo and Ikea separately confirmed that their products remained trapped on the ship.

“A small number of our containers remain on the Ever Given vessel, however there is no meaningful disruption to our stock levels or business operations,” said a Dixons Carphone spokesperson. Some retailers are considering legal action against the Egyptian authorities to try to free their cargo. “We’re exploring ways to recover the goods,” said Charlotte West of Lenovo, but declined to give details.

The battle hinges on a legal fight over compensation, due to return to court in the Egyptian port city of Ismailia later this month. The SCA said it was seeking US$916m from the Ever Given’s owners, Shoei Kisen, and their insurers, the UK P&I Club, including some salvage costs borne by cargo insurers.

While the SCA has since said it is prepared to accept a settlement of US$550m, it is yet to provide information to explain its colossal demand, other than listing US$300m for a “salvage bonus” and a further US$300m for “loss of reputation” and physical damage to the canal. Egyptian authorities quietly revealed at the end of May that one person died during the salvage effort.

“Even US$550m is untenable,” said Sharma. “My impression is that the whole claim is inflated.” Clyde & Co drew particular issue with the size of the salvage bonus. “The SCA said early on with great fanfare that 800 Egyptians worked for six days to salvage the vessel – US$300m spread across 800 people for six days’ work is a generous pay package, it’s hard to think of how this makes any sense,” said Sharma.

“The SCA has not provided a detailed justification for this extraordinarily large claim,” the UK P&I Club said in April. “The vessel was refloated after six days and the Suez canal promptly resumed their commercial operations.”

Observers remain confused as to why the SCA has pressed for compensation for damage to its reputation while continuing to impound the ship, crew and cargo, causing further harm to global supply chains. “In many ways this incident was an opportunity for Egypt to shine,” said Dustin Eno of the UK P&I Club.

“The UK P&I Club acknowledged that the SCA assisted with salvage, and was successful within six days. This was a great outcome that Egyptians should be proud of, it brought a lot of attention to the Suez canal, and to its tremendous contribution to global trade. I struggle to see why they think their reputation was harmed.”

Clyde & Co wrote to the SCA in May, pleading with it to take into consideration the fact that some goods onboarded risk expiring, going out of season, or becoming otherwise unsellable as delays dragged on. Expired goods could create a “significant disposal problem”, Clyde & Co added.

“It is our view that if the SCA is reported to be refusing to release time-sensitive cargoes during a global pandemic, such an approach could cause serious reputational harm to the SCA.” Clyde & Co said it had not received a response.

There is still little agreement on what caused the ship to ground. Strong winds and low visibility due to a sandstorm were initially raised as the likely cause, but disputes remain over why the SCA allowed the Ever Given to enter the waterway if the weather put vessels at risk.

The head of the SCA’s investigation committee into the incident, El-Sayed Sheisha, told reporters the Ever Given was speeding and swerved, and blamed the ship’s captain. The SCA mandates that two canal pilots remain onboard ships this size, taking control to allow them to navigate the slim waterway, but canal rules hold third parties responsible for any damage caused.

The UK P&I club said it was “concerned” by the SCA’s claims against the ship’s captain, including that he was speeding. The speed of ships crossing the waterway is normally regulated as they travel in a convoy.

“While the master is ultimately responsible for the vessel, navigation in the canal transit within a convoy is controlled by the Suez canal pilots and SCA vessel traffic management services. Such controls include the speed of the transit and the availability of escort tugs,” the UK P&I club said.

The SCA’s chairman, Osama Rabie, said the Egyptian authorities intended to expand an 18-mile stretch of the canal south of the Great Bitter Lake where the Ever Given ran aground in March. Meanwhile, negotiations continue to free the Ever Given, her crew and cargo all over again.—The Guardian.