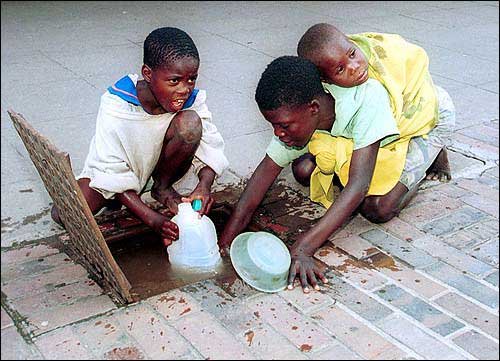 SEVENTEEN-YEAR-OLD Vimbai Chabaiwa* trudges along the streets of Harare with a baby strapped on her back as she begs for her next meal. Traffic lights and the nearby Africa Unity Square are her daily hunting grounds as she begs for alms.

While some passersby and motorists are kind enough to lend a helping hand, others look at her with utter disdain. Chabaiwa’s five-month-old baby is her daily companion, but his constant cries are a stark reminder of the day a man forced himself on her.

On a good day she makes ZW$400, which often comes with a painful exchange. Chabaiwa narrates a tear-jerking story of how she was sexually abused by several men who took advantage of her desperation.

As a result of several encounters with abusive men, Chabaiwa is unsure about the paternity of her baby. Her life took a nasty turn after an unidentified man asked for sexual favours in exchange for money. In desperation, she obliged.

‘‘I have no idea of who the actual father of the child is as l have been having some encounters with some men who demand sex for helping me. It’s not something that I want. I hate it but sometimes desperation and hunger force you to do these things,” Chabaiwa said.

“As tough as my life is, I still get up every morning going down the same road trying to provide for my baby. I now have a baby whom I need to provide for in addition to my grandmother.” Chabaiwa knows about the dangers of having unprotected sex and fears she may have contracted HIV from the sexual encounters with random “benefactors”.

“I don’t even know if l have not contracted HIV because some of the time, they sleep with me without using protection. They actually refuse even if I insist and, out of desperation, I give in,” Chabaiwa said.

Harare’s central business district has become a begging area for struggling families from Epworth and other poor townships around the capital.

At almost every traffic light, street children, blind parents with their guides and teenage mothers can be seen begging for alms daily. While others offer to wash car windscreens, others sell sweets to earn a living. It is apparent that the number of beggars has risen over the years as the economy continues to crumble due to misgovernance.

In desperation they walk to town daily to beg, testimony to the economic challenges bedevilling families and individuals. Paida Chinoda* is already a bread winner at the age of 14.

As if taking care of a stepmother suffering from a heart disease is not painful enough for the teenager, she has to shoulder the burden of eking out a living for her family. Chinoda has been deprived of her childhood and has to beg for her school fees. Most school-going beggars are forced to balance school with street begging.

Like Chabaiwa, she has been a victim of sexual abuse on the streets of Harare. ‘‘I stay with my stepmother, she has not been able to work due to her heart condition which forced me to stand up and provide for the family. I’m surviving on foodstuffs and a few dollars that l get from begging from people. The sad part of begging is that some men are taking advantage of our situation, they demand sex in return. I also have to look for my school fees. During the week days, l come to town after school, begging from people so that l will get either money or food. If I stay home, it means the whole family goes hungry,’’ Chinoda told The NewsHawks.

While abuse continues to happen daily, such cases go unreported due to lack of evidence as the perpetrators disappear into thin air. Mercy Mamvura* (12) also recounted her ordeal on the streets of Harare. Mamvura, who stays with her grandmother, does not know her biological parents and is forced by poverty to beg for her next meal.

‘‘I came here begging for school fees money and per day l usually get ZW$200. It’s not enough for me to pay my school fees, pay rent, and pay for food. Some people ask you first what you offer them before they give you money. We are facing verbal and sexual abuse when we are begging in the streets. As an orphan l don’t have any option except for begging from people in the streets,’’ Mamvura said.

But until fortunes change for these girls, they will continue begging on the streets and the abuse is likely to continue unabated if the authorities do not move decisively to protect them. * Names have been changed to protect their identity.

Girls must be supported to achieve their potential — UK ambassador

Rushwaya emerges in the thick of shady Zim military dealings