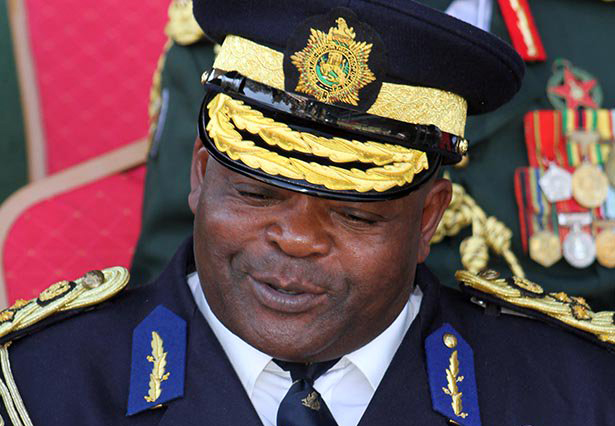 POLICE Commissioner-General Godwin Matanga (pictured) and Home Affairs minister Kazembe Kazembe have been sued over their arbitrary ban on a demonstration against the looting of diamonds in Marange and failure by the government to fulfil promises made to relocated families now stranded at Arda Transau.

The case number is 1175/22. Filed by Chiadzwa Community Development Trust (CCDT) chairperson Newman Chiadzwa at Mutare provincial magistrates’ court on Wednesday this week, the lawsuit seeks an interdict on the ban on a planned praceful protest by civil society organisations.

He is being represented by the Zimbabwe Lawyers for Human Rights (ZLHR) led by Kelvin Kabaya while Mutare provincial magistrate Xavier Chipato is presiding over the matter. Matanga and Kazembe are cited as second and third respondents in the matter.

Chief Superintendent P. Mbira, who is the regulatory authority for Mutare Rural District and is the one who wrote a letter to Chiadzwa banning the demonstration that had been scheduled for 15 November this year, is cited as first respondent. In his founding affidavit, Chiadzwa said it was wrong for the police top brass to ban the 15 November demonstration that had been organised by him and eight other civil society organisations in Marange.

“I wish to state that it cannot be gainsaid that there is a clear impression that 1st Respondent seeks to prevent me from holding the intended demonstration together with other participants. The reasons put forward by the 1st Respondent to prohibit the intended demonstration are not cogent and are a clear misinterpretation and misapplication of the law.”

“I must point out that I only desire to enjoy the rights that are enshrined in the Constitution and peacefully so. I further wish to highlight Section 10 (1) (c) of the Maintenance of Order & Peace Act relied upon by the 1st Respondent cannot be read in isolation. Sub-section 2 of the same Section is clear.”

“Sub-section 1 of Section 10 does not apply to gatherings for which seven days prior notice has been given to the Regulatory Authority and in this case, the 1st Respondent. I humbly submit that 1st Respondent has clearly misinterpreted the law.”

“I further wish to aver that, the second ground for prohibiting the demonstration is equally without any merit. It cannot be a ground for the Regulatory Authority to state that he cannot guarantee the conduct and behaviour of those who will be demonstrating,” said Chiadzwa adding: “I must hasten to point out that 1st Respondent has no power in terms of the Maintenance of Peace & Order Act to declare any notice given to him as invalid. The spirit of the Act is to fully facilitate the enjoyment of the rights in question and not to have them stifled by undue formalistic and technical requirements as sought to be done by the 1st Respondent in this matter.”

Chiadzwa also said in the affidavit that it could not have been the purpose of the Protected Places and Areas Act to completely prohibit the exercise of constitutionally guaranteed rights in protected places or areas.

He pointed out that it would appear to him that, the police’s reason for prohibiting the demonstration is simply because it is to be convened in a protected area, yet that is not enough grounds to limit the right to protest and petition as provided for under section 59 of the constitution of Zimbabwe.

“I respectfully submit that, consequent upon the submissions in the preceding paragraphs, the prohibition notice issued by the 1st Respondent on the 9th of November 2022 is of no force or effect and therefore ought to be set aside.”

“I submit that I have no other alternative remedy available to me apart from approaching this Honourable Court and have the Respondents interdicted from interfering with the intended demonstration.”

In recent days, there have been attempts by the intelligence apparatus in Marange to divide the CSOs that are pushing to hold the demonstration through posting of fake news on social media claiming non-existent fights among the organisations.

CRD director James Mupfumi, who has been a target of the sting operations by the Central Intelligence Organisation (CIO), confirmed the development but vowed that the CSOs will not budge.

“The people of Marange will defend their right to peaceful demonstration in the courts from Monday next week. No amount of character assassination on myself and other CSO leaders as falsely carried out in an online voice article will distract unity in the movement in demanding socio-economic justice in Marange. The article is yet another attempt by state security forces to divert world attention from government heavy handedness on the demand for accountability in Marange diamond mining,” he said.

Chiadzwa in the court papers said he would suffer irreparable harm to his fundamental human rights if the demonstration is prohibited as being contemplated by the Mbira, Matanga and Kazembe since there will be no adequate compensation to the curtailment of his aforementioned rights.

“The matter is urgent and cannot wait any longer than is necessary. I require immediate relief to avert the likely dire consequences to be caused by the Respondents’ conduct. I submit that I did not wait to approach the Courts as soon as I received the prohibition notice from the 1st Respondent. The intended demonstration is only a few days away,” he further says.

Zimbabwe Lawyers for Human Rights (ZLHR) spokesperson Kumbirai Mafunda told The NewsHawks that the matter was deferred to Tuesday next week by the magistrate where Mbira, Matanga, Kazembe and the other concerned parties will file their heads of argument.

“Basically the application is to stop the police from interfering in a demonstration over non-remittance of funds from the Chiadzwa Community Ownership Scheme. The Chiadzwa community is also aggrieved with the fact that it is not benefiting from the proceeds of diamond mining in the area. So they approached the ZLHR after their letters of notification to hold the demonstration were turned down by the police,” he said.

A United States-based non-profit conservation and environmental science organisation, Mongabay, recently revealed fresh details into the deepening poverty that is engulfing relocated communities in Marange, 14 years after locals were promised homes, electricity, water, water, employment, social services, as well as compensation by the government working with diamond-mining companies in the area.

The organisation, which made a follow-up investigation to its findings on the situation that obtained in Marange in 2016, revealed in its latest report that the affected villagers, who were relocated to pave way for the diamond mining, are yet to enjoy the benefits of the discovery of the gems in their backyards.

Companies reneged on a promise to pay US$10 million each into the Chiadzwa community trust, a sore point among the grievances which prompted the demonstration.

They are Marange Resources, Anjin Mining Investments, Jinan Mining, Mbada Diamonds, and the Lebanese private company Diamond Mining Corporation. The government has also failed to honour pledges to relocated families who moved into Arda Transau to allow the mining of gems by these companies in their ancestral land which is fuelling anger among the villagers that now want to hold the demonstration organised by Chiadzwa and his partners.

The pledges included jobs in the mines, three-bedroom homes, electricity, running water, tarred roads, half a hectare (about 1.2 acres) of land with irrigation systems, schools, a clinic, seeds, fertilizer and food delivery every three months.

The families, previously farmers and dependent on the land for their livestock, were also promised assistance to initiate piggery projects. The late president Robert Mugabe in one of his interviews said US$15 billion diamonds were looted in Marange.

Although the amount was later queried, the looting of Chiadzwa diamonds and mineral proceeds has cost Zimbabwe immensely.