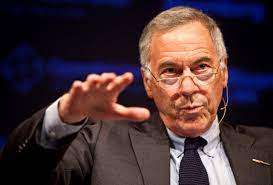 “ZIMBABWE’S currency is in a death spiral. Now, the corrupt government is threatening to suspend all businesses using black market exchange rates to price goods. I’ve seen this movie before. It has a tragic ending.” — American applied economics and currency expert Professor Steve Hanke (pictured).

Indeed, Zimbabwe’s foreign exchange market volatility has intensified with the local currency now quoted at US$1:ZW$90.07 in the formal market and over US$1:ZW$170 in the parallel market, hence Hanke’s damning remark.

The Reserve Bank of Zimbabwe (RBZ) has been battling currency instability since the reintroduction of the Zimbabwe dollar on 24 June 2019.

Zimbabwe had abandoned its own dollar in 2009 after years of hyperinflation had destroyed trust and confidence in the local unit.

The United States dominated the market until 2016 when bond notes were introduced. Prior to that bond coins had been introduced in 2014 purportedly to facilitate change in transactions.

Since the reintroduction of Zimbabwe dollar in 2019, the RBZ has revised the monetary policy framework several times in an attempt to address the high inflation rate and manage limited currency reserves, often in a haphazard and unpredictable manner.

To date, none of these interventions has been successful in a sustainable way. Limited reserves and low confidence in the Zimbabwean unit, alongside the persistent demand for foreign currency by both business and individuals continue to fuel growth of the parallel market, resulting in the ongoing erosion of the value of the local unit bordering on a currency crisis.

The process leading to the Zimdollar’s reintroduction dates back to October 2018 through January and February 2019 until June the same year.

Within a few days, after the establishment of the auction system, on 26 June 2020, the government banned all mobile phone-based payments, citing the need to address “economic sabotage”.

Mobile money payments account for around 84.8% of all transaction volumes in the country, according to the RBZ, following long-term cash shortages at banks.

“The introduction of the Dutch foreign exchange auction system has so far achieved its key objective of price stability and has greatly assisted in creating transparency in the management of foreign exchange and in price discovery of the market exchange rate. This has restrained the speculative pass-through effects of the exchange rate on the pricing of goods and services in the economy,” Mangudya said in his 2020 monetary policy statement.

“Sustaining the auction system is therefore crucial in fostering price stability in the economy.”

Mangudya, however, acknowledged the limitations of the auction. He said while the RBZ was encouraged by the fact that some business entities realigned their pricing models to the auction-determined exchange rate, other entities were not complying and charging for goods and services at rates higher than the auction rate despite accessing foreign currency officially.

Such practice, the forward pricing of the exchange rate, went against the positive outlook on the exchange rate which the RBZ hoped would lead to convergence as evidenced by the continued narrowing of the bands between the highest and lowest foreign currency bids, and the reduction in the parallel exchange rate premium to below 15% at the time.

Closure of the Zimbabwe Stock Exchange (ZSE) followed on 30 June 2020 with government shutting down trading on the official stock exchange with immediate effect. The ban remained in place for over a month, resuming on 3 August 2020.

The government stated there was a link between the movement in prices of these three dual-listed stocks and the climbing parallel market rate of the Zimbabwe dollar (estimated at between ZW$75 and ZW$95 to US$1 then). These companies were excluded from trading on the ZSE when it re-opened on 3 August and remain suspended.

Currently, the government has launched a crackdown on currency traders and is threatening to revoke licences of businesses that peg their prices to parallel market rates in a desperate bid to control the galloping exchange rate. Blaming businesses for currency instability and suspending their operations appear to go beyond the stated aim of restoring economic instability, but finding a scapegoat and politics.

To note, the increasingly repressive stance adopted by the government in recent months reflects growing political pressure it is facing in the wake of these challenges and the fear of an exchange rate-driven economic meltdown, and political consequences thereof.

This is, however, not new as Zimbabwe has a chequered history as far as managing the exchange rate is concerned.

From Independence in 1980 to date, Zimbabwe has always attempted to maintain a fixed exchange rate (through the peg to the US dollar) which is inconsistent with its macro-economic fundamentals. The exchange rate always becomes increasingly overvalued — relative to Zimbabwe’s reserves and international competitiveness — leading to balance-of-payments problems, shortages of foreign currency, and the emergence of the parallel market.

This long-term problem is compounded by the rapid expansion of money supply through fiscal deficits and the RBZ’s quasi-fiscal activities.

It is clear Zimbabwe’s problem is that it runs a substantial current account deficit, but does not benefit from inflows of foreign direct investment (FDI) as that continues to be discouraged by high political and economic risk.

The country does not have access to international capital markets for borrowing mainly due to outstanding arrears on outstanding debt, while official foreign exchange reserves are largely depleted. Without access to foreign currency from trade or capital inflows, the supply of US dollars in the economy in general and the banking system in particular is highly constrained.

Zimbabwe’s major sources of foreign currency are exports, lines of credit, loans and diaspora remittances, among others.

At the same time, the government has been running fiscal deficits funded by the creation of RTGS dollars by the RBZ. With a shortage of US dollars, and the creation of RTGS dollars, it was inevitable that the RTGS dollar would depreciate faster. The official rate does not tell the true story as it is being managed. Essentially, the government has never followed the golden rule that money supply must solely be driven by balance-of-payments.

The government should consider ending the taxation of exporters (through compulsory currency surrender requirements) and gradually reduce subsidisation of imports which are essential in stabilising the balance-of-payments, hence the exchange rate. Improving transparency in the allocation of foreign exchange and unifying the foreign exchange market are also critical. The latter would end the distinction between the official market and the parallel market, and would so end the profits that rent-seekers with privileged access to foreign exchange can earn through ‘round tripping’.

The RBZ must be strengthened by giving it policy independence, ending “fiscal dominance” (forcing it to lend money to the government to finance fiscal deficits), improving the quality of data required for the implementation of monetary policy, and dramatically enhancing transparency relating to fiscal, monetary and foreign exchange transactions.

It is by no means clear that Zimbabwe will be in a position to stabilise the local currency anytime soon. As such, the dominance of foreign currency when transacting will remain, but the US dollar is probably not the most appropriate foreign currency for Zimbabwe.

From the country’s experience on currency and foreign exchange rate, it is clear that there is no escape from the laws of economics. Large budget deficits are always unsustainable, and, if financed by printing money, will result in inflation and currency depreciation.

Furthermore, if the economic fundamentals are weak, then the choice of currency regime is irrelevant as both dollarisation and a local currency will fail, regardless.

Zimbabwe, just like any developing country, is dependent on capital inflows which, in turn, need a positive business environment (for inflows of FDI) and debt restructuring as Zimbabwe’s debt is unsustainably high. Both need positive engagement with the international community. Without capital inflows or substantial export growth, the balance-of-payments will be unsustainable. This will cause either currency weakness or economic contraction.

It is also clear that the central bank’s numerous changes to monetary policy over the past few years indicate its ongoing inability to strengthen the local currency and reduce hyperinflation.
Meanwhile, its targeting of private businesses signals that it is seeking to scapegoat external actors for macro-economic and policy challenges. This was pointed out by business this week.

Businesses, however, will face an increasingly hostile environment for their operations amid growing uncertainty around the security of their investments.

From a political economy perspective, the absence of these conditions hinders long-term economic growth, but in the short term creates incentives and opportunities for rent seeking and corruption.

Command economics and control policies promote rent-seeking behaviour and breeds corruption. The current policies being implemented by the government will not contain the parallel market, but make its activities more brisk. Only with a shift from a short-term to a long-term perspective will the policy environment improve and the parallel market subside.

Kaduwo is a researcher and economist.