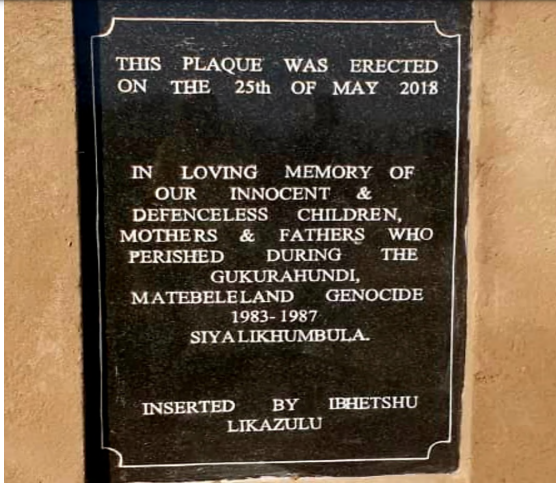 On 18 October 2022, President Emmerson Mnangagwa launched a manual on Gukurahundi community engagement process of chiefs together with the report on consultative meetings on the Gukurahundi “issue”.

Accordingly, as expected both these documents have ignited fierce and competing reactions and commentary from disparate sections of Zimbabweans and across both sides of the political spectrum. Consequently, this opinion piece attempts to provide both a discursive and deconstructive critique of the 22-page consultative meetings on Gukurahundi “issue” (the report).

Therefore, I will argue, that ipso facto, the chiefs` report – notwithstanding the fact that it attempts to provide the traditional leaders with a road-map towards resolving Gukurahundi “issues” – is punctuated with some deeply concerning legal blind spots and considerable and deliberative omissions.

That will undoubtedly call into question the sincerity, the political will and seriousness of the government of Zimbabwe to resolve what it euphemistically defines as Gukurahundi “issue”, which nonetheless satisfied the international criminal law thresholds of the crime of genocide, war crimes and crimes against humanity.

Thus, I will further argue that the chiefs’ report is reductive and minimalistic in nature and it will be incapable for laying out a clear  roadmap towards far-reaching transformative justice for both the survivors and victims of the Gukurahundi genocide.

Performance of injustice and spectacle of legalities

That is, it is reductive and minimalistic in nature, in that Gukurahundi is trivialised and reduced to a mere footnote of being an “issue” rather than being classified as a genocide. Accordingly, on this 22-page chiefs’ report the term genocide was mentioned only once on page 11 as a mere asterisk rather than being emphasis as the major highlight and raison d’être of the report.

Prima facie, the chiefs’ report immediately raises eyebrows to any serious observer, critic or reader in the sense that neither the front page nor the back page contains reference sections that must have contained various historical documents which are essential in informing or providing a historical basis for the chiefs’ report. There were no reference sections that acknowledged invaluable historical Gukurahundi documents such as the classified  Chihambakwe   commission report, the Catholic Commission on Justice and Peace report titled Breaking the Silence and the 1987 Unity Accord document.

These three documents are crucial in providing a historical foundation for interrogating any real or perceived redress for Gukurahundi genocidal and ethnocidal crimes. Another crucial element to critique into this report is the human factor and element of it, that is the chiefs who have been tasked with resolving the so-called Gukurahundi “issues”.

Coupled with the fact that, chiefs are beneficiaries of the Zanu PF government’s patronage and crony-clientelism system and have historically acted as the defacto political commissars of Zanu PF during election season.

As such, this calls into further question the integrity and independence of the chiefs in dispensing far-reaching and transformative decisions in resolving Gukurahundi grievances.  we must question whether the chiefs can be the impartial arbiters in this highly emotive and divisive matter of the Gukurahundi genocide.

However, the report highlighted the fact that chiefs will derive their authority in resolving Gukurahundi “issues” from section 281 of the 2013 constitution of Zimbabwe. Nonetheless, section 281 does not go far enough in terms of empowering chiefs in administering community-level non-prosecutory-based restorative or reparative justice for the victims of state-sanctioned crimes against humanity or genocidal crimes.

That would have express and legal provisions providing proper terms and provisions that specifically address both prosecutory and non-prosecutory transitional justice mechanisms for the survivors and victims of Gukurahundi.

Such legislative instrument would have provided effective guardrails for the provision of reparative, restorative and retributive justice for Gukurahundi victims and survivors. Therefore, by having a chiefs’ consultative meeting report without a Gukurahundi Act is akin to the Zanu PF government putting cart before the horse.

Additionally, another concerning aspect of this chiefs’ report which again casts doubt on the sincerity of the Zanu PF government in providing effective reparative, restorative and corrective measures for the Gukurahundi survivors and victims is the single mention of the term justice.

Thus, in its 22- page report the term justice was mentioned only once, that is on page 10 – again as a mere footnote rather as a major highlight of the report. Consequently, this de-emphasising of justice in this report casts doubt on whether the chiefs under instruction from the Zanu PF government have the political will to robustly disseminate restorative nor reparative justice for the Gukurahundi survivors and victims. The report also emphasises that the process of redressing Gukurahundi historical grievances is going to be purely locally driven and, as such that, neither foreigners nor foreign theories will be involved.

Furthermore, Chief Fortune Charumbira on page 21 illustrates that an international commission of enquiry is unnecessary.  However, at face value this proposition sounds logical and useful, it sought to reinforce the ethos of “African solutions to African problems”, which is quite commendable.

However, this approach in terms of comprehensively addressing Gukurahundi is insular and quite exclusionary. Thus, it negates and downplays the fact that tge Gukurahundi genocide had international dynamics to it. For instance, the former South African apartheid government was heavily invested in the Gukurahundi genocide.

North Korea actively trained and armed the crack 5 Brigade military unit and the roles of the United Kingdom government and the international community need to be interrogated. In particular, the deafening silence and condonation of the authoritarian excesses of the Robert Mugabe government during the height of the Gukurahundi terror and genocide are matters of interest.

Also, the decision by the Zanu PF government to side-step the international community in resolving the historical genocidal injustices of Gukurahundi is not based on the principle or belief that Zimbabwe has indigenous legal and institutional frameworks to appropriately and methodically deal with Gukurahundi grievances and injustices.

However, it has more to do with the desire to circumvent and avoid potential international legal, punitive and prosecutorial ramifications on some of the chief architects of Gukurahundi genocide.

However, to a certain extent any potential transitional justice mechanisms aimed at addressing the Gukurahundi genocide needs to be internationalised.

That is, the domestic process needs to borrow extensively from other foreign jurisdictions that have effectively conducted and institutionalised transitional justice mechanisms within their polities. This is largely due to the fact that Zimbabwe has no judicial and political experiences in conducting such a process.

Therefore, it will be rational for the government of Zimbabwe to consult and engage countries such as South Africa, which carried out arguably one of the most successful reparative and restorative transitional justice mechanisms, the Truth Reconciliation Commission.  Since, the Zanu PF government has over the past three years has cultivated a political and diplomatic bromance with Rwanda.

Therefore, it would have been pragmatic for it to consult and engage widely with the government of President Paul Kagame on how it managed to successfully institute transitional justice mechanisms. Another deeply concerning aspect of this report is the issue to do mainly with the apology. Thus, it has been highlighted that the Zanu PF government is comfortable with acknowledging the Gukurahundi “issues”.

However, it is deeply uncomfortable with apologising for the same issues. It also reports that if the apologies are to come through, they have to be done by the chiefs on behalf of the government.

That is, the Zanu PF government and the chief perpetrators of Gukurahundi are outsourcing their responsibilities to apologies to the victims and survivors of Gukurahundi to the chiefs. Archbishop Emeritus Desmond Tutu once famously said: “There is no future without forgiveness”.  Consequently, the lack of an apology from the government deeply brings into question the authorities’ sincerity and their political will to effectively redress these grievances. Moreover, the reason why the Zanu PF government and its leadership are side-stepping the issue of apology is because they fear that issuing an apology for their Gukurahundi commissions and omissions might open the floodgates of litigation from the victims and survivors. The report talks about construction of memorials, which are part and parcel of symbolic justice for the victims and the survivors of the Gukurahundi genocide.

On page 14 it says: “The President has opened up the space for people to freely grieve their loved as part of the process to find closure”. Nevertheless, this statement is far removed from reality. Over the past two years, three Gukurahundi memorials at Bhalagwe in Matabeleland South province have been desecrated and destroyed at times through the deployment of military-grade explosives.

However, on all these three separate occasions the memorials have been destroyed, no concerted effort was made by the state to apprehend the perpetrators. Suffice it to say that the chiefs’ consultative report, which aims to provide a roadmap towards some form of community-driven non-trial-based transitional justice, has been made untenable by the fact that transitional justice mechanisms have by their very nature been conducted by post-genocidal regimes, post-autocratic regimes and post-perpetrator regimes.

That is, it is unprecedented in the historiography of transitional justice mechanisms that the perpetrators preside and institute those mechanisms. For instance, if you look at the Rwandan example it was the post-genocidal regime of President Paul Kagame in conjunction with the international community that instituted transitional justice for the victims and survivors of the 1994 genocide against the Tutsi people.

The same applies to the post-genocidal Khmer Rouge of Cambodia, who presided over transitional justice for the genocidal victims of Pol Pot.

Therefore, the Zanu PF government is involved in cakeism, whereby it wants to have its cake and eat it at the same time. However, there is another school of thought which argues that, notwithstanding the faults and the pitfalls within this, nonetheless to a certain degree it is a commendable step that the Zanu PF government, albeit belatedly, is now openly discussing the Gukurahundi genocide.

The Gukurahundi genocide is no longer a taboo topic and, as such, the government has decriminalised the topic.

Also important to note is that the report, despite its imperfections, is a good starting point for redressing the historical grievances of Gukurahundi genocide. It provides some low hanging fruits such as the issuance of birth certificates to the victims and survivors.

There is also the provision of exhumations and burials of the victims and possibilities of psychosocial therapeutic relief for the survivors through sharing and opening up of their repressed pain, trauma and memories of Gukurahundi, among other issues.

Notwithstanding the fact that the Zanu PF government is belatedly and grudgingly opening up the discussions and debates around the emotive, traumatic and painful aspects of Gukurahundi genocide, new steps such as the Report on the Consultative Meetings on Gukurahundi Issues by the Chiefs from predominately Matabeleland regions are worth noting.

This initiative – despite some considerable positives such as provisions of birth certificates to the survivors and exuhimations and reburials of the victims – is still plagued with serious and concerning issues that have the potential of defeating the whole process of redressing Gukurahundi historical genocidal grievances.