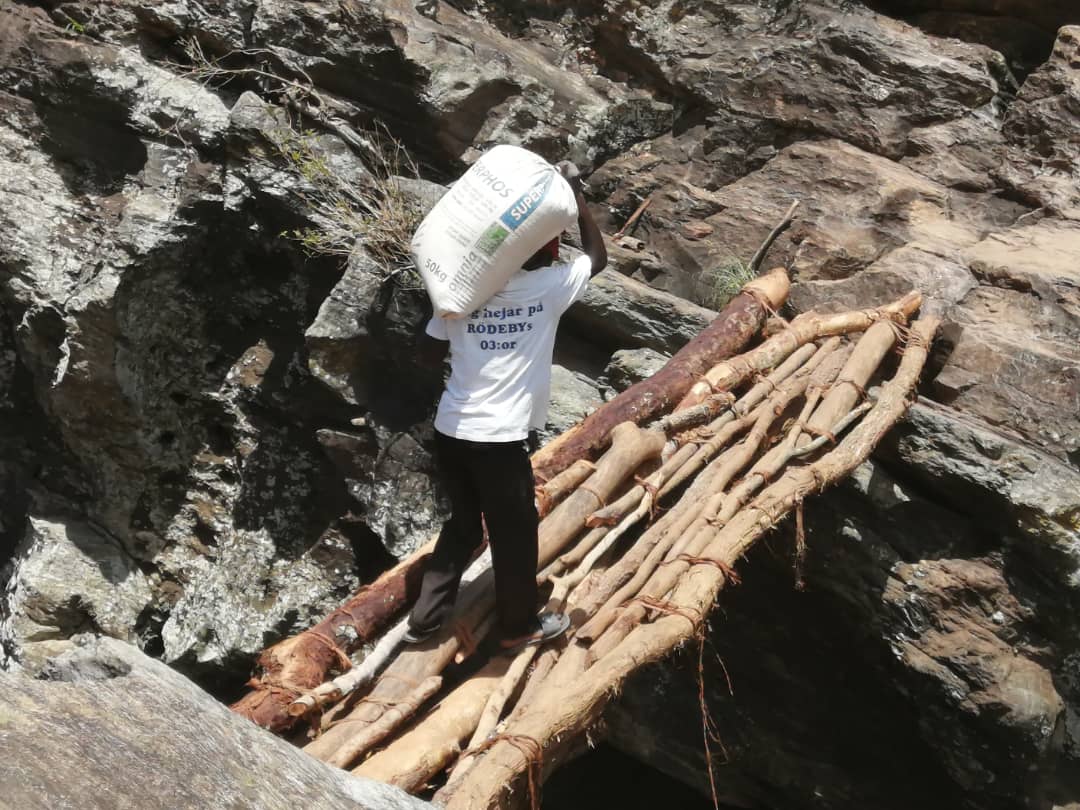 A villager from Nyachigo Village in Mozambique crosses a log foot bridge along Gairezi River carrying a sack of mealie meal. People from Nyachigo use grinding mills and shop at Nyamaropa Business Centre while some Zimbabweans do their bulk shopping in Katandika, Mozambique.

HEALTH and administration authorities in Nyanga, a district which shares a border with Mozambique, are at pains as to how to deal with the Covid-19 pandemic should it hit the border area, given the family ties and close interactions between people of the two countries as well as unregulated movement across the border, minutes show.

OWEN GAGARE
There is no official border post between the two countries in Nyanga although Gairezi River divides the two countries, separating a cultural community which has interacted for generations. A recent visit to Nyamaropa in Zimbabwe and Nyachigo in Mozambique — which are divided by the river — revealed that people from the two villages across the border regard themselves as one and interact daily, making it easy to transmit Covid-19 between the two countries.

Villagers in Nyamaropa and Nyachigo told The NewsHawks that they are one people before colonial borders divided them.

An official from Nyanga said a team comprising stakeholders from the district had engaged the community with the help of a community-based organisation operating in the area, to find ways of containing the virus should it hit the border community.

“We have been engaging the community because our border with Mozambique is very porous. Our situation is made worse by the fact that the community throughout the stretch of Gairezi River is related and very close to each other. On a daily basis, we have many people crossing into Mozambique from Zimbabwe and vice versa either for shopping or to spend time with relatives,” the official said.

“Even from the meetings we have held, it’s clear that we can’t stop the movement of people because the community is saying we are one. The community will tell you that my blood brother and his family or my in-laws are on the other side of the border, so there is no way I can’t accommodate them when they visit and there is no way I can live without visiting them.”

Minutes of a meeting held between the taskforce and community leaders from Nyakomba, Samanyika, Nyadowa and Bumhira attended by 118 villagers between 9 and 10 June 2020, organised by Diocese of Mutare Community Care Programme show that the community made a commitment to help contain the virus while interacting safely with relatives.

They called on the government and the local authority to ensure the provision of water, masks and to periodically disinfect shopping and market centres. The community leaders pledged to ensure hygiene and social distancing is maintained in their areas as well as to speedily report suspected cases.

A community leader from Sanyamaropa village, Evermarry Samungure (pictured), said the border community was benefitting from the interaction between from the two countries.

“There is a lot of movement between the two countries because we are related and depend on each other. For example, people from Mozambique come to Zimbabwe to access schools and shops, because on their side the shops are far although it’s cheaper to buy in Mozambique. But if we want to buy in bulk, we cross over into Mozambique and go to Katandika because it’s way, way cheaper,” Samungure said.

“It’s a punishing journey but worth it because we travel for two hours on foot to Rwenze in Mozambique before catching a lift to Katandika. It is an hour’s journey. For cheaper stuff, you travel further to Chimoio, which is 70 kilometres from Katandika, but for most Zimbabweans Katandika is good enough, especially if one wants things such as rice, cooking oil and other groceries.”

Samungure said villagers were aware of the risks of Covid-19 and were taking measures to protect themselves at individual and community levels, thanks to outreach programmes.