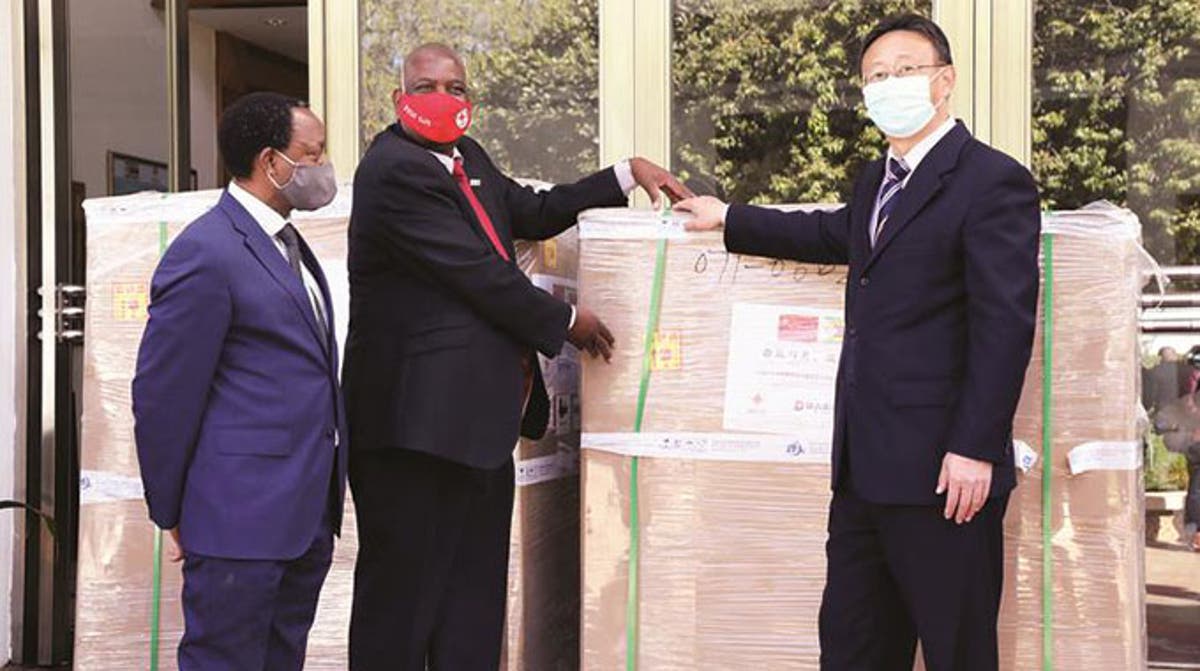 Edson Mlambo pictured at the centre

THE Zimbabwe Red Cross Society (ZRCS) is at a crossroads after last weekend’s re-election of its president Edson Mlambo, who is battling corruption charges in the Anti-Corruption Court, with disgruntled officials saying the poll was conducted unconstitutionally, documents available show.
The election was held at a time donors are tightening their purse strings as a result of rising corruption allegations in the organisation.

OWEN GAGARE
The poll was overseen by acting secretary-general Elias Hwenga, who is also appearing in court for allegedly obstructing or defeating the course of justice, after he reportedly fired five subordinates who had been interviewed by the Zimbabwe Anti-Corruption Commission (Zacc) in connection with graft allegations against senior staffers.
Following the interviews, Zacc officials arrested Mlambo on 9 September. Midlands provincial chairperson Vutete Mazorodze Hapanyengwi was also arrested, while then secretary-general Maxwell Phiri, who is facing a number of corruption allegations, fled and is at large.
Mlambo was in court on Thursday under case number ACC115/20 where he is answering to two counts of fraud. He allegedly defrauded the society of a Toyota Prado, registration number ADM 9991 and a Mitsubishi Canter, registration number ABI 6104, which he transferred to his name without authorisation. Zacc is investigating several other allegations. The governing board of the society in 2015 and 2018 gave authority for the disposal of society vehicles through restrictive tenders where preference was given to members of the national governing council.
Mlambo placed bids for the two vehicles, but did not pay for them although the human resources department prepared an agreement of sale between the parties. Phiri is alleged to have instructed Hwenga, who was the human resources director, to give Mlambo the vehicle despite non-payment, contrary to the agreement of sale which stated that it would be handed over only after full payment.
Senior ZRCS officials say Mlambo was uncostitutionally re-elected after failing to ensure the establishment of an elections committee in line with Article 29.9 of the new constitution adopted in November 2018.
Officials also claimed some prospective candidates were fired from the organisation or side-lined so that they do not participate in polls.  Among other functions, the elections committee has the mandate to “develop electoral standards for campaigning; draw up criteria for the positions of president and vice-president, to be approved by the governing board at least one year before the relevant election; review against the relevant criteria the applications of all candidates for the governing board.”
The elections committee also monitors and oversees all elections and announces the results.
Officials also said the elections were not conducted in line with Article 55, which states that the elections committee should distribute nomination forms at least four weeks before the General Assembly, Provincial Assembly, District Assembly or Branch Assembly meet.
ZRCS staffers also say Mlambo was facing serious charges such that an internal inquiry should have been instituted to establish the substance or lack thereof in line with the society’s fraud and anti-corruption policy, before seeking election.
Documents seen by The NewsHawks indicate that ZRCS staffers and volunteers have for some time been imploring the board to tackle cases of corruption, arguing that corruption allegations were causing donor flight.
“Because of lack of accountability and transparency in donor and national society funds management, there is serious donor fatigue and mistrust dealing directly with the national society to the detriment of the generality of employees, project beneficiaries and the country at large,” a document written by employers for the attention of Zacc, council members, provincial managers, directors and heads of department reads.
“The national society cannot effectively participate in very important interventions of humanitarian nature across the country due to lack of financial support eg Covid-19 response, there is virtually no meaningful funding from all global partners.”
Among other issues, workers questioned the unprocedural disposal of the society’s commercial stand along Fife Avenue in Harare, rampant nepotism in the recruitment of staff, the unprocedural awarding of tenders, misuse of donor funds and society funds, corruption in the national society vehicle disposals and violation of the procurement policy, among other anomalies.
Mlambo agreed to respond to questions by 8pm on Thursday, but a ZRCS spokesperson later said an appropriate responce would be issued soon. Phiri, allegedly on the run, was unreachable on his cellphone number. Hwenga was also unreachable. ZRCS is a voluntary organisation whose aim is to alleviate suffering in vulnerable communities. It is an auxiliary to government as mandated through the Zimbabwe Red Cross Society Act of Parliament No 30 of 1981.
Orphans and Vulnerable Children, the elderly, the chronically ill, the HIV infected and affected, the elderly and widowed and the generally disadvantaged members of the community make up its beneficiary list.

How military intelligence swooped on Rushwaya