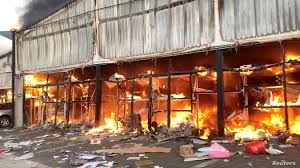 SOUTH Africans find themselves confronted with the ugly spectre of rioting and looting that has claimed over 200 lives, and also dealt a devastating blow to the economy.

The situation remains extremely volatile, and while narratives abound, particularly on social media, facts are in short supply. It is important to examine the situation in as level-headed a manner as possible to gain an understanding of what has really befallen our nation.

The competing narratives fall broadly into four views. According to one view, the social unrest represents support of former President Jacob Zuma on the part of people angered by his incarceration.

According to the second view, the social unrest is an expression of legitimate discontent with the ANC’s rule. The third view is that the violence is a wave of organised and spontaneous or opportunistic criminality.

The fourth view, which appears increasingly to be the official line, is that the unrest represents an attempted coup by Zuma supporters, which was anticipated and is being suppressed by the state.

Each of these narratives needs to be treated with caution and carefully tested. As regards the first narrative, claims have been made that the support for Zuma emanates either from Zulu ethnic nationalists or from supporters of the Radical Economic Transformation faction within the ANC.

If so, it is not clear whether these groups are the same thing, or whether they overlap in some way.

At any rate, the Zulu king, Misuzulu kaZwelithini, appears to have both recognised and decried the involvement of Zulu nationalists. As regards the second narrative, the unrest has occurred (so far) in only two provinces, KwaZulu-Natal and Gauteng.

The widespread response of many communities banding together to defend economic resources such as malls would appear to indicate that the violence is restricted to a minority.

So far, members of the government have tended to resort to variations of the third and fourth narratives to explain the chaos that has erupted on their watch.

Some have suggested that it is mainly opportunistic criminality, while others have claimed that it is an attempt to bring down the government by instigating generalised violence.

These mixed messages are themselves a cause for concern. The government has struggled to explain how its intelligence services failed to inform it of the mood in the country.

Moreover, little to no evidence has been presented to support the claim that the state has successfully thwarted a coup, and the claim rather neatly diverts attention from the other narratives outlined here.

If the unrest is due to widespread discontent or criminality, or both, clearly the government has failed in some of its primary roles.

For now, on the available information, one thing is clear: the ongoing rampage in South Africa can be attributed to a monumental failure of governance.

Whatever else it is, it certainly the culmination of years of frustration with a ruling party’s incompetence and corruption, which have left a nation mired in poverty.

The devastating effects of this lack of governance have been exacerbated by the Covid-19 pandemic, and lockdowns having obliterated livelihoods of the most vulnerable (and perhaps therefore most susceptible to populist inflammatory rhetoric).

To get to the heart of the matter, Good Governance Africa (GGA) will be delivering a series of analytical articles to examine the matters at the heart of this crisis. We weave together a number of important threads by reading between the lines.

First, we examine the question of whether there was or is a coup attempt, as the state might have us believe. This will also provide a much-needed anatomy of state security and intelligence failures.

Missing from the public domain is a comprehensive analysis of the dynamics animating the heart of the deep state in the wake of post-2008 subversion and hollowing out.

Second, we analyse key political economy drivers of socio-economic desperation that combine with coordinated insurrection to create literal tinder boxes across the country. At the same time, we make sense of why the looting has been limited to KZN and Gauteng.

This piece tackles the agenda of the Radical Economic Transformation (RET) brigade, which has deeply legitimate elements but has also been subverted for crude political destabilisation purposes.

It also speaks to the legacy effects of migrant labour and the nuances of Zulu nationalism, and how this intersects with RET. Ultimately, South Africa has to have a clear plan of how to adopt a form of capitalism that breaks the current oligopolistic politico-business elite bargain and delivers broad-based benefits if we are to navigate coherently out of this mess.

Third, we address the question of service delivery failure, malfeasance and maladministration, especially at the local level. The facts bear out that protest action has risen in frequency across the country.

Combined with the lack of available job opportunities, especially for the youth, this situation renders thousands of idle and hopeless people susceptible to participating in disruptive action with little regard to the motives of those instigating said action.

Finally, we show how each of the above threads have a bearing on what is ultimately a failure of governance. Governance is not some abstract concept; it speaks to the heart of our current tragedy.

It is defined as the authoritative allocation of resources and answers the critical questions of who gets what, when and how. The state is responsible for the protection of lives and property, for providing justice, education and infrastructure that enable a dynamic economy that serves all its citizens.

Nonetheless, we are not without hope. After a decade of reckless and wasteful abuses of power, it is a clear indication of progress toward the rule of law that the judiciary has shown itself capable of holding a figure such as former president Jacob Zuma to account for his failure to respect the constitution.

Until it happened, few analysts would confidently have predicted it materialising. The Constitutional Court’s firmness in upholding the law is to be celebrated and applauded as a crucial step in the direction of government accountability.

Yet if anything is clear at this stage, it is that resistance to Zuma’s incarceration, and other attempts by senior ruling party figures to evade accountability under the constitution, are based on the idea that influential members of the ruling elite should not be subject to the same law as other citizens.

More generally, it is also clear that South Africa’s governing party has comprehensively failed to deliver on its core duties and responsibilities.

We are at a turning point in our history as a young democracy. We should all stand together in the fight to build the institutions of the state in a more inclusive and programmatic manner.

In the coming days, GGA will explore the key themes underlying these unfortunate events, with the aim of providing clarity to the national discussion.

Moreover, we aim to be not merely critical, but constructive, and will also outline key steps that will be necessary to turn this disaster into an opportunity.

As has frequently been pointed out, South Africa is a country of enormous potential. It is only through political renewal and economic growth that we can begin to realise it.

*About the writer: Jurgens is the editor of The Africa Governance Papers, the independent academic journal of Good Governance Africa.

Related Topics:South Africa
Up Next

South African unrest: This is what a failed state looks like