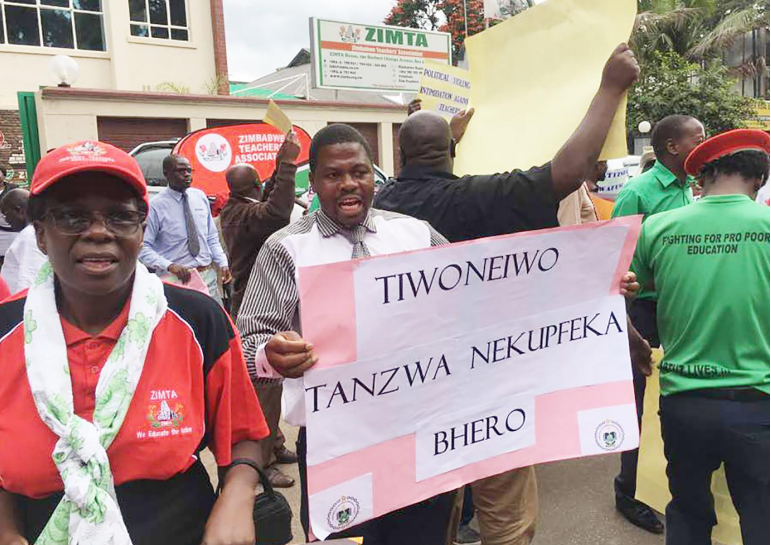 THE Amalgamated Rural Teachers’ Union of Zimbabwe (Artuz) has commissioned research, whose damning findings poke fresh holes in the country’s collapsing education sector which has been in decline since Independence in 1980.

Artuz decries the falling standards and proffers alternative financing models for the education system which was further strained by the Covid-19 crisis.

The 24-paged paper by Artuz is titled Beyond Geographies of Inequality: Public Education Financing in Post Covid-19 Zimbabwe.

The paper identifies critical sources of funding for education that can be used by the government to salvage the sector. It will be shared with policymakers to help them re-imagine education financing to end the current poor standards that have grossly affected pass rates.

The report highlights that the national subject pass rate for the 2021 Ordinary Level was 26.34%, which was marginally higher than the 24.77% recorded in 2020.

Artuz in its report also notes that “most of the rural schools lack essential physical and digital infrastructure for teaching and learning, including roads and other forms of transportation, electricity, and Information and Communication Technologies (ICTs), they are often isolated and poorly developed.”

The organisation also says the infrastructure is virtually non-existent as teachers and learners at schools like Chikwanda Primary in Masvingo province are forced to conduct lessons in make[1]shift structures and under trees.

Learners in rural areas, according to Artuz, are already at a disadvantage since they lack books and learning resources due to the socio-economic conditions of rural communities. Poor remuneration is also a concern.

“Teachers’ salaries have been eroded to less than 50% of the Total Consumption Poverty Line (TCPL) due to inflation and the rise in cost of living. As of June 2022, the salary of teachers was 175 USD plus $20 000 RTGS on which it was below standards and poverty datum line,” the report says.

“However, income inequality is also evident as senior educational officials were given US$125 per day allowances in September 2022. Teachers, when they retire, their pensions are eroded by inflation, including the lump sum payments. When schools opened on February 7, 2022 teacher unions in Zimbabwe declared that their members were incapacitated to report for duty.”

The union urged government to use the 10% shares collected from mines to solve some of the problems.

“The Community Share Ownership Schemes/ Trusts, which have been established in around seven of the fifty-nine (59) districts of the nation, hold the 10% that makes up the 51% indigenisation and economic empowerment quota of a qualifying enterprise on behalf of the com[1]munities.

“There is therefore the need for the organised, independent provincial board that account and take the 10% from all mining companies and direct to development of the districts-with half of 10% directed to ICT [information communication technology] of the public schools,” reads the report. On improving infrastructure in rural areas like schools, Artuz recommends that the Rural Electrification Fund (REF), financed through 6% deductions on electricity sales be spent on such projects.

Zimbabwe has a policy in which the REF gets 6% from all electricity sales by consumers coun[1]trywide, mostly pre-paid customers. The money is for projects earmarked towards developing power supplies to the rural and outlying areas.

Artuz is therefore pushing that electrification of rural schools be funded by this money in order to improve learning conditions of pupils who will then be able to benefit from ICTs.

The union also recommended the adoption of the Rwanda model on teacher salaries to levels above the prevailing poverty datum line and inflation scales as another solution to improving pass rates.

“Rather than salaries only, there is need for additional basic allowances through the incentives. Zimbabwe needs to re-adopt the approach which was formally applied to the teachers. Rwanda is now the destination for international qualified teachers, including Zimbabwe due to these better salaries,” Artuz says.

“Teacher working conditions can only be improved through genuine dialogue between teacher unions like the Progressive Teachers’ union of Zimbabwe, Zimbabwe Teachers’ Association and Artuz and government as the employer and regulator.

“Dialogue is critical in resolving problems, and citizens should be accorded the right to air their views. Citizens should be able to enjoy their right of freedom of association; the rights to protest and to petition against actions that they believe are against their interests.”

Artuz and other unions, who in the past demanded salaries pegged at scales that prevailed in 2017 under which they got US$540, are now demanding gross earnings of US$671, citing a rise in living expenses.