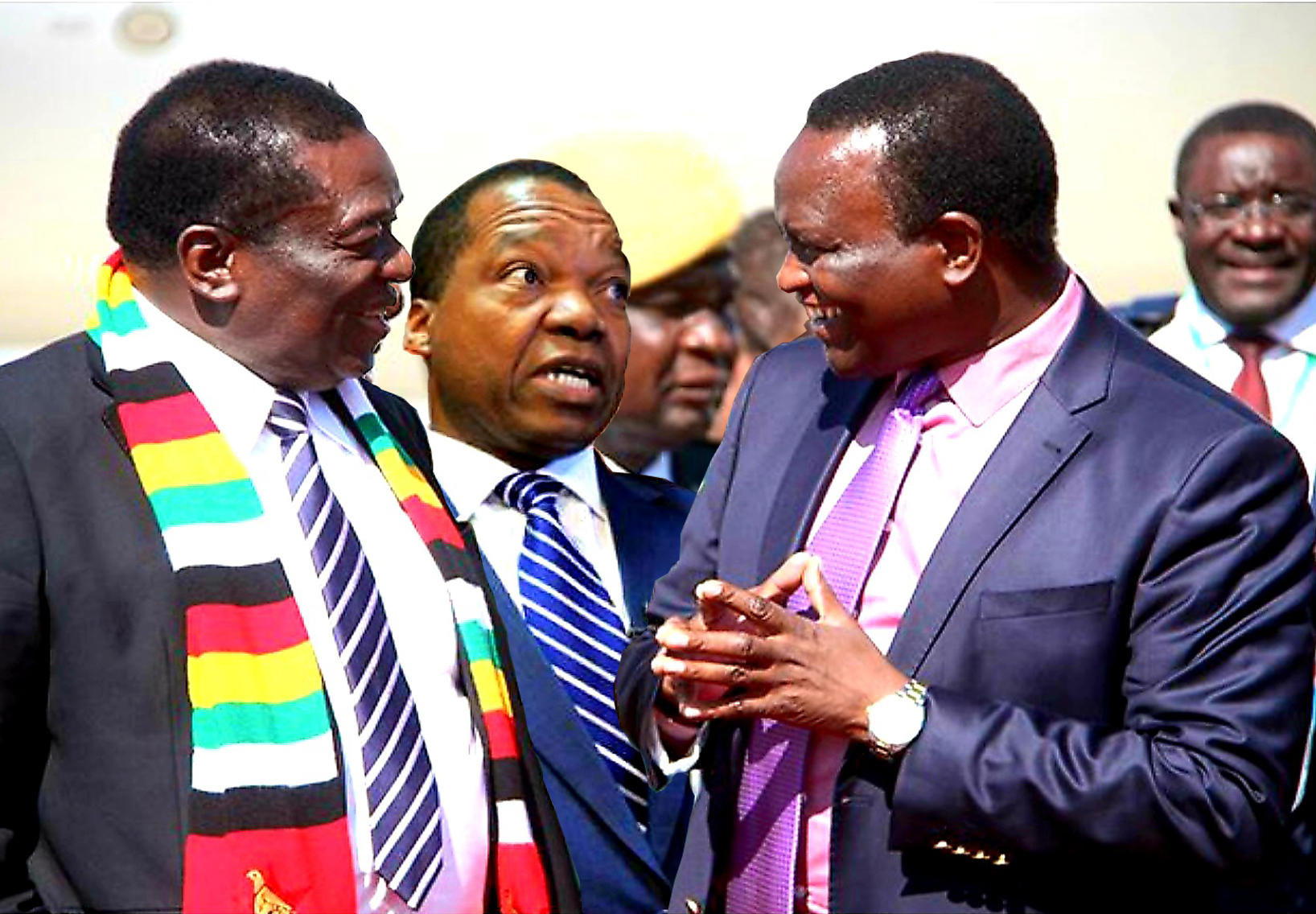 ZIMBABWE’s state security service, the Central Intelligence Organisation (CIO), is investigating a volatile commercial dispute that has erupted between the government and interim trustees of Caps Pharmaceutical Trust involving a US$45 million deal, The NewsHawks has established.

BERNARD MPOFU
This comes as the High Court earlier this month ruled that government should seek arbitration with Caps Pharmaceutical Trust to ascertain the shareholding structure that emerged and movement of money involved  when the state bought into the pharmaceutical giant.

Government in 2015 acquired a majority 68% shareholding in Caps Holdings Ltd and all its subsidiaries. The deal, which was bankrolled through Treasury Bills (TBs), was approved by cabinet on 19 November 2015.

A week later – on 27 November 2015 – cabinet also approved payment of US$45 million for the equity stake.

Documents seen by The NewsHawks from various parties in the dispute show that the deal started rolling on 19 November 2015 in a cabinet meeting chaired by the now late former president Robert Mugabe in the presence of President Emmerson Mnangagwa (then Vice-President).

Mnangagwa has been involved throughout the process. At later stages, current Vice-President Constantino Chiwenga also got involved in the deal.

The CIO was also involved from the beginning as its former Director-General Happyton Bonyongwe attended meetings to clinch the deal.

CIO, documents say, has also been briefing its current Director-General Isaac Moyo and Mnangagwa on the investigation. Mnangagwa – now as president – has held several meetings with Moyo and Mangudya over the complicated transaction and the resultant blazing dispute.

The intelligence service has always been involved in the deal right from the beginning as Bonyongwe would attend all crucial meetings relating to the transaction.

Despite initial grey areas, all has been well until October when Industry and Commerce minister Sekai Nzenza tried to appoint a new board for one of the entities, Caps (Pvt) Ltd, ahead of the annual general meeting.

Caps Pharmaceutical Trust took Nzenza to court over her move ahead of an annual general meeting which was set for 30 October.

In a subsequent judgment on that matter earlier this month, High Court judge Justice Owen Tagu said the issue of shareholding first needs to go for arbitration as both parties seemed to have a legitimate claim.

In the meantime, Nzenza had to stop appointing a new board.

Tagu said on paper Caps Pharmaceutical Trust, as represented by Majaka and management, had a genuine claim to the majority shareholding of one of the strategic entities, Caps (Pvt) Ltd, which is central to the new ownership structure that emerged after the unbundling of Caps Holdings Ltd.

Following its delisting from the Zimbabwe Stock Exchange (ZSE) in 2011, Caps Holdings and the central bank entered into an agreement for the sale of a majority stake  from Mutanda, the then single largest majority shareholder who owned the company through various entities.

According to a sale of shares agreement seen by The NewsHawks, the Fred Mutanda Family Trust, through its entities, vehicles and individuals that include Fredex Financial Services, FCM Investment Limited, New Africa Nominees, IH Nominees, Frederick Charles Mutanda and Gloostone Investment, held the 67.56% shareholding.

Government bought that equity through Reserve Bank of Zimbabwe (RBZ) through TBs.
Before delisting from the ZSE on 30 September 2011, Caps Holdings’ subsidiaries included Caps (Private) Limited, Hermes Laboratories (Private) Limited, Autosterile (Private) Limited, QV Pharmacies, St Anne’s Hospital and Geddes Limited. After the delisting, some of the company’s assets were attached to pay off debts. St. Annes was sold back to the original owners Little Company of Mary.

After recapitalisation and resuscitation of the company, a dispute erupted between Majaka and his colleagues on one side and government on the other over the shareholding structure.

The row exploded into the public domain in October following an attempt by Nzenza to appoint new board members for Caps (Pvt) Ltd.

Apart from the appointment of directors by government, the dispute involved the issue of shares to government, instruction to First Transfer Secretaries for change of company documentation and share registers to reflect the spirit of the agreement and effect of the acquisition; loans to Caps (Pvt) Ltd and assistance with regulatory requirements.

There was also the issue of seizure of assets, interference with the Zimbabwe Asset Management Corporation and a recent court case, as well as  a claim of a controlling shareholding of Caps (Pvt) Ltd by Caps Pharmaceutical Trust.

While government says it owns all the entities, including Caps Manufacturing Ltd, 68%, Caps Pharmaceutical Trust insists it controls one of the unbundled companies – Caps (Pvt) Ltd – 51%. It says government owns 68% of the 49% it acquired in that entity from Mutanda; effectively meaning it has 32% of Caps (Pvt) Ltd.

This has become a logjam in the whole deal. Tagu said this imbroglio must be untangled through arbitration. After Caps Pharmaceutical Trust took Nzenza to court three weeks ago to block the appointment of a new board Caps (Pvt) Ltd without prior consultation, Tagu ruled that the minister should stop proceeding with the process.

Nzenza had proposed to appoint new board members for Caps (Pvt) Ltd ahead of an annual general meeting that was scheduled for 30 October 2020, a move which trustees of Caps Pharmaceutical Trust opposed.

In his interim relief handed down on 21 November, Tagu interdicted the minister and the board members that had been appointed from carrying out their duties until the arbitration process has been finalised.

“The 1st respondent (Nzenza) be and is hereby interdicted from interfering with the affairs of 3rd respondent (Caps Pvt Ltd) and appointment of any persons as directors, employees of or consultants to the 3rd respondent. The current directors as appointed by the shareholders shall continue to administer the 3rdrespondent’s affairs,” reads the interim judgment in part.

Besides the dispute over the appointment of the board, questions have also been asked about the valuation of Caps Holdings after the then single largest majority shareholder – Mutanda – disposed of his 68% stake to government, represented by the RBZ.

A week after the first cabinet meeting which approved the deal, government authorised payment for the shares.

Chinamasa wrote a letter to Mangudya to issue TBs in respect of the payment of the 67,56%% shareholding.

However, Caps Pharmaceutical Trust says government had acquired 67.56% in all entities which had been unbundled except Caps (Pvt) Ltd which it owns 51%.

According to the trustees, government acquired 67.56% of the balance of the 49% shareholding in Caps (Pvt) Ltd which effectively meant that government had 32% equity. Given this dispute, the CIO has been investigating several aspects of the transaction. Documents show they want to know: Who owns what and how much was paid for the purchase of the equity in those companies?

Before delisting, the Caps group had been reporting losses from 2005 to 2011. In 2009, the group reported a loss of about US$500 000 and in 2010 a loss of about US$1 million was incurred. Hence the payment of TBs with a face value of US$45 million also became a subject of interest in the CIO-led probe.

The scope of the investigation, documents show, also included establishing why the central bank issued TBs with a face value of US$20 million to Mutanda before the sale was fully completed.

When CAPS Holdings Limited was still listed on the ZSE in 2011 the total value of its
shares was US$2.5 million.

A source involved said this was done because Mutanda had refused to sign before he was paid.