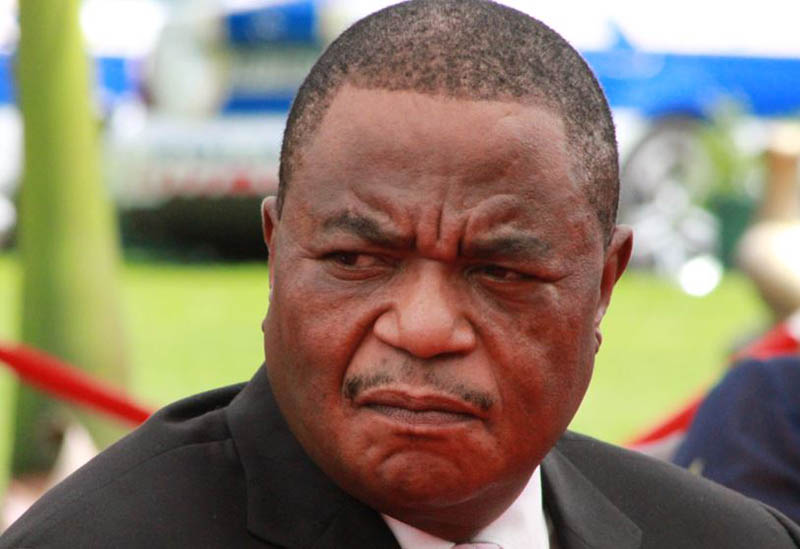 ZANU PF co-deputy president Constantino Chiwenga has effectively conceded defeat by announcing his arch-rival, President Emmerson Mnangagwa, as the sole presidential candidate for the ruling party ahead of next year’s general elections.

As reported by The NewsHawks last week, Mnangagwa emerged uncontested as party leader after outwitting his coup ally, Chiwenga, shattering the latter’s ambition to be Zanu PF’s candidate in the next election.

Amid cheers from the crowd, Chiwenga announced his own defeat at the just-ended party’s 7th elective congress in Harare and proclaimed Mnangagwa as the leader of Zanu PF.

“Whilst this congress is supposed to be an elective congress, the party membership and its structures, and leagues have already clearly thunderously endorsed Cde Emmerson Dambudzo Mnangagwa as the President and first secretary and as the sole presidential candidate for the ruling party, Zanu PF in the 2023 harmonised elections,” said Chiwenga.

“People have thus spoken, let their will be obeyed so that His Excellency Cde Dr. Emmerson Mnangagwa can take us to the Zimbabwe we envision. He is the one and only candidate we know. Shumba Murambwi weshambochena deserves another opportunity to lead us to the next level,”

“It is only logical that we do the right thing and pledge our total commitment to remain fully behind our God-given leader and first secretary of our party Zanu PF, His Excellency Dr Emmerson Mnangagwa,” he added.

Chiwenga suffered setbacks in his spirited fight for the post of party president, including a one-year break, when he was battling for his life in hospitals, the death of his trusted generals Perrance Shiri and Sibusiso Moyo and a dwindling support within the army.

The agreement from the 2017 military coup was that Mnangagwa would complete Mugabe’s term and serve one other term before handing over power to his coup ally, Chiwenga the 2023-2028 term.

Mnangagwa however made strides in consolidating power, during the time when Chiwenga was seeking treatment. The convening of the congress was challenged by Zanu PF youth Sybeth Msengezi, but the case is yet to be heard before the court.

What has happened to Chiwenga is a similar script to that which was used in 2004 when eight provinces had endorsed Mnangagwa as vice-president of the party.

As secretary for adminstration, Mnangagwa was made to announce that the second Vice-President would be a woman, and Joice Mujuru got the coveted slot ahead of Mnangagwa. Chiwenga’s ouster from the race was a premeditated plan by Mnangagwa since 2017.

Scared of being ousted by Chiwenga and his faction, Mnangagwa had avoided the scheduled 2019 congress after his controversial ascendancy through a central committee meeting held on 19 November 2017 at party headquarters in Harare.

An extraordinary congress was held in December 2017 to install him as party leader, but the constitutional processes were not followed to the letter and spirit of the law. Zanu PF youth member Musengezi, publicly viewed as Chiwenga’s proxy, is challenging Mnangagwa’s legitimacy in the courts. He wants the congress stopped until that matter has been resolved as they are intertwined, but Zanu PF is forging ahead all the same.

Zanu PF insiders say Chiwenga lost political ground when he fell ill and almost died between 2018 and 2019. From there, they say, he never quite recovered even though his faction has remained intact, with potential to regroup and fight back.

At the same conference, Chiwenga applauded Mnangagwa for political tolerance and inclusion. This is in stark contrast to the violent attacks and prolonged pretrial deten tion of members of the opposition Citizens’ Coalition for Change (CCC).

“There is no doubt that through his (Mnangagwa) focused leadership our country continues to move towards an era of political tolerance, inclusivity and economic empowerment which resonates well with this year’s theme, ‘Building a Prosperous Zimbabwe, Leaving No-one And No Place Behind’,” said Chiwenga.

His remarks came a day after the leader of the opposition CCC, Nelson Chamisa, was once again barred from visiting Zengeza West MP, Job Sikhala, Chitungwiza North MP, Godfrey Sithole, and the 14 other detainees at Chikurubi Maximum Security Prison.

The 15 were arrested in June and are yet to go to trial, more than 130 days later and their unfair treatment is viewed by many as part of a lawfare plot to silence dissent. In recent weeks Zanu PF thugs have unleashed violence on opposition legislators and members during by-election campaigns.

The latest violence in Matobo has seen the hospitalisation of Bulawayo metropolitan MP Jasmine Toffa. In Gokwe, Chamisa’s motorcade and journalists were attacked by people in Zanu PF regalia.

The same happened to members of the opposition in Wedza and Chitungwiza ahead of by-elections in the respective wards. Chiwenga went on to claim that the opposition has warmed up to Mnangagwa’s leadership. He was referring to political parties which have cosyied up to Zanu PF under the Political Actors Dialogue grouping.

“Today opposition political parties gradually acknowledge his leadership and the vision he has impacted on our generation and our nation,” he said.

“For instance, several high-ranking opposition figures have rejoined our great party Zanu PF, itself the confirmed mother political party of our nation,” he added.

In a grotesque twist of irony, Chiwenga chanted “pasi nemhirizhonga [down with violence]” in his slogan, even when Zanu PF has unleashed a reign of terror on the opposition.

Chiwenga put his head on the block for Mnangagwa