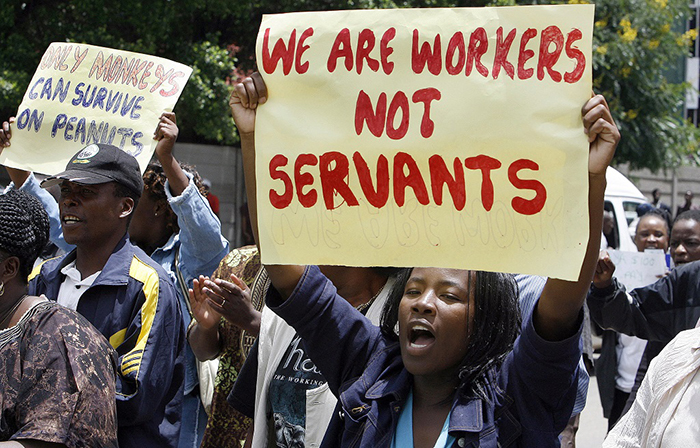 GOVERNMENT has cast doubt over the possibility of paying civil servants in US dollars as inflation continues to ravage salaries amid growing tensions and fears of unrest, The NewsHawks can report.

A meeting held on Monday between the ministry of Labour, ministry of Finance and civil servants failed to find a solution to the salary crisis, with the government keeping its workers guessing on its next move.

Civil servants are demanding salaries of pre-October 2018, equivalent to US$540 for nurses, teachers, and other workers. The government says it cannot afford the hefty wage bill.

This comes after civil servants failed to engage in a two-day national strike, with members choosing to report for duty amid reports of intimidation and infiltration of the unions.

On Monday, the Finance ministry told union leaders the government had no capacity to pay civil servants in US dollars.

This followed a candid presentation of the workers’ demands that included, a justifiable demand for a US dollar salary with a value equivalent to pre-October 2018 levels, implementation of agreed non-salary benefits, inclusion of workers in the governance of the Government Employees Mutual Savings Fund and pension fund and the need for a universal medical allowance to all civil servants.

“The ministry of Finance in response stressed that the government treats the welfare of civil servants as a priority, but was unequivocal that government does not yet have the capacity to pay the entire salary bill in US dollars,” the Zimbabwe Confederation of Public Sector Trade Unions (ZPCSTU) said.

The government once again managed to dribble past its workers, saying it will “review the situation in September to see if there is scope to increase the US dollar and as well the Zimdollar components premised on revenue inflows”.

The Finance ministry was wary not to commit itself to paying salaries in US dollars, saying this can only depend on revenue inflows.

Also present was Labour minister Paul Mavima who was told to find ways to find a plan to safeguard the value of wages.

Mavima also concurred with the workers on the importance of inclusivity and promised to look into the concerns raised in the workers’ presentation.

“The workers were able to demonstrate the desperate situation regards their survival and, as way forward, the honourable minister of Labour asked that we wait for September to see how far government will go towards meeting our expectations in terms of the cost of living and the future of our work,” ZPCSTU said.

Last week, Finance minister Mthuli Ncube was compelled by pressure from a restive public service, a weakening domestic currency and rising inflation to announce a ZW$929 billion supplementary budget ahead of the watershed 2023 general elections.

Zimbabwe is battling rising year-on-year inflation which galloped from 191% in June to 256% in July.

Desperate to pacify the public service as the economy continues to wobble, the country’s Treasury chief committed 53% of the additional budgetary financing to public sector wages at a time hospitals and schools remain under-stocked.

But civil servants continue to demand better pay in US dollars.

According to Ncube, the 2022 National Budget had set aside ZW$340 billion for the compensation of public servants, of which outlays for the period to June 2022 stood at ZW$193.8 billion, against a target of ZW$160.2 billion, giving a negative variance of ZW$33.6 billion.

“The bulk of the supplementary budget (53%) is going towards employment costs to cushion public servants against increasing cost of living. The balance of the additional resources are going towards meeting government consumables (18%), capital projects (19%) and social benefits (7%),” Ncube said.

As inflation continues to soar to stratospheric levels, the budget provision now needs to be supplemented, considering reviews in employment costs implemented over the period January 2022 to July 2022.

Treasury also introduced a flat cushioning allowance of US$100 and US$50 to civil servants and government pensioners, respectively, payable in hard currency effective 1 March 2022, reviewed sector-specific allowances in health, education and uniformed sectors and most recently effected a 100% salary increment effective on 1 July 2022.

Before this week’s salary talks, negotiations under the National Joint Negotiating Council (NJCNC) and the Health Service Bipartite Negotiating Forum broke down after the authorities reportedly took too long to implement agreed conditions of service.