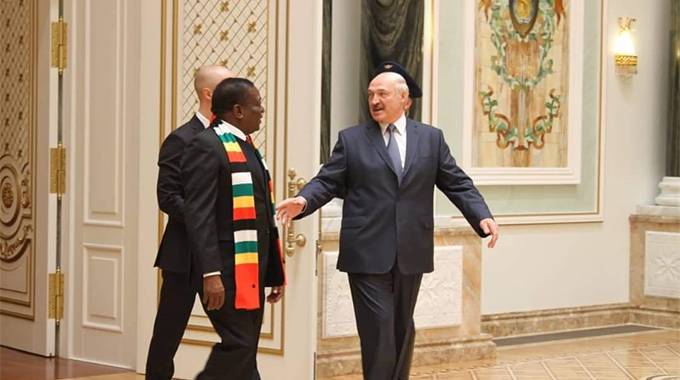 PRESIDENT Emmerson Mnangagwa and Belarusian dictator Alexander Lukashenko’s relationship continues to strengthen, at a time the Eastern European country is widening its foot print in the country amid worries that deals between the two countries were benefitting the leaders and close associates but not the generality of Zimbabweans.

Mnangagwa visited Belarus in January 2019 where the two leaders discussed various deals, culminating in companies owned by Lukashenko’s close associates getting lucrative deals in agriculture in various areas including gold mining and agriculture.

Barely a month after Harare announced that it was concluding a framework to award the Eastern European country a tender to construct a 100-megawatt photovoltaic solar plant in Norton, Cabinet was this week discussing strengthening trade and cooperation with Belarus.

Last month, the government announced that it had considered and approved a framework agreement with Belarus on the construction of a 100MW solar power plant.

The Belarus Solar Power Plant was granted national project status and was given cabinet greenlight to be undertaken through Zesa Holdings.

Information minister Monica Mutsvangwa at the last post-cabinet briefing for 2022 said Zimbabwe had entered into what she called a Joint Permanent Commission with Belarus that would see the two countries trading in various sectors, including wildlife, for the next five years with a possibility of renewing the partnership.

The deal like the solar power plant construction was, once again, negotiated by Justice minister Ziyambi Ziyambi.

“Cabinet considered and approved ratification of the Agreement between the Republic of Zimbabwe and the Republic of Belarus on the establishment of a Joint Permanent Commission as presented by the Minister of Justice, Legal and Parliamentary Affairs, Honourable Ziyambi Ziyambi, Chairman of the Cabinet Committee on Legislation.”

“The Agreement will provide for closer cooperation between the Republic of Zimbabwe and the Republic of Belarus in diverse fields of mutual interest, including but not limited to the following: economy, commerce, and finance; trade and investment; tourism, culture, and information; education, science and technology; and agriculture, parks and wildlife,” she said.

Mutsvangwa also pointed out that the latest agreement will further provide for the composition of the commission, its functions, funding, financial arrangements and dispute settlement, but did not enter into further details.

“The Agreement will result in the establishment of a Joint Permanent Commission which will subsist for 5 years and will be subject to automatic renewal by the Republic of Zimbabwe and the Republic of Belarus,” she said.

Lukashenko calls himself “the last dictator of Europe” and leads an authoritarian regime characterised by repression of citizens who have been under his heavy hand for 27 years.

Belarus is home to Mnangagwa’s close ally and alleged arms dealer Alexander Zingman, whom he appointed Zimbabwe’s honorary consul to the country in 2019. Zingman has facilitated many deals between Zimbabwe and Belarus since his appointment, raking in millions of dollars in the process.

Local Government minister July Moyo was this year accused of circumventing the public tendering system by ordering rural and urban councils to divert devolution funds to pay for fire engines from a Belarusian company owned by Zingman.

The murky arrangement, which Moyo said was a “government-to-government” agreement, could cost the councils over US$32 million. The deal did not go to tender. The fire engines are being marketed by Zingman’s AFRATRADE DMCC and are manufactured by a Belarusian company, LLC Pozhsnab.

Following a public outcry over the deal, the government has not stated further details on it, but Harare City Council, through mayor Jacob Mafume, made it clear that it was not happy with the deal and wished it was cancelled.

Other local authorities, among them Bulawayo and Masvingo, have also indicated that they do not need the fire engines. In 2018, Viktar Sheiman, the president’s chief-of-staff and part-time overseer of “far arc” projects, visited Zimbabwe twice.

Shortly thereafter, he reported that he had signed contracts totalling US$60 million. In 2019, President Mnangagwa visited Belarus for three days.

In September 2019, Sheiman once again visited Zimbabwe, resulting in the two countries establishing a joint Belarusian-Zimbabwean construction company, a solar power plant, a joint logistics company, a transport hub like a “dry port”, and an agricultural complex with 10 000 hectares of land.

The sum of all signed agreements was estimated at US$350 million. Under the agriculture deal, Zingman’s company has been supplying tractors and other equipment. He has also supplied buses and is also into gold mining. Zingman is also an ally of Belarusian strongman Lukashenko.

The dodgy businessman, who was detained for 12 days in March last year in the Democratic Republic of Congo, was named in the Pandora Papers as one of two Belarusians who used shell companies in the Seychelles and the United Kingdom to mask their involvement and conflict of interest at the heart of the deal.

Zingman, who was arrested together with fellow Belarusian Oleg Vodchits and Italian businessman Paolo Persico, told a news conference in Harare at the time that they were questioned on suspicion of arms trafficking during detention.

According to a previous report by the Organised Crime and Corruption Reporting Project (OCCRP), Lukashenko’s front man, Sheiman, was dispatched to Zimbabwe in March 2018 to negotiate trade and business deals for his government. Indications were that Sheiman paved the way for a gold-mining deal between his son Sergei Sheiman and other Belarusians with offshore accounts, including Zingman.

Investigations by OCCRP further revealed that the mining deal was presented as a collaboration between the two countries, and Sheiman said it was intended to make “profit for Belarus”.

But in fact, the new joint venture, Zim Goldfields, reports OCCRS, was secretly co-owned by Sheiman’s son, Sergei, with no stake for the Belarusian state. Sheiman’s partner in the gold venture was Zingman.

OCCRP further reported that Zingman was detained for 12 days this March in the DRC. “A Press released by his Dubai-based company, Aftrade DMCC, specified that the reason for the incident was arms dealing allegations, which Zingman flatly denied.

He was released without charge.” According to OCCRP, documents from the Pandora Papers show how the two Belarusians used shell companies in the Seychelles and the UK to mask their involvement and the conflict of interest at the heart of the deal.