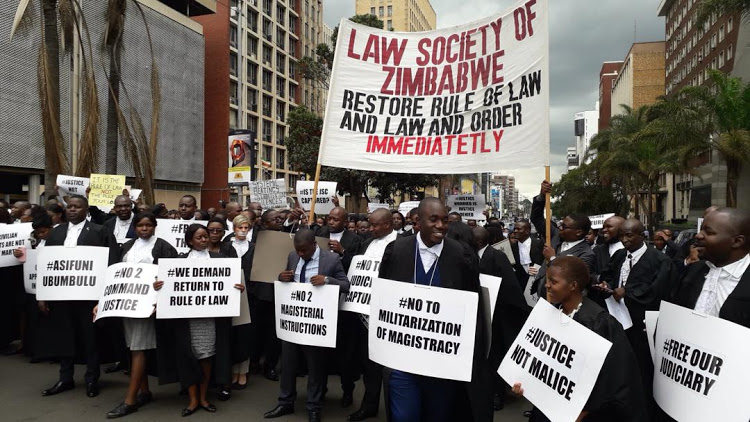 AS the government moved today to gazette controversial constitutional amendments to help President Emmerson Mnangagwa consolidate power as part of his 2023 re-election bid, agitated lawyers are digging in to fight the country’s despotic strongman who initially seized the reins through a military coup.

OWEN GAGARE
Details obtained by The NewsHawks — which has been covering Mnangagwa’s authoritarian power consolidation project closely — show that at least five court applications could be filed next week to challenge the hotly-contested amendments that have sparked public outrage.

The changes have sent clear signals the Mnanagwa regime is not only resisting reform but also pushing to restore the old Mugabe order — lock, stock and barrel.

One of the groups, led by prominent Harare lawyer Tendai Biti and advocate Thabani Mpofu, is set to file next.

Mpofu, who is main opposition MDC Alliance leader Nelson Chamisa’s lawyer, confirmed the move. “We are waiting for the gazetting of the Bills signed into law by the President to go to court,” Mpofu said.

“But we will first file an urgent chamber application on Section 328 in relation to incumbents benefitting from current changes against the constitution and law.”

To change section 328, one of the entrenched clauses, Mnangagwa has to go through a referendum, which has not been done.

Lawyers say the argument by official apparatchiks that judges are not affected by section 328 is untenable.

They say tenure, whether defined by the number of years served or age limit, remains tenure, hence subject to section 328.

The other group, led by Bulawayo attorney Matshobana Ncube, has already filed.

Other applications are expected from Veritas, a group of lawyers monitoring legislative and parliamentary processes, and the Zimbabwe Lawyers for Human Rights.

The lawyers are broadly combating Mnangagwa’s project on the basis of trampling constitutionalism and the unconstitutionality of the amendments.

This will make the Zimbabwe constitution, adopted by over three million voters by 94.4% in March 2013, a major political battleground. The battle is a precursor to the 2023 elections, which are bound to be a dirty war as usual.

The gist of the amendments — widely seen as a determined and fierce assault on democracy — is giving Mnangagwa powers to appoint judges and to extend Chief Justice Luke Malaba’s tenure by five years.

Malaba was by operation of law expected to cease to be chief justice on his 70th birthday at midnight on 15 May.

However, following the gazetting of the two amendments, he is now set for a tenure extension next week. Lawyers are itching to stop him dead in his tracks on the basis of a series of constitutional arguments.

Mnangagwa also seeks to abolish the running mate clause to continue appointing his deputies and getting weak candidates who do not threaten his grip on power.

He further wants to weaken devolution by denying MPs the opportunity to also serve in provincial councils, while removing mayors, who are mainly opposition, from metropolitan councils.

Sources told The NewsHawks Mnangagwa last month met with Justice minister Ziyambi Ziyambi and ordered him to move with lightning speed to pass both amendments to extend Malaba’s term and ensure he gets new wide and discretionary powers to consolidate his position through appointments and patronage.

Mnangagwa, sources added, also met Malaba to discuss his new tenure and the political context of the constitutional changes ahead of the 2023 elections.

First, Ziyambi moved fast in a quick succession of events to get the Constitution of Zimbabwe Amendment (No.1) Bill passed through Senate on 6 April.

Second, on 20 April, Zimbabwe’s National Assembly (the lower chamber of Parliament) passed the Constitution of Zimbabwe Amendment (No.2) Bill by a two-thirds majority vote of 191 to 22 MPs.

And then third, on 4 May, this piece of legislation went through its third and final reading in the Senate (the upper chamber) by a two-thirds majority of 65 to 10 senators.

The Bills were assented to by Mnangagwa and gazetted into law today.

Amendment (No.1) gives Mnangagwa power to appoint the Chief Justice – and this will allow him to arbitrarily extend Malaba’s tenure – the Deputy Chief Justice and Judge President.

Amendment (No.2) seeks to change the retirement age for judges, expunge the public interview process for judges, remove the presidential running mate clause, extend the women’s quota, introduce a youth quota (women and youth quotas are sweeteners), increase the number (from five to seven) of cabinet ministers chosen from outside parliament, broadening the scope of patronage, and weaken devolution.

However, The NewsHawks is reliably informed several lawyers’ groups will challenge the new laws on a number of fronts, including the supremacy of the constitution as enshrined in section 2.

They will also argue that sections 147 and 328 of the constitution were brazenly violated in passing the Bill into law.

Lawyers say the extension of the tenure of judges from 70 years to 75 years should not benefit incumbents as that violates section 328 of the constitution.

Further, they argue that the Amendment (No.1) should have been declared null and void after the Bill failed to meet the requirements of section 328 (5) of the constitution which requires a two-thirds majority for it to pass.

They also say section 147 of the constitution was violated when the Constitution of Zimbabwe Amendment (No.1) Bill was passed because it straddled two different lives of parliament, which is unconstitutional.

Section 147 of the constitution reads:
“On the dissolution of parliament, all proceedings pending at the time are terminated, and every Bill, motion, petition and other business lapses.”

When parliament, is dissolved all unfinished Bills are liquidated. If the executive wants to push through a Bill, it has to be first re-introduced in the new parliament.

However, with Constitution of Zimbabwe Amendment (No.1) Act, the executive picked up from where it had left in the life of the eighth parliament.

The violation of section 147 of the constitution was the main reason why Justice Anne-Marie Gowora gave a dissenting judgement when a three-judge ConCourt, also consisting of Justices Rita Makarau and Bharat Patel, heard a substantive application on 10 November 2020 by Parliament before granting another extension for Amendment (No.1) Bill to be passed again in a judgement delivered on 26 February 2021.

Its initial passing, without a two-thirds majority, was declared null and void by the Constitutional Court on 31 March 2020.

While Makarau was in favour of granting a 90-day extension, Patel sat on the fence and said he agreed with both judges although, crucially, he leaned towards Makarau who argued that accepting that section 147 of the constitution was violated would question the constitutionality of the 31 March 2020 court order which gave the first extension of 180 days to revive the Bill.

She said this would be inconsistent with the principle of the finality of a Constitutional Court decision in a particular case.

Gowora ruled that Parliament’s application was unconstitutional as it breached section 147 of the constitution.

“It lapsed by operation of law. The granting of the application in these circumstances would be inconsistent with the constitution.

“…For the above reasons, it is my view that the application should be dismissed with no order as to costs.”

Patel said he agreed with both judges although he crucially sided with Makarau. He however suggested that the violation of section 147 of the constitution could be challenged separately.

“Nonetheless, in the particular circumstances of this matter, despite the clear substantive implications of section 2 of the constitution, I am inclined to concur with the predominantly procedural stance adopted by Makarau AJCC in the determination of this application. I do so for the following reasons and in accordance with the principles that she has fully and ably expounded.”

Patel said the order granted by the court on 31 March 2020 is a final order, but suggested it can be reviewed in a separate matter.

“As such, it may only be reviewed or overruled by this court in a separate and distinct matter that might arise for determination in the future, where such departure is appropriate and justified. It cannot be departed from in the same matter, as is the case with the application before us, wherein the original cause of action has remained unaltered,” Patel said.

Lawyers will also strongly argue that the supremacy of the constitution was undermined by allowing section 147 to be violated.

Chief Justice Malaba’s tenure set to be extended next week