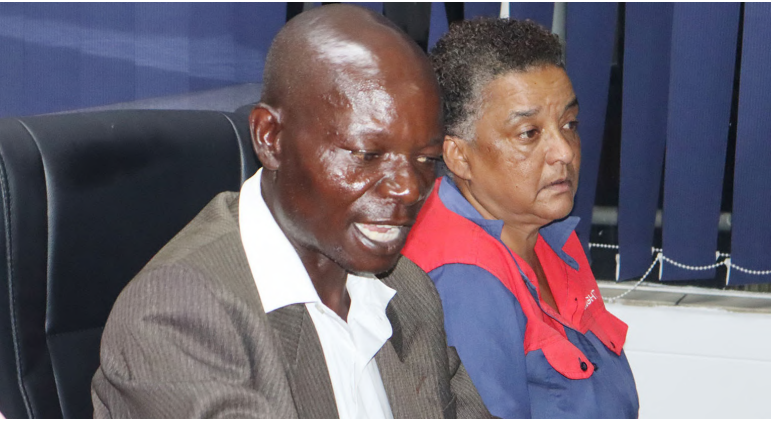 Maxwell Tauro (left) explains how he learnt of his son's (Challenge Tauro) death during the August 1 shootings in Harare after disputed election results.

MAXWELL TAURO cuts a depressed figure as he struggles to explain events that led to the murder of his son Challenge (20), who together with five other victims was shot in Harare’s central business district during the 1 August 2018 protests.

“I was hurt! This is still fresh in my head like it happened yesterday, and I feel like I am nothing in this country,” Tauro told a press briefing on progress made in compensating victims of the shootings that was held at The NewsHawks conference room.

“Government once called us in 2018, and there was talk about compensation over the killings, but nothing has been done after that.”

The victims’ families have fallen on hard times, and are yet to be compensated, four years after the dreadful ordeal in which six unarmed citizens were killed by the military in the wake of the 1 August shootings in which MDC-Alliance sup[1]porters were protesting the delay in the release of the 2018 general election results.

The victims were identified as: Challenge Tauro (20), Jealous Chikandira (21), Brian Zhuwawo (26), Ishmael Kumire (41), Gavin-Dean Charles (45) and Sylvia Maphosa (53). The incident has plunged Tauro, a farm labourer based in Mazowe, into poverty, as his deceased son Challenge was also the family’s breadwinner.

“I would always make prayers for him so he could succeed. We relied on him. When Challenge was killed, he was in town selling electronic gadgets for he was a vendor at Harare’s Gulf [marketplace], and the income was important for the family,” he says, whilst trying to hold back tears.

Tauro says he has been failing to make ends meet since then.

“I earn US$60, which is little, considering what I need for my family. Every month, we might need at least US$120, which I cannot raise alone. Challenge was one of the main people the family was looking up to.”

The Total Consumption Poverty Line (TCPL) for Zimbabwe stood at ZW$23 749.44 per person in July. This means an individual would require that much to purchase both food and non-food items as at July 2022 in order not to be deemed poor.

Tauro is rapidly sliding into poverty.

“If I go to the grave where my son is buried, most of the graves are now built-up. But, as for me, I cannot even afford to buy a brick to make him a proper grave. I have been getting solace from non-governmental organisations that have been providing help,” he says.

Allison Charles (55), from Arcadia suburb in Harare who also lost her brother Gavin-Dean Charles (48) on the same day, says the shootings have taken a toll on the child he left behind.

“He left a daughter who is in high school. She does not have a father … to pay her fees now. It is not only a monetary issue, but she does not have the emotional back-up that we had when we were her age,” Allison says.

In 2018, she approached the High Court, which asked the family to bring forward names of possible beneficiaries to the compensation package, but nothing has materialised.

“I lost the case, and we did not take it up. I asked myself how I could take on the government to court and win.

“No one has contacted us. I feel like the story has been swept under the carpet. The only time we hear about this story is on August 1 every year when journalists come to see — and of course re[1]mind us — about what happened. Otherwise as a family, we just sit back and suffer for the pain is ours to bear,” she says.

She has also lost trust in the Kgalema Motlanthe-chaired commission of inquiry which recommended the compensation of the victims’ families.

“I personally did not trust the commission of inquiry,” she says.

President of the opposition Labour Economists and African Democrats (Lead), Linda Masarira says there is little political will by leaders to speed up the compensation of the 1 August shooting victims.

“It (the commission) was not a valid process,” she said during the Press briefing. “It was a mere political process with no legal meaning. It was just a platform where people would say they had done something about the incident. Motlanthe himself is not a judge, and there was no tangible information that was presented.”

Masarira also said little has been done to investigate and bring to justice the perpetrators of the 1 August shootings.

“There was pictorial evidence . . . but no one has been pinpointed to say they committed the atrocities, which makes it difficult to hold to account. There has not been any political will from all political parties to ensure that the victims are compensated.

“I heard there were three of four victims’ beneficiaries whose fees is being paid by social welfare. We all know social welfare pays less than is required by the schools, which is not enough. I think if government was sincere about compensating the victims, they would have set up a special fund for those victims — or to just apologise,” she said.

“We have gathered that nothing has been done in regards with communicating with families of the deceased. In our respective view, government needed to have a structured approach.

“We were told there was a multi-sectoral committee with different ministries. That committee has not been functioning. We were expecting the inter-ministerial committee to be working with civil society and the victims’ families for transparency,” said Peter Mutasa, CiCZ chairperson.

Related Topics:August 1 shooting
Up Next

How MPs are controversially ejected