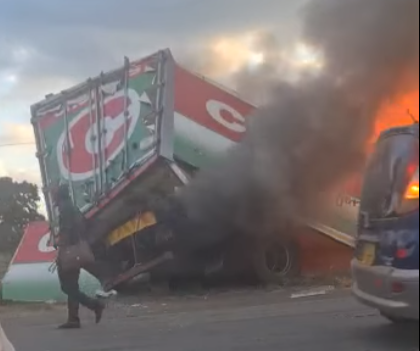 WHEN a Choppies supermarket haulage truck was involved in a road accident on Thursday in Ruwa, near Harare, a shocking spectacle ensued.

At first, stunned passersby just watched from a distance as fire erupted. But it did not take long for the mob to spring into action, looting the groceries while chatting excitedly about this glorious manna from heaven. Some were even risking their lives, continuing to grab the goodies even as the fire grew in size. People were prepared to die for a handful of cheap snacks.

That is how low Zimbabwe has fallen.

But it was the video depicting looters who were particularly overjoyed after fortuitously managing to get their hands on bottles of cooking — one of the most cherished items on any family’s grocery list these days.

Long-suffering citizens are learning from their failed leaders: looting is always an option in a country where nobody follows the rules anymore.

Less than a week after last Saturday’s announcement of catastrophic economic stabilisation measures by President Emmerson Mnangagwa, the price of a two-litre bottle of cooking oil has shot up from US$4.50 to US$7.50. Prices have gone haywire.

This is only the beginning. Soon, people will look back forlornly and realise just how much the cost of living has ballooned alarmingly within a short period.

Clueless government officials continue blaming the hardships on Russia’s invasion of Ukraine and the work of “economic saboteurs”.

Citizens are running helter-skelter this week as the reality of Zimbabwe’s economic crisis hits home.

As Zimbabweans began to feel the full impact of President Mnangagwa’s catastrophic ban on bank lending, many companies across the length and breadth of the economy have scrapped credit facilities. They are now trading on a “strictly cash” or “payment upfront” basis.

One of the affected firms, the sugar processor Tongaat Hulett, has told cane farmers that the company is unable to pay for produce in the wake of the dramatic government ban on bank lending. Economic experts warn that the country faces crippling shortages of basic commodities as producers and retailers rely on bank credit.

It is very difficult for companies to operate without access to working capital, overdrafts and other credit facilities. This is trite economics.

The ban on lending has plunged the entire economy into unmitigated chaos, spooking the markets and pouring petrol into an already volatile imbroglio.

There is only one logical outcome: ordinary citizens will bear the full brunt of hardships as the cost of living spirals out of control. There are no social safety nets in Zimbabwe. People still earn the Zimdollar, which is losing value at an astonishing pace, evoking painful memories of the hyperinflation of 2008 when prices were doubling every three hours.

Mnangagwa’s dramatic announcement last Saturday could now go down in history as a critical tipping moment. There is lots of chatter in the corridors of power these days suggesting that Finance minister Mthuli Ncube was also stunned to find himself at State House on that day of presidential drama.

If the Cambridge-trained professor is no longer being consulted, perhaps the time has come for him to come out in the open and salvage his much-vaunted technocratic credentials instead of perpetuating a charade. The government’s economic failures are now untenable.

Africa and the soldiers of misfortune