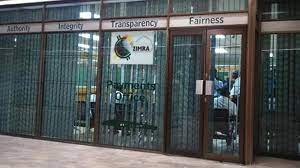 THE Zimbabwe Revenue Authority (Zimra), which operates a whistleblower facility in a bid to eradicate tax fraud and duty evasion, is caught in a damaging storm of corruption in which its senior officers are accused of collaborating with corrupt tax evaders for payment or to partake in attendant financial rewards, while endangering the security of whistle-blowers.

BRIDGET MANANAVIRE
This could have far-reaching consequences for Zimra’s bid to fight tax evasion and corruption if not swiftly dealt with.

The situation could lead to tragic reprisals against whistle-blowers who risk their lives in helping the tax collector to combat corruption and recover huge financial sums lost through criminality.

Under the facility, Zimra rewards legitimate whistle-blowers (informants) on cases relating to tax evasion under Section 34B of the Revenue Authority Act (Chapter 23:11) as read with Statutory Instrument 150 of 2020.

Statutory Instrument 150 of 2020, gazetted on 26 June 2020, regulates the payment of rewards to informants upon whistle-blowing and recovery of revenue.

The reward is 10% of the amount recovered on the basis of information supplied.

Zimra also undertakes to protect the identity of the informants at all times as provided for in the secrecy provisions of the Revenue Authority Act.

Documents obtained by The NewsHawks from Zimra, which claims its values include integrity, transparency and fairness, show that top officials at the tax collector are at the forefront of illegally and criminally collaborating with corrupt tax evaders for financial benefit without regard for the safety of whistle-blowers.

In one dramatic case which enveloped Zimra during the tenure of Faith Mazani as commissioner-general, three whistle-blowers reported a case in 2013 which has dragged on up to now.

The whistle-blowers had reported notorious Harare land baron Felix Munyaradzi to Zimra for tax evasion which has now ballooned to US$12 million. Zimra last month wrote to Munyaradzi demanding payment or else they would garnish his business accounts.

Mazani, now the new resident tax administration adviser for Afritac South, a collaborative arrangement between the International Monetary Fund, beneficiary countries and external development partners aimed at technical assistance and cooperation on macro-economic and financial management areas for southern Africa and the West Indian Ocean region, dealt with the case, but left it unresolved.

At the centre of the case is Zimra executive managers Jephat Mujuru, acting commissioner of customs and excise and Tapiwa Manyika, the director of loss control. Mujuru was acting head of investigations when the case was reported in the absence of Anna Mutombodzi, the Zimra commissioner for investigations and international affairs.

Other Zimra officials mentioned in the case include Lorraine Mhlanga, who worked in Mutombodzi’s office, and Lonto Ndlovu, who was replaced by Regina Chinamasa as commissioner of revenue assurance and special projects.

“The whistle-blowers approached Zimra way back in September 2013 to report Munyaradzi and his company Delatfin Investments (Pvt) Ltd for tax evasion. They had detailed information about the issue, including business dealings, financial records and bank accounts. Their issue was that Delatfin was evading tax and they had evidence to support that,” one document says.

“So Nyabadza, Macharaga and Kujinga reported the case in terms of Section 34B (2) of the Revenue Authority Act (chapter 23:11). They registered the case with Mujuru who was acting commissioner investigations as Mutombodzi was not around.

“In their report, the whistle-blowers highlighted tax heads covering Income Tax, Value Added Tax and Pay-As-You-Earn. They provided Zimra with detailed information, including bank records from a Stanbic Bank account and other banks. Delatfin was developing houses in Mount Hampden and Zvimba Rural District Council on a massive scale, but not paying tax.

“When the whistle-blowers arrived, they met Mujuru and Mhlanga who worked in Mutombodzi’s office dealing with investigations. After narrating their story, the case was accepted as solid and they were asked to fill in a whistle-blower’s form. Following the opening of the case, Zimra made a couple of verbal updates on the investigation, but things started changing in 2014.”

Documents say when the whistle-blowers, who had additional information, went to find out about the case in 2014 after a period of silence from Zimra, they got the shock of their lives.

“When the whistle-blowers arrived at the investigations office where they had initially made the report, they were told by Mutombodzi that there was no record of their case. The file on Delatfin was nowhere to be seen. Mutombodzi then directed them to Mujuru who actually was in charge of investigations in an acting capacity when the report was first made.

“When the whistle-blowers got to Mujuru’s office, he was hostile and told them that he didn’t know them and never received such a report against Delatfin from them or anyone. He chased them out of his office. The whistle-blowers then went to Mhlanga’s office and she confirmed that the case had been opened as she had personally done so. It became clear that Mujuru had become hostile and was acting in a strange way.”

As if that was not bad enough, the whistle-blowers were to further get shocked by how Zimra senior officials behaved unprofessionally and illegally towards them.

“In 2015, things got worse. The whistle-blowers then discovered that their case had been taken by senior Zimra officials and handed over to a purported whistle-blower who shares the same surname as the owner of Delatfin. So they found out that someone called Eriazere Munyaradzi was now the complainant against Felix Munyaradzi, which was strange. More so, his report was based on their report lodged two years earlier. Zimra officials had accepted Eriazeren Munyaradzi’s report against Felix Munyaradzi, and were now pushing for Eriazere to be paid his 10% of recovery which was significant given the millions owed.”

“I have never dealt with Zimra or Felix Munyaradzi and I don’t even know who he is,” Eriazere Munyaradzi said.

Later, when the whistle-blowers enquired about their case with the new information showing it had been corruptly hijacked and shifted to someone else, they were told that one of them, Kujinga, had withdrawn the case.

They demanded evidence to that effect, but Zimra officials failed to produce it. In any case, Kujinga denied the claim which they said was concocted by Zimra officials to hijack the case.

Documents say Zimra did not reject the Delatfin case because the evidence was solid. As a result, it did not write to whistle-blowers citing the standard rejection grounds such as the case was already under investigation, already reported or the information was inadequate.

From there, Zimra got locked in a heightened fight with the whistle-blowers and for the past six years the case has been raging, with calls, emails and messages flying back and forth.

The whistle-blowers, for instance, wrote letters to Zimra on 5 July 2019, 26 July 2019, 29 July 2019 and 6 December 2019 in a heated spate of exchanges amid accusations of collaboration, corruption, fraud, dishonesty, violation of the Revenue Act and breaching whistle-blowing principles.

In the 5 July letter written to acting commissioner-general Rameck Masaire, the whistle-blowers said “Zimra insiders are giving outsiders cases reported to them for corrupt financial benefit”.

On 26 July, Masaire wrote to the whistle-blowers saying Kujinga had withdrawn the case and “having considered the facts above, please be advised that the case was duly closed”.

On 29 July, the whistle-blowers rejected Masaire’s claim, saying their case had been stolen and reward money paid to those who helped to hijack the report.

“This is certainly a case of robbery involving a cartel in Zimra which clandestinely robbed us of our confidential information and parcelled it out to their preferred candidate in return for kickbacks,” the whistle-blowers said.

“It is also a case in which officials who are vested with the processing of issues of confidentiality and integrity deliberately abused their duty of trust.”

The letter added: “It is very disturbing for the tax authority which is charged with such a confidentiality function to abuse its fiduciary duty and to deprive legitimate whistle-blowers of their just and lawful entitlement to a monetary reward”.

On 6 December, the whistle-blowers escalated the issue to Zimra acting board chair Josephine Matambo. “Clearly, this is fraud and dishonourable conduct which not only taints the image of senior officials, but also puts the whole organisation into disrepute. Mujuru committed fraud on this matter,” the whistle-blowers said.

Contacted for comment Zimra said it will look into the issue.